Sydney to Hobart organisers have been urged by the race’s biggest names to modernise after two-handed boats were barred from winning the overall prize due to their use of autopilots.

This year’s race includes 18 pairs competing in the inaugural shorthanded division – which features boats crewed by just two people – but they will not be eligible for the handicap prize, the Tattersall Cup.

Race organisers say they have been unable to factor autopilots into the handicap system but will hopefully sort the issue before next year’s race.

However, skippers in the division claim traditionalist sailors have pushed back on introducing the boats to the event, arguing the use of autopilot systems, which replace a human helm, should not be included.

The race’s three maxi yacht competitors have defended their colleagues in the two-handed category.

Scallywag skipper David Witt said the fact they could not win this year’s overall prize was “ridiculous”. 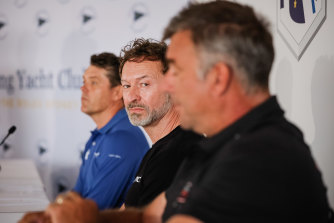 LawConnect skipper Christian Beck (centre) and some of the Sydney to Hobart’s biggest names have thrown their support behind the 18 boats ineligible to win the overall prize. Credit:CYCA/Salty Dingo

“You can’t have a two-hander without an autopilot,” he said. “So, if you’re going to have him in the race, it shouldn’t even be a subject of discussion.

“I find it ridiculous that you can enter a race, but you are not allowed to win to be honest. I’ve never seen that in any other sport. If you’re allowed to go in the race, you should be allowed to win it.”

The two-handed fleet will instead race for a new trophy, awarded to the overall winner out of the 18 boats in that division, which are part of a total fleet of 93 this year.

Earlier in the week, Cruising Yacht Club of Australia Commodore Noel Cornish said he understood the frustrations of crew members in the division, but said organisers didn’t want to “stuff up” the introduction of the modern boats.

Two-handed boats have become hugely popular in recent years as the cost of an ocean race campaign is significantly less than on a larger boat with a bigger crew.

Mark Bradford, the skipper of super maxi Black Jack, said the race needed to embrace the new form of sailing as it becomes the future of the sport.

“We all use control systems to manage all sorts of systems on board,” he said. “So having an autopilot is no different to having a canting keel, in my view.

“I tell you what, if someone wins the Sydney to Hobart race on a two-handed [boat], I’ll be the first person to shake their hand.”

Christian Beck, the skipper of super maxi LawConnect, said he wasn’t even aware the two-handed boat entrants could not win the overall prize.

“I feel for them,” he said. “I like the idea of the two-handers and I understand why they need [the autopilots]. It doesn’t worry me.”