Over time, Tamika Catchings reached an understanding about her lifelong hearing impairment. If it had once led to childhood taunts and later to some communication breakdowns with her college basketball coach, Tennessee’s Pat Summitt, Catchings came to realize that her impairment wasn’t an impairment at all.

Rather, it was her “superpower,” as she put it.

She is certain she compensated for her “moderate to severe” hearing loss with a court awareness that was second to none — that she was more capable of discerning all that was happening around her and, crucially, more apt to anticipate what was about to happen. That was particularly true on defense, she believed, and who’s to argue? While her other career numbers — 16.1 points, 7.3 rebounds and 3.3 assists per game — reflect all-around excellence, she won the W.N.B.A.’s Defensive Player of the Year Award five times in her 15 seasons with the Indiana Fever. Five years after her retirement, as she prepares to be inducted into the Basketball Hall of Fame on Saturday, she still holds the league’s career record for steals.

So, yes, a superpower.

Scientists have a name for it when a person deficient in one of the five senses sees the others sharpen: cross-modal plasticity. It happens automatically, not through any conscious effort. The body understands there’s a need, and adapts.

In her 2016 book, “Catch a Star,” Catchings recounted a time in elementary school when she and her sister, Tauja, were engaged in a one-on-one game in the driveway of the family’s Illinois home. Things grew heated, as they often did.

That’s when their father, Harvey, not far removed from an 11-year N.B.A. career, emerged from the house and demanded that the girls relinquish the ball. While Tauja repaired to her room, Tamika remained in the driveway, dribbling and shooting an imaginary ball — just going through “a silent drill in her head,” her mother, Wanda, said.

Harvey was incredulous. Tamika, he says now, “took it to a whole different level.”

She would, in time, lead two different high schools to state championships. She would win a national title early in her college career and a W.N.B.A. title late in her professional career. She would win four Olympic gold medals. As a pro, she would win the awards for rookie of the year and most valuable player and be named to 12 all-league first or second teams.

This weekend, in a ceremony postponed from last August because of the coronavirus pandemic, Catchings, now 41 and an Indiana Fever executive, will be inducted into the Hall of Fame as part of a heavyweight class that also includes the N.B.A.’s Tim Duncan, Kevin Garnett and Kobe Bryant.

She is the first women’s player from the University of Tennessee to be enshrined, news that gave her pause. Surely, she figured, another Lady Vol had made it, given Summitt’s success over a 38-year run that ended in 2012, four years before her death.

But no. Maybe that shouldn’t be as big a surprise as it might seem.

“I just had ‘it,’” Catchings told reporters after she learned of her induction in April 2020. “I had the drive, the passion, the determination, the focus, the attitude, the will.”

Her story is a family story. It started with Harvey Catchings, a journeyman center who played for the 76ers, Nets, Bucks and Clippers before spending a season overseas.

Harvey and Wanda Catchings’s children arrived early in Harvey’s career — a son, Kenyon, in 1975, Tauja two years later and Tamika not quite two years after that. Harvey taught them the game at a young age, regularly convening no-nonsense workouts. Kenyon and Tamika took to this approach. Tauja, not so much.

“They tease me,” she said, adding, “Mika and our brother absolutely loved basketball, and I was kind of eh — I could take it or leave it.”

Tamika was, in fact, “like an addict” when it came to the game, as her father once told The New York Times.

She didn’t always appreciate her dad’s tutelage. As she put it in her book:

For a lot of years, I couldn’t get Dad to hear me. His “coaching” made me feel, once again, like I didn’t fit in, that I wasn’t acceptable. I felt silenced. For a long time, I just took it all in and stuffed it, all the hurt and frustration and confusion about how to get him to see I could play the game well my own way.

Ancient history now, in her eyes.

“Yeah, it was a little crazy at times,” she says now, and laughs. “He still drives me crazy, every once in a while. But you know what? That’s my dad.” 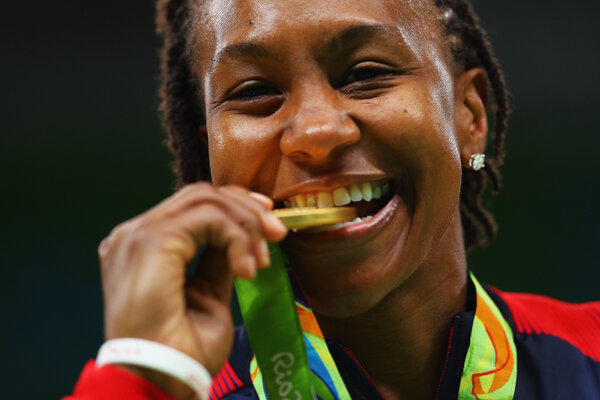 Looking back, she said he might have pushed her to “a level that I might not have been able to get to on my own.” When she was in seventh grade, she scrawled on a piece of paper that it was her intention to play in the N.B.A. — not the W.N.B.A., as it did not yet exist — and taped it to her bedroom mirror.

As a sophomore, she combined with Tauja to lead Stevenson High School, in Lincolnshire, Ill., to a state title. But the next year the family reached a crossroads. Harvey and Wanda divorced after 22 years of marriage, and Wanda decided to move to Texas, where the family lived when Tamika was in elementary school. Kenyon was at Northern Illinois University, his promising basketball career having ended in high school because of a health issue.

But what of the girls?

“As much as we’d already moved, it’s my senior year — I’m not moving,” said Tauja, who later played at the University of Illinois and overseas. “And I wanted to stay with my dad, too.”

It was another matter for Tamika, who reluctantly headed to Texas with her mother. She won her second state title, at Duncanville High School, near Dallas, in 1996-97, a tribute not only to her growth, but also to her burgeoning superpower.

When she was young, she watched TV with the sound off to learn how to lip-read. But elementary school bullies targeted her because of her clunky hearing aids, and in third grade, she chucked them into a field, never to be found.

It wasn’t until she arrived at Tennessee in 1997 that she resumed wearing hearing aids regularly. Summitt noticed early in Catchings’s freshman year that she wasn’t immediately picking up on instructions and recommended the devices — smaller ones this time.

That was the year Catchings helped deliver an undefeated 1997-98 season and the sixth of Summitt’s eight national titles. Two years later, Tamika was named Naismith College Player of the Year, setting the stage for all that followed: the Olympic golds, the individual honors and a W.N.B.A. championship in 2012.

Her drive was like that of Bryant, whom she met in Italy when their fathers, once teammates on the Sixers, played there. But she was most like her father. After each of her professional seasons, she asked for his advice. He told her something he had been acutely aware during his career: that somebody is always gunning for your job, so it’s vital to stay hungry, to just keep pushing.

In August 2019, the roles were reversed. Harvey Catchings was the one in need of support, and Tamika was the one offering it. By then, he was 68, had settled near Houston and had just undergone a heart transplant.

“I told him, ‘This is God giving you another opportunity to live life, so what are you going to do with it?’” she said.

Harvey Catchings, who lost nearly 70 pounds during his hospital stay, soon regained most of the weight — and with it, his stamina. He’ll be at his daughter’s side when she is inducted into the Hall this weekend.

Yet she wasn’t certain this day would come. She went for a drive the afternoon of April 3, 2020, the day the finalists for the Hall of Fame would find out if they were selected, “just to get all this angst out.”

Then the call came from John Doleva, the Hall of Fame’s president and chief executive.