There were some familiar names on the court last week at the National Basketball Players Association Top 100 camp.

For years, they were among the biggest names in the NBA. And fans might see those names return to the league again in the near future. Zaire Wade, Jace Howard, Jamal Mashburn Jr. and Jabri Abdur-Rahim — sons of those former NBA stars — are trying to navigate their own way to the NBA.

Each is starting establish himself in basketball, and they were all invited to the camp to showcase their game at the University of Virginia.

“Everything he knows, he’s imparting wisdom on me,” said Mashburn Jr., a 17-year-old senior at Brewster Academy in Wolfeboro, New Hampshire. “It’s great, I’m trying to soak it all in as much as I can and just take it step by step.”

Their love of the sport came differently than most. Instead of watching games on TV, they were there, sitting up close and watching their fathers on the court. They saw the day-to-day life of an NBA player firsthand.

Jace Howard, a senior at the University School in Miami, remembers seeing his dad, Juwan — the former Fab Five star and new Michigan head coach — “crying like a baby” at home after losing to the Dallas Mavericks in the 2011 NBA Finals. He was in third grade and didn’t know what to do to comfort him.

The following year was a different story. The Miami Heat defeated the Oklahoma City Thunder to win the title, and Jace ran onto the court to celebrate with his dad. Juwan surprised him later with a championship ring of his own, something he had always asked for but never imagined he would get.

“Putting that on, it was like, ‘wow.’ The whole player's-long dream throughout their whole life was to get that, and I have it on my hand, on my finger right now,” Jace said.“It was pretty crazy.”

Zaire Wade, the 17-year-old son of Dwyane Wade, and Jace, also 17, have vivid memories of being drenched in confetti and touching the championship trophy. 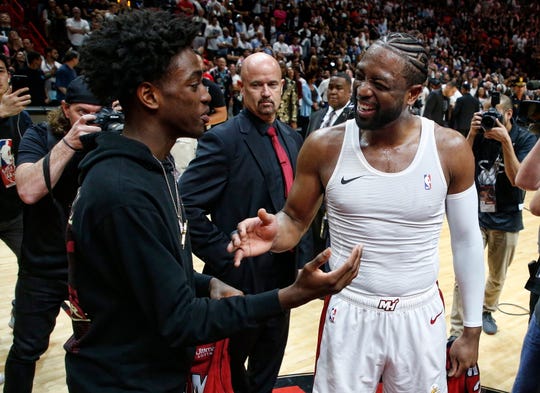 Jabri Abdur-Raheem, who will be a senior at Blair Academy in Blairstown, New Jersey, said he would go early to his father’s games whenever he could to see players warm up, especially when Kobe Bryant or LeBron James were in town. He used to hear the announcer call Shareef’s name, but at a young age, he had no clue why.

“That’s definitely what got me wanting to play in the NBA,” Jabri said. “I definitely came to the conclusion that at some point, this is what I want to do because I [saw] my dad do it, and I [saw] how much fun he had, and I [saw] how he loved it. So that just inspired me to do what he did.”

Jamal Mashburn Jr. doesn’t remember much of his father, Jamal Sr., in his prime, but they have watched YouTube videos of his days in the league. Whenever they watch his 50-point game against the Chicago Bulls in 1994, the senior Mashburn reminds him, “I’m a bucket.”

On Father’s Day, each will be traveling home from the Top 100 camp, but they’ve still got gifts for their dads.

Zaire wouldn’t reveal his plans. “I’ve got to keep that a secret away from everybody, but I’m getting him something special,” he said.

Jace, proud of his pops for landing the Michigan coaching job, plans to get him something that features the university's logo.

Jamal is writing his dad a note, explaining how much he means to him. And Jabri said he wants to get Shareef something basketball-related and “give him a big hug.”