Tokyo ‘not one bit’ your father’s Olympics: Sports reporter

Chris Smith of Sports Business Journal discusses his experience being in Tokyo and covering the Olympics amid the coronavirus pandemic.

When Toyota Motor Corp. said this week it wouldn’t run any ads in Japan tied to the Olympics, it sent a message louder than any TV commercial about the host nation’s grim mood.

Toyota is Japan’s most valuable company and a global Olympics sponsor, the top rank shared by only 13 others world-wide. For U.S. audiences, it spent millions of dollars on a Super Bowl commercial featuring the Olympic rings. But in Japan, any link to the Games was too sensitive for the auto maker to advertise.

The Olympics open on Friday a year late and during a Covid-19 state of emergency in Tokyo. Anticipation and expectations for an economic windfall have largely evaporated. Stadiums and arenas that cost over $7 billion to build or renovate for the Games will be mostly empty after spectators were banned.

Japan wanted the Tokyo Olympics to show the country is still a global force despite its declining population and a maturing economy eclipsed by China. The Games would also show how Japan rebounded from a devastating tsunami in 2011. Instead, the Olympics has compounded a malaise over the pandemic that has put its leader under pressure to keep his job.

Prime Minister Yoshihide Suga said he was confident that extensive measures to keep the public away from the event would prevent the spread of infection and that the country will still benefit from a huge global television audience.

"I decided that the Olympics can go ahead without compromising the safety of the Japanese people," Mr. Suga said in an interview. "The simplest thing and the easiest thing is to quit," he added. But "the government’s job is to tackle challenges."

Japan’s athletes could yet change the mood with medal-winning performances. But the days before the Games have been dominated by trepidation. At least eight athletes who have traveled to Japan for the Games and dozens of others connected to the Olympics have tested positive for the virus. Many players of the South African men’s soccer team have been put into isolation after close contacts of two of its members tested positive.

Organizers are pressing ahead with an Olympics-for-TV that few Japanese will witness or see any financial benefit from.

KNT-CT Holdings Co., which operates one of Japan’s biggest travel agencies, had marketed travel packages to the Olympics. "It is very unfortunate that we cannot provide tours to our clients who had been looking forward to the Games," the company said.

Yoshiko Tobe spent more than a million dollars to complete a renovation in 2019 of her traditional inn near Asakusa, an area of Tokyo with an old-world feel where sumo wrestlers wander the streets between training bouts.

Ms. Tobe hoped visitors to the Olympics would provide an initial return on investment. Her views now reflect those of a swath of the Japanese public. Nearly two-thirds don’t expect to enjoy the Games, according to a Mainichi newspaper poll released Sunday.

"We might be better off without the Olympics. At least that would eliminate one risk factor for the spread of infection," Ms. Tobe said.

It is a long way from where Japan started nearly a decade ago in its quest to host the Summer Olympics. At the 2012 London Games, widely hailed as a success, Japan earned its best-ever summer haul of 38 medals.

Then-Prime Minister Shinzo Abe said hosting an Olympics would lift the country’s spirits after the 2011 tsunami that killed almost 20,000 people. And local organizers forecast a flood of visitors to Japan for the Games who would spend nearly $2 billion on meals, transport, hotels and merchandise. They thought the 17-day spectacle would motivate others to visit Japan, bringing in billions more.

By 2019, most venues for the Games were finished on or ahead of schedule, and ticket demand was high. Other than Tokyo’s summer heat, there were few of the concerns about readiness that have dogged Olympics host cities in years past.

The International Olympic Committee called Tokyo the best prepared host city in Olympic history. Banners for the Games went up around the city and sponsors mapped out marketing plans to cash in on the feel-good factor.

A decision in March 2020 by Japan and the IOC to postpone the Games by a year represented a gamble that the pandemic would be contained by the summer of 2021.

That didn’t happen. In the weeks before the Games, the Delta variant drove rising infections around the world, including in Tokyo, where more than 1,000 new Covid-19 cases have been diagnosed on most days recently. As of Monday, just 22% of the population is fully vaccinated, and Tokyo’s state of emergency is set to continue through Aug. 22.

Infections have been reported among almost every group of people involved in the Games, from athletes to coaches to IOC officials, as well as contractors and the media. In the Olympic Village, which athletes can only enter after a series of tests before and after their arrival in Japan, the first cases of infection have surfaced.

The number of people coming from overseas for the Olympics has been reduced by around two-thirds. Still, more than 50,000 athletes, officials, reporters and others are converging on Tokyo for the Games, making it the largest international gathering since the pandemic began.

Organizers say dozens of rules limiting interaction will prevent wider outbreaks. Visitors are being kept away from the local population, under threat of expulsion if they break the rules.

"There’s no question that from an operational delivery standpoint, this is possibly the most complex and challenging Games delivery there’s ever been," said Michael Payne, IOC marketing and broadcast rights director from 1983 to 2004.

A poll conducted by public broadcaster NHK between July 9 and 11 found that nearly two-thirds of Japanese weren’t persuaded that the Olympics should be going ahead. Several polls in recent days show that Mr. Suga, Mr. Abe’s successor, enjoys support of only about a third of the public, a new low. 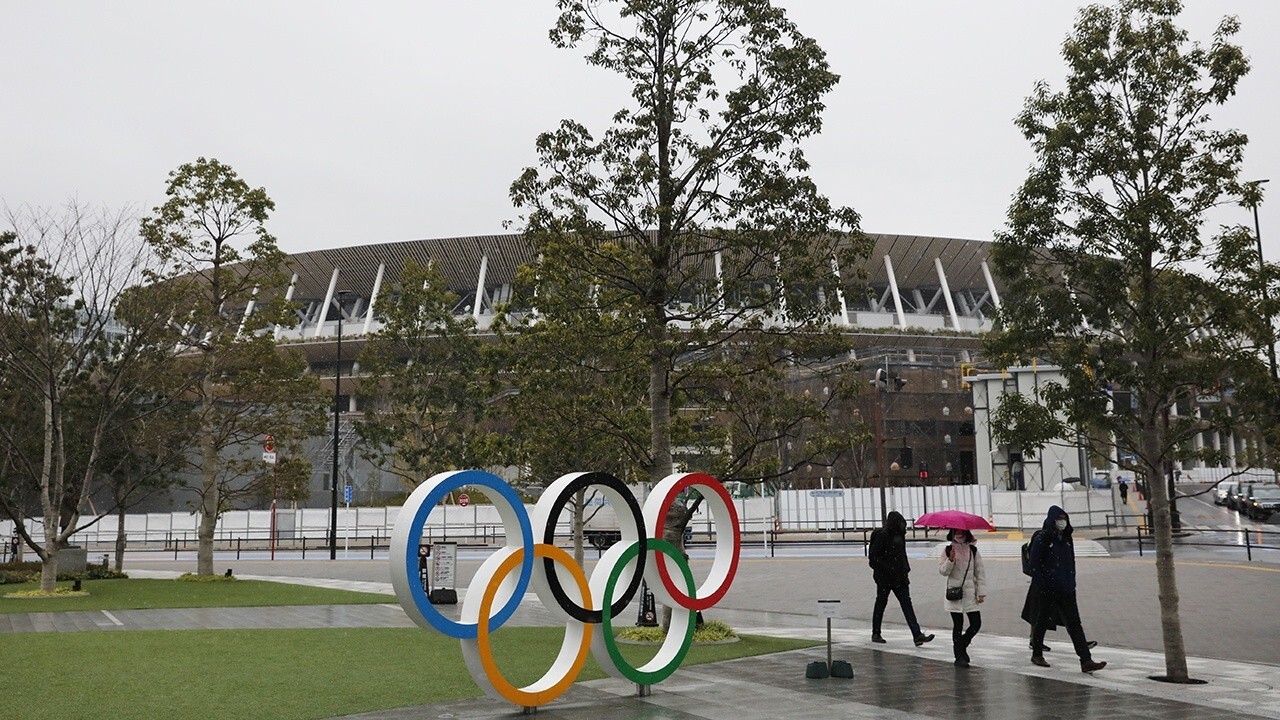 Should Tokyo Olympics be canceled due to coronavirus?

Physician, cardiologist and K Roc Consulting President and CEO Dr. Kevin Campbell on the safety of traveling to places like Japan or India amid the coronavirus pandemic, as well as vaccination rates in the U.S.

Some Japanese feel that the event is being railroaded through by the IOC, which the IOC denies. Around 73% of the IOC’s budget is funded by selling broadcast rights to the Olympics.

In late May, IOC member Dick Pound said only Armageddon could stop the Games from taking place, adding later that the Olympics would go ahead even if Mr. Suga wanted them to be canceled.

Since his arrival in Japan earlier this month, IOC President Thomas Bach has been trailed by a small but vocal group of anti-Olympic protesters at every turn, including when he visited Hiroshima to lay a wreath at the memorial for the 1945 atomic bombing of the city.

"We are very well aware of the skepticism that a number of people have here in Japan," Mr. Bach said this week. "That such a discussion is becoming more heated and more emotional in the situation of a pandemic is something we have to understand."

Mr. Abe, then prime minister, made a pitch for Tokyo at the IOC meeting in Argentina in 2013 that decided the 2020 host city. He had hoped to preside over the Games but had to resign in August 2020 because of poor health.

Mieko Nakabayashi, a professor of political science at Waseda University in Tokyo, said Mr. Abe still looms large in Japan’s decision to stick with the Olympics. This fall, Mr. Suga wants to be re-elected as ruling party leader and as prime minister, and he needs the support of Mr. Abe to do so, Ms. Nakabayashi said.

"He couldn’t announce, for example, that he would rethink the Olympics," she said, "because he has to be loyal to Mr. Abe."

One major change Mr. Suga made was to bar local spectators after a surge in infections earlier this month led medical experts to warn of the risk of large gatherings. Overseas spectators were banned in March.

Empty stadiums—with the exception of a few events outside Tokyo—will deprive Japanese athletes of the hometown cheering that usually helps the host nation boost its medal count. Organizers say they will use recordings from past Games to create the effect of spectators.

At the 2012 London Olympics, big viewing centers in parks and city center squares helped overcome initial public skepticism and turn the Games into one of the most popular and successful sporting events in the nation’s history. Japan planned to have public viewing too. After protests, the plans were canceled, and the government has told people to watch at home.

Kyoko Ishikawa has attended all seven Summer Olympics as a spectator since the 1992 Barcelona Games. She had secured tickets for two events each day during the Tokyo Games, including the closing ceremony, but was forced to give them up.

"For me, this Olympics is the closest and yet the furthest away in 30 years," said Ms. Ishikawa.

Tokyo organizers have said some Olympic and government officials and sponsors would be allowed at the otherwise spectator-free venues. Those people will fulfill essential roles such as presenting medals, supervising sports and observing operations for the benefit of future Olympics.

Such a policy could fuel resentment among many in the public who already see Olympic officials as entitled, said Phil Sherwood, who was London 2012’s head of volunteering and workforce training.

"I think allowing them into stadiums without spectators could have reputational damage on the Olympic movement," Mr. Sherwood said.

For its part, Toyota said none of its executives including President Akio Toyoda would attend the opening ceremony.

As with almost every Olympics, the budget for the Tokyo Games ballooned from initial projections. The official budget is $15.4 billion but Japanese government auditors have said total spending tops $20 billion, almost three times the original forecast of around $7.4 billion when Tokyo put together its bid for the Olympics.

Japanese sponsors contributed over $3 billion, the largest amount by host nation companies for any Olympics.

To be sure, even the worst estimates of losses from the Games are less than a percentage point of the size of Japan’s economy. Takahide Kiuchi, an economist at Nomura Research Institute, said there was still a potential payoff from people overseas who will watch the Tokyo Games and may decide to visit Japan after the pandemic.

"Restaurants and hotels that have renovated their facilities to welcome foreigners won’t be wasted," he said. Olympic stadiums and arenas will also eventually have events with spectators.

The biggest economic risk is the same as the health risk that led many Japanese to oppose the Games: a possible Covid-19 superspreader event. That would leave Japan with a longer road to recovery and a need to spend far more.

To read more from The Wall Street Journal, click here.