It's time for extra time. 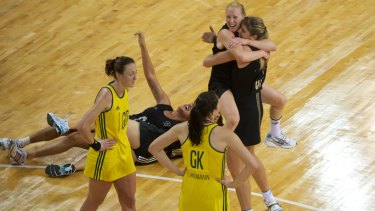 Australia lost to New Zealand after an extraordinary 22 minutes of overtime (including an unbelievable eight minutes of double extra time) at the 2010 Commonwealth Games final.Credit:Jason South

Nobody likes a draw. Not the players, not the fans at the game, not the viewers at home, and not those of us tasked with talking up the game.

If Super Netball wants to continue to grow as a premier sporting competition, the "draw" must be done away with. With three such results in the opening rounds, it's a live issue within the league, and one that must be addressed before next season.

The answer is, of course, to play drawn games into extra time. This has traditionally involved playing two extra seven-minute halves, and if the teams still cannot be separated at the end of that the game, then we go into double extra time, in which play continues until one team is ahead by two goals.

Some of the greatest netball games in history have been decided in this way. Most notably, the 2010 Delhi Commonwealth Games final, which Australia lost to New Zealand after an extraordinary 22 minutes of overtime (including an unbelievable eight minutes of double extra time).

While extra-time games are super exciting (for everyone except the players, who find them super exhausting) they are also super long. That just isn't an option for Super Netball. The problem is that from a broadcast point of view, it's a risky proposition to telecast a game that doesn't have a specified end point. All television stations run to a strict schedule, and running a sports event for several minutes later than scheduled can cause huge headaches later on.

That doesn't mean there isn't a solution. In fact there is, and it is simple. When a game is drawn in Super Netball, we should play to a result by moving straight to the double-extra time rules. The league would need to decide whether to give teams a minute or two break before playing sudden death, or whether the umpire just blows her whistle and then play continues.

Either way, in order to create a degree of certainty for broadcasters, netball could look to Rugby League's "golden point" for guidance. Essentially it is a hybrid of our extra time and double extra time rules. Specifically, where a match is drawn at the end of regular time, teams play two five-minute halves and any point scored in that time determines the winner.

So in Super Netball there could be two extra-time halves of five minutes apiece. During this time, if a team were to take a two-goal lead at any point, they would win the game. Call it golden goal, or golden goals if you want to be pedantic and acknowledge that you need two goals to win. That way you are almost certain to get a result within the allocated time. If at the end of extra time the game is still drawn, the result stands and the competition points are split.

Sure, there is the risk that there isn't a result, but it's a small one. Since the golden point rule has been adopted in rugby league, just 13 games in 16 years have remained a draw after full time.

Golden goals would be simple, fair and exciting. It would reward players and fans, and be easy enough to deal with from a broadcast point of view. Why Super Netball isn't already doing it is beyond me.