Lars Burgsmüller remembers telling himself he could beat Rafael Nadal on the red clay at the French Open.

Burgsmüller, after all, was a well-regarded 29-year-old veteran on the pro tennis tour. Nadal, only 18, was little known outside the game and was just beginning to write a remarkable story of Grand Slam brilliance.

“I thought if I play my game, maybe I have a chance,” Burgsmüller said, recalling that windswept afternoon in late May 2005. “Maybe I can pull off the win.”

As you probably guessed, no such luck.

Instead, Burgsmüller became the answer to a trivia question. He was Rafael Nadal’s first opponent at Roland Garros. And Nadal’s first victim in a list that stands at a clean 100 as this year’s tournament begins Sunday.

Much has changed in the world since 2005. But not Nadal. If he emerges with the title, it will be his 14th there. That would give him 21 major championships, the most in men’s tennis, one more than Roger Federer.

So, would that make Nadal the best male player ever?

I took that question to Burgsmüller, who has both experience on his side and a cleareyed distance from tennis.

Three years after that Nadal match, having retired, he did something unusual for a professional athlete: He went to medical school and studied radiology. Now he is Dr. Lars Burgsmüller, 45, a physician treating cancer patients at a hospital in Essen, Germany.

It’s a world away from his playing days, when he squared off against, and lost to, each of the so-called Big Three in men’s tennis.

“They are all so close,” he said, during our recent video call. “Too close to judge. Each has been so consistent over the years. Each has his own strengths.”

Nadal, he said, suffocated and punished opponents, particularly at the French Open, the most grueling of the major tournaments because of its slippery and uneven clay surface.

Federer slashed so many smooth, fast stiletto winners that losing to him felt almost painless.

There are no holes in Novak Djokovic’s game.

To Burgsmüller, they are equals. But every year when the Open rolls around, he remembers young Nadal with particular fondness.

He smiled, recalling the locker room chatter at Roland Garros back in 2005.

The players knew that Nadal, who had established a foothold on the men’s tour but had missed the French Open in the previous year because of an injury, was soon to emerge as one of the best. But that meant a guy who could win a few major titles, not 20 or more.

All Nadal needed to break through, his fellow pros thought, was a little more seasoning.

“I didn’t want to listen to that too much,” said Burgsmüller , ranked No. 96 in the world at the time. “I tried to stay with my plan, to play my game.”

That meant pressing the attack.

He tried, but he quickly sensed that playing Nadal was unlike anything he had ever experienced. He had never faced anyone with such intensity. Or anyone who hit with such devastating topspin. Or anyone better able to sprint across a clay court, slide and stay balanced, and send balls back as scorching replies.

Again and again, Burgsmüller thought he had won a point with a winning shot, only to see Nadal not only keep the point alive but smack back a winner.

“Pretty early on, I could see he was better than I was,” said Burgsmüller, who was good enough as a pro to win nearly $2 million in prize money.

The first of Nadal’s 100 Roland Garros victories ended quickly, with the Spaniard stretching wide for a backhand passing shot that rocketed across the net with no retort. 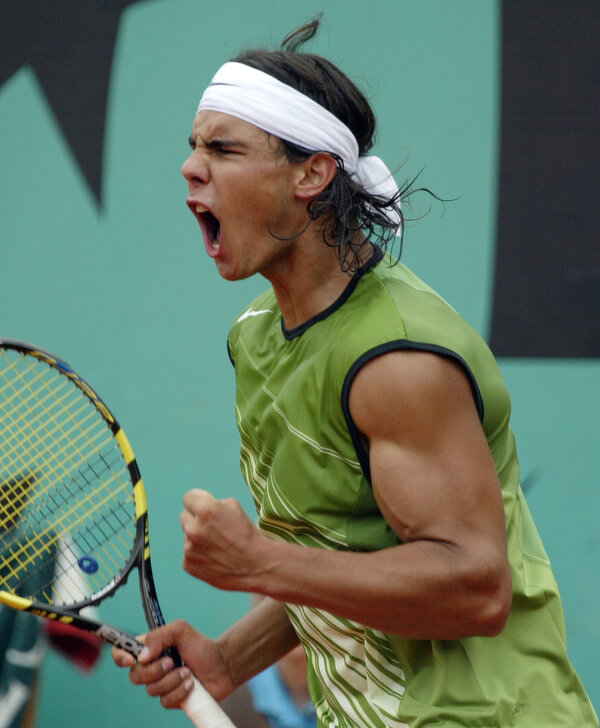 Though slimmer and baby-faced compared to the solidly built 34-year-old we see today, Nadal would march through the draw with little opposition. It was one of the most remarkable debuts in tennis history. He beat Federer, who was then ranked No. 1, in the semifinals. He then thumped his way to a win in the final and raised the champion’s trophy.

Between then and now, Nadal has lost only twice at Roland Garros.

If he defends his title this year, the arguments about the GOAT, the greatest male player to grace the game of tennis, will heat up once again. Such wrangling has been a hallmark of tennis in the 2000s, an era dominated not only by the men’s Big Three but by Serena Williams and her haul of 23 Grand Slam titles in the women’s game.

It can be an entertaining debate, no doubt. It keeps fans and pundits alike preoccupied. It sells tennis, same as similar arguments sell other sports: Who you got, LeBron James or Michael Jordan? Leonardo Messi or Cristiano Ronaldo?

Even if Nadal tops Federer for the most Grand Slam titles, is Nadal the better player? No, they’ve won enough, taken enough bites out of each other’s hides in classic matches, to remain linked forever, side by side.

Are those two better than Djokovic, whose haul of 18 major championships would have been unthinkable just two decades ago, when Pete Sampras topped the Grand Slam list with 14? Short answer: no.

And who can say what the all-timers of past eras could have accomplished if they had grown up in the current era?

In the 1970s and ’80s, Bjorn Borg won the French Open six times. Compared to the aerodynamically sculptured graphite instruments of destruction used today, Borg’s rackets look like an old-time carpenter made them out of pickup sticks.

I get it. We live in a world fueled by the need to argue. A world where we seem pushed to quantify and categorize and, most of all, figure out who is the top dog.

But I also believe we’re best served by setting debate well aside. Why can’t we simply say that the players who rise far above the field possess equal measures of brilliance?

Having found himself across the net from genius more than once in his day, Burgsmüller agrees.

At the end of our chat, he paused for a moment to reflect, thinking back on squaring off against maestros of tennis, on that long-ago duel at Roland Garros and his small part in Nadal’s still-unfolding story.

“At the time, that was just another match for me,” he said. “I was disappointed to lose. But now when I look back, I can see that I was part of an important moment. Nadal really started with that match, on that date, and I was the one he played.