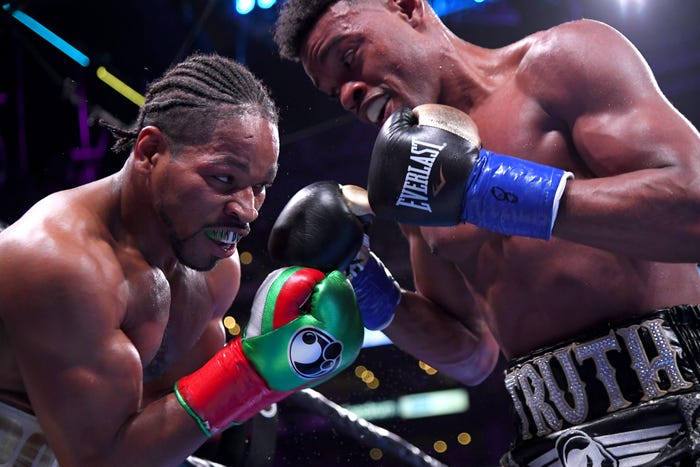 There are things a fighter can do to recover from a brutal knockout, the former two-time welterweight champion Shawn Porter told Insider recently.

Porter will commentate on the Fox Sports pay-per-view boxing show Saturday at the AT&T Stadium in Arlington — a card which is headlined by two athletes he has previously fought, Errol Spence Jr. and Danny Garcia.

One of the main storylines leading into 147-pound championship bout regards the mental and physical state Spence is in. The Texan returns to the ring for the first time since crashing his $300,000 Ferrari at high-speed last year.

Spence was taken to hospital, and though he posted a photograph to social media where he looked disfigured, he did not suffer any broken bones.

It begs the question whether he'll be the same fighter this weekend as he was before the crash.

There are some who believe that once a combat athlete has been viciously knocked out, then they will be prone to being finished again in the future.

Porter believes "it depends on the fighter."

"A lot goes into a knockout. Even beyond that, what rehabilitation do you take your body through to recover from that knockout," he told Insider.

"I don't think a lot of fighters know this but there's things you can eat, exercises you can do, and of course there's just time away from the ring.

"All of those things can help you physically and mentally come back from being knocked down, knocked out, and things of that nature."

Garcia's training would presumably have been easier than Spence's, Porter said

Spence, who is ranked by Insider as America's best boxer, said last month that it took three or four sparring sessions to return to normal after last year's horror crash.

But Porter told us it's hard to imagine he could have been sparring at the required intensity for a world title fight such as this.

"The tough part about it for Errol is I don't think he can spar at the same intensity that he would fight.

"He won't be able to take the intensity of a sparring session that he would into a fight and I think in turn it may take Errol a round or two to warm up, whereas not taking that long layoff and having opportunities to spar at the same intensity of a match would help him be more prepared for a fight.

"Both guys have been off because of COVID, but the preparation for Danny Garcia would be easier because he can take his intensity up in training, and not be in as much as risk or danger as Errol Spence."

Porter has inside knowledge as he has fought both guys

Porter has a record of 31 wins (17 knockouts) against three losses and one draw. Against the two fighters competing in Saturday's main event he is 1-1.

Porter beat Garcia by decision to win the vacant WBC welterweight title in 2018, but after one win over Yordenis Ugas in his first defense of the belt, he lost the championship to Spence by split decision in a title unification bout.

Both those belts will be on the line in the Spence and Garcia fight.

For Porter, competing with Garcia provided the most surprises.

"Everything that happened that night with Errol Spence Jr., were all things that I had expected and had seen from him," he told us. "I don't think his speed was any different than I expected, defense … nothing."

An extraordinary in-fighter with a great box of tricks, Porter said it's his "eye for boxing" that helps push Spence into that elite tier of combat competitor.

"He's really got an eye for boxing," he said. "He's got a good feel for what's happening in the ring, and what needs to happen in the ring.

"He's very consistent with his offense and his defense. It's all a combination of feet, and a combination which is hard to defeat."

On Garcia, Porter said: "I think maybe the only thing I experienced in the Garcia fight that may have caught me by surprise a little bit was his toughness — he's tougher than I expected, and has more heart than I anticipated.

"Not only did he hold up well with my punches, but I thought he did a great job of firing back and not folding under the pressure that I bring, and the pressure and magnitude of that kind of fight."

Porter said Garcia doesn't tend to show that in-ring toughness outside of sport. "That might have also been why it caught me by surprise.

"[But if they don't] then it'll definitely catch them by surprise, too."

Work-rate could determine the fight's winner, according to Porter

"It takes a few rounds to get started and his slow work-rate pace, if he loses, that could be a component on the scorecards. Just him not being consistent offensively.

"If he beats Errol, it will be because he hurt him, so for Errol it's a case of being defensively responsible and not being caught with any of those surprise punches that Danny Garcia has, because he's a very good counter-puncher."

Porter added: "I'm picking Errol Spence Jr. to win by decision, but I will officially pick the winner after the first round. I think we'll see the winner in that first round.

"We'll be able to see who Errol Spence Jr. is, which, more than anything, is the biggest component to this fight.

"Then I think also, we'll be able to see where Danny Garcia is in terms of his readiness and desire to win the fight."

The Premier Boxing Champions event will be broadcast on December 5 on Fox Sports pay-per-view in the US.