MADRID — It is not just the jerseys, the deep blue and the blood red, that make the players instantly recognizable as representatives of Barcelona’s fabled youth system.

It is the way they play, too, how they have been imbued with the soccer club’s style. It shows in the results this season: 30 games played, 30 games won, a scarcely probable 329 goals scored in a league largely consisting of neighborhood teams from Catalonia. 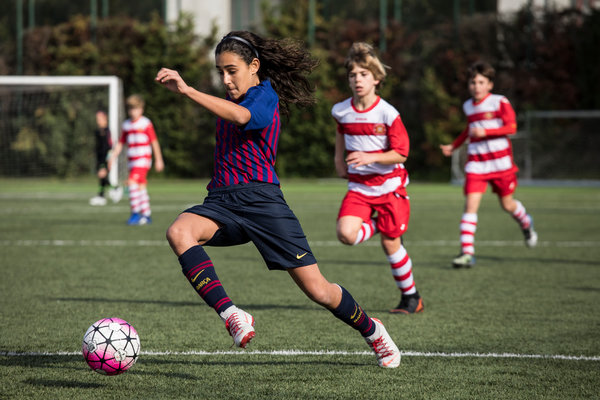 There is only one aspect in which this team can be marked as different from all the other Barcelona sides brimming with hopefuls who wear that famous jersey, who dream of following in the footsteps of Xavi Hernández and Gerard Piqué and Andrés Iniesta and all the rest. It is that its roster is made up of girls, and they play in, and dominate, a league populated by boys.

This season, for the first time, Barcelona entered its under-12 and under-14 girls’ teams in local boys’ leagues. It was not the first Spanish team to do so: The choice has formed part of Atlético Madrid’s youth policy for some time, and Athletic Bilbao has also recently adopted the idea.

But Barcelona has been so impressed by the results that starting next season, it will do the same with its under-10 girls’ team. The motivation, of course, is the improvement of the players: The club believes that exposure to the different environment accelerates their progress.

“When these girls play in boys’ leagues, they are pushed harder in their games,” said Maria Teixidor, the board member at Barcelona responsible for women’s soccer, among myriad other things. “It really makes them perform better.”

If anything, the results this season suggest the girls met the challenge too easily. Barcelona won the league at the under-12 level — Aleví, as it is known in Catalonia — by 14 points, winning all of its games. Celia Segura, the team’s star striker, scored 121 goals, more than twice as many as her nearest challenger.

That success might, perhaps, have brought a degree of resentment from vanquished opponents, but Teixidor was adamant that was not the case. Spanish soccer rules state that until players reach the under-16 age group, genders are allowed to mix — and even after that point, Teixidor said, the club may now try at least to hold shared training sessions for boys’ and girls’ teams — and so no clubs objected to the idea.

Nor has there been any acrimony from beaten boys. “There has been another effect,” Teixidor said. “For the boys, it helps to normalize girls playing soccer at the same level as them. For the girls, it empowers them that there is no reason that they cannot play at the same level.”

Barcelona’s girls’ players have not always received that same sort of support as they tried to pursue their passion: One recalled being told that she was not allowed to play with boys while at school, with a teacher explaining that soccer was not a suitable pastime for a girl.

Like Atlético Madrid and Athletic Bilbao, Barcelona is investing more heavily in women’s soccer, trying to apply the same methods to developing women’s players that have brought it such success in developing men’s players. Giving girls the chance to face off against boys is just one aspect of that; long gone, too, are the days of women’s teams having to train late at night, so as not to interrupt the schedule of the men’s teams.

“It is part of a global call from women for equal conditions in every aspect of life,” Teixidor said. “It is our responsibility as a club and as a social institution to add what we can to that. And it is working: It is not exactly a surprise that when you give women the same conditions as men to succeed, they do perform better.”

Rory Smith is the chief soccer correspondent, based in Manchester, England. He covers all aspects of European soccer and has reported from three World Cups, the Olympics, and numerous European tournaments. @RorySmith