Sometime around midmorning, the text messages ramp up. They come from the same people on the same day each year, expressing the same tactful blend of compassion and heartbreak. Their arrival is as reliable as the spring harvest in Payne County, Okla.

“Thinking of you today.”

Rarely do the messages directly mention the occasion they honor. But their existence is a reminder all the same. So I take the first one as a cue to send out my own messages, always to the same group of people.

On Jan. 27, 2001, the Oklahoma State men’s basketball team lost at Colorado and was heading home amid a subpar season. The Cowboys were a yearly fixture in the N.C.A.A. tournament and had made the round of 8 the previous season. Eddie Sutton was having a coaching run that would later land him in the Basketball Hall of Fame. Before the 2000-1 campaign, Oklahoma State had renovated its basketball arena to double its capacity. Yet with a 13-7 record, it was clear that this team would struggle just to make it into the tournament again. With that backdrop, the team loaded into three planes for a short flight home from Jefferson County Airport.

A few hours later, two of the planes touched down about 650 miles away in Stillwater, Okla.

The third did not. It crashed shortly after takeoff in rural Colorado, killing all 10 people aboard. Two players, Daniel Lawson and Nate Fleming, died, along with three basketball staff members, the team’s radio broadcaster, a radio engineer, the pilot, the co-pilot and Will Hancock, the team’s media relations director.

Eleven days earlier, I had turned 22. I was the sports editor and lead basketball writer for the campus newspaper at O.S.U., The Daily O’Collegian. I had never experienced tragedy on any scale before. Despite growing up 90 miles from Oklahoma City, where the bombing of a federal building in 1995 killed 168 people and a tornado in 1999 killed 36, tragedies, to me, played out on television, in newspapers and in early-days internet. For me, journalism was fun. Writing came easily. The sports, naturally, were the best part.

Then all that went away. The crash devastated the community. The O’Collegian, and my job in particular, had the task of informing and comforting a crestfallen university: Plan the coverage. Write about the tragedy. Interview people and ask them to relive that night. Attend funerals and memorials. Go back to the office. Edit someone else’s stories. Pick photos. Design the paper. Do it again. Now again. 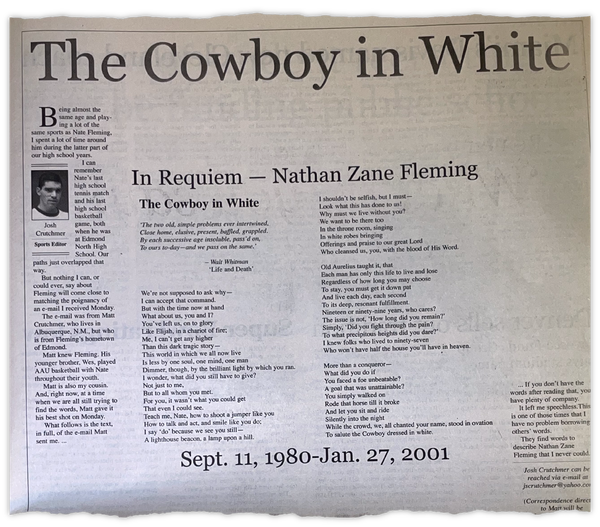 Suddenly, I was writing obituaries and editing tributes for people I had cracked jokes with or asked for a few minutes to chat with the week before. I had a class with Lawson. Fleming was childhood friends with one of my cousins. Hancock worked for the team, yet kept me from being overwhelmed at times as a student journalist despite a handful of less-than-favorable articles I had reported about his players.

For the next edition of the newspaper, released two days after the crash, I replaced the sports page with a black box, and wrote: “Today, our tears will fall on this page. Sports can, and will, wait.”

Three days after the crash, when Sutton spoke at a news conference for the first time, I was in the front row, noting his suddenly weathered face and worn eyes. “I’ve tried to advocate to the team that this is a long process,” he said. “One way to do it is to think of the good times we had with the people who are gone.”

I had friends to turn to. College newspapers have reasonably robust staffs, and ours was tight-knit. What I did not have was any self-care playbook or even sound advice. Journalism school emphasizes objectivity and tenacity, so I tried to stay objective and tenacious. The pain I was covering belonged to somebody else. It could not have been mine.

Almost robotically, I powered through the coverage, tamping down every feeling of grief or heartache as it arose. When I left college and became a professional journalist, I recused myself from coverage of the crash, eschewing memorials, anniversaries or reflective essays. When I graduated in May 2001, I boxed up all my coverage — all the writing, editing, designing and planning — and did not open the box until 2017.

I knew there was something inherently unhealthy about ignoring my feelings. Grief and heartache are as common for reporters as striving for objectivity.

A few months after graduation, I was living in Oklahoma City when the Sept. 11 attacks happened, and I drove the 60 miles to Stillwater to support the student journalists as they put out that day’s newspaper. Today, I watch my colleagues cover death, a pandemic and unrest, sometimes while facing personal risk, and I hope I am doing something — anything — to help them process their own experiences.

The joy in sports also never left, although the experience gave me new perspectives. It is just a game, but to some people — including many Oklahoma State fans — that game is all that matters.

Its programs have endured more tragedy in recent years. In 2011, another plane crash — this one killing the head women’s basketball coach, Kurt Budke, and his assistant Miranda Serna — brought grief new and old to the university. In 2015, a driver accidentally veered into a crowd at the football homecoming parade, killing four people.

Successful sports seasons at O.S.U. take on added weight amid these tragedies. The idea of a championship itself becomes part of a never-ending healing process. Monuments to each incident dot the campus. Even at a time when more people have died locally after catching the coronavirus, the phrases “Remember the 10” and “Remember the Four” are intertwined with the university.

I know this on my own.

But it took those yearly text messages to crystallize the grief and heartache I denied myself in the name of college journalism. I don’t know exactly when texts like “thinking of you today” became a part of my Jan. 27 routine. But once I found myself waiting on them every year, I realized I was waiting on the compassion and concern of others.

Maybe, I thought, I could show a little for myself.

When I opened that box of newspapers in 2017, I found the tears I should have found in 2001. More recently, I properly reached out to others more directly affected by the tragedy — people I should have hugged in the moment but talked myself into “covering” instead — and found a world of new friends.

And finally, today, I am “unrecusing” the journalist in me from the tragedy. Twenty years ago, I tried to put it in context for a community that needed it. For the next 20, I hope I can do it for others, including journalists, who may be inclined to cast aside the impact of this or any other tragedy they experience.

Today, one more anniversary will pass. Grief and heartache will rise and fall, bringing the lessons of journalism, community and sport I carried for two decades since that night. I will send those text messages anew.

The people on the other end will know I am thinking of them today.

Josh Crutchmer is the planning editor for The New York Times. As a student at Oklahoma State University, he was the sports editor of the campus newspaper, The Daily O’Collegian, in 2000-1.