Australia’s Diamonds want their world title back – and have laid down an emphatic marker with a Quad Series triumph at the venue where they intend to reassert their global netball supremacy in August.

One of the world’s most successful sports teams added another bauble to their groaning trophy cabinet on Wednesday, successfully defending their four-team crown without a single loss and beating their fiercest rivals New Zealand 56-50 in the final in Cape Town. 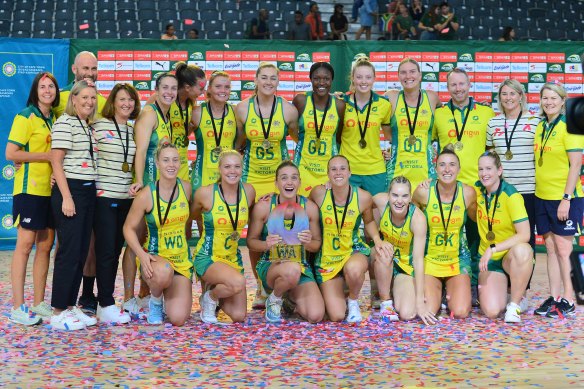 Liz Watson and the Diamonds celebrate with the trophy.Credit:Getty Images

Even an umpire blunder in the final quarter when both officiators chalked off a New Zealand goal because they didn’t see it failed to disguise how dominant the Diamonds were in winning the Quad Series against New Zealand, England and South Africa for the seventh time in eight episodes.

In the final quarter with Diamonds having stretched the lead to seven, Australia’s superb goal defence Courtney Bruce and brilliant 20-year-old opposition shooter Grace Nweke, who enjoyed a fierce battle, both ended up tumbling over in a heap as they jostled while the New Zealander’s teammate was taking a shot at goal.

The umpires were so engrossed in trying to sort out who was at fault in the incident that they both missed that Ameliaranne Ekenasio had scored while Nweke was falling.

They ruled out the goal, and had the game restarted by a ball toss-up – which was, of course, no help at all to an irritated New Zealand side – but, in truth, the blunder made no difference to Australia sealing the title for the fifth straight time.

Fox Sports commentators were in disbelief as they called the action.

“How is it you have a situation where neither umpire sees whether or not the goal is scored? It’s extraordinary,” Jenny Woods said.

“This is nuts, we have proof of the goal being scored.”

The umpires do not have access to video replays.

By defeating the Kiwi world champs for a fourth straight time and completing an unbeaten week’s work over their four matches, coach Stacey Marinkovich’s side demonstrated why they’ll take all the beating at the World Cup at the same Cape Town International Convention Centre in August.

“Really happy with that one. We built something in this second match against the Silver Ferns. It’s a really great confidence builder for us – we put out a really great last quarter that we’ve been wanting to do this whole series,” said Diamonds captain Liz Watson.

The Ferns’ shock World Cup triumph in Liverpool in 2019 left the Australians smarting – and they’ve been taking every opportunity since to reassert their supremacy, with another Quad crown now added to their Constellation Cup and Commonwealth Games wins.

Once again, just as she had been in the first win over the New Zealanders, the star of the Australian show was Steph Wood, who, with her distance shots, superb movement and link-up play with attacking partner Cara Koenen, who scored 33 goals from 34 attempts, was voted player of the match. 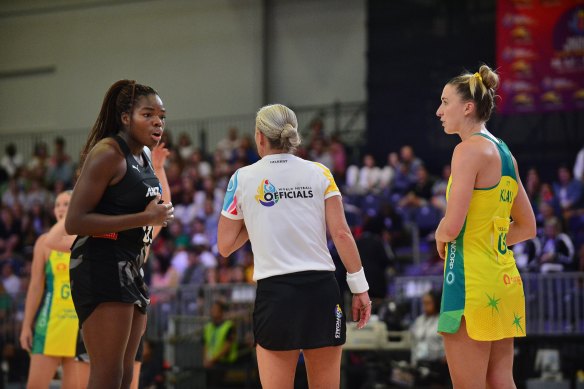 “It was a really tough match, a real quality one – and every time we come up against the Ferns, they’re getting better and better,” said Wood.

“We train against our own defenders, who definitely give us a tough time – and we want to make training harder than games, so that when you come to the match against tough defenders, you know what to do.”

The Australians definitely won the physical battle of attrition, despite again having to rouse themselves after an underwhelming start as they went into the first break four goals down at 19-15.

But gradually putting suffocating pressure on the Silver Ferns before and after the break, the New Zealanders coughed up seven turnovers in a decisive third quarter in which an early 10-3 run enabled the Diamonds to take control by four goals.

News, results and expert analysis from the weekend of sport sent every Monday. Sign up for our Sport newsletter.