From Gazza running the show to Wayne Rooney arriving on the scene as David Beckham struck a trademark free-kick – before seeing red nine years on… Part III of England’s journey to 1,000 matches

England will play their 1,000th international when they host Montenegro in a Euro 2020 qualifier at Wembley on Thursday.

There are 1,244 players who have worn the Three Lions shirt while 2,188 goals have been scored since the first international finished goalless in 1872. So far, 568 matches have been won — including one World Cup final — and 189 lost.

Here, Sportsmail highlights three landmark games on the road to a thousand in the third of our three-part series… 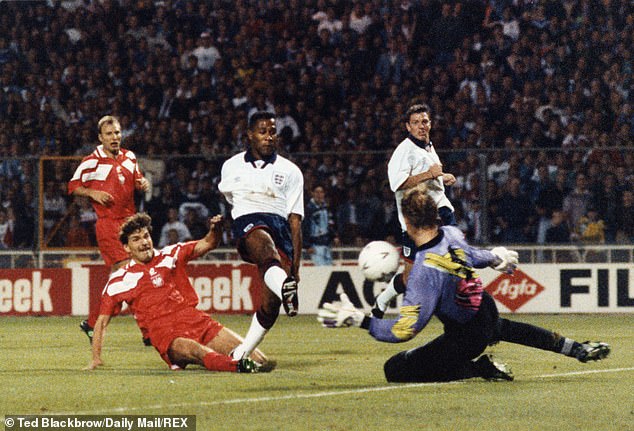 We were under big pressure coming into this game. We’d lost the previous qualifier in Norway and we were in a tough group.

There were some unsavoury things written about Graham Taylor and some of the players around that time.

Graham was filming the fly-on-the-wall documentary. We’d been made aware he was doing it and the crew were around, although it wasn’t until later that I realised he had worn the mic all the time, even on the bench.

We came out quick against Poland, on the front foot and I scored my goal after five minutes. That settled us down. I managed to get on to a pass over the top, controlled it and curled it past the keeper with my right foot.

Then Gazza took over, he was on fire in that game, dictating everything in midfield. He scored the second. I flicked one on and he ran on to it and finished it. That was 2-0 and the third was a free-kick from Stuart Pearce. 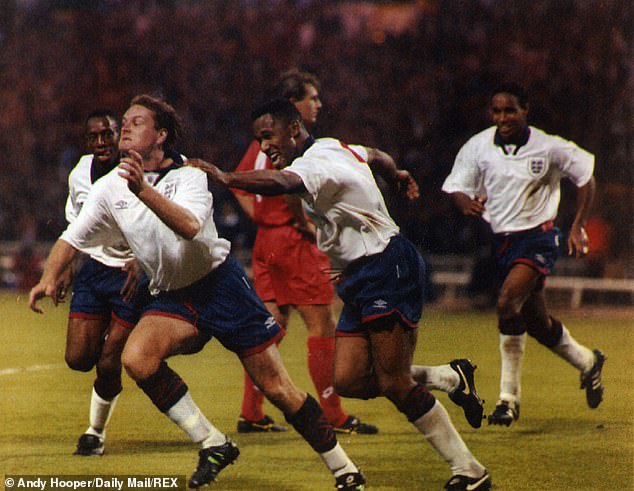 It was a big win, an important result for us and a big relief. It kept us in the competition. But Gazza was booked for a tackle which meant he would have to sit out the next game in Holland through suspension.

I missed the game with a back problem which had been troubling me for some time. England had wanted to give me an epidural to numb the pain but Gerry Francis, my manager at QPR, said it wasn’t happening. He’d had something similar and ended up doing himself more damage. We lost in Holland and didn’t make it to the World Cup. 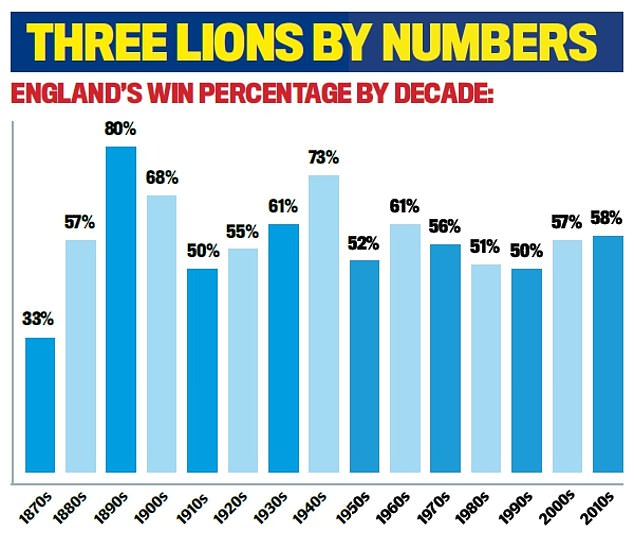 The first thing that springs to Emile Heskey’s mind when asked for his memories of England’s win in Liechtenstein is not the match, not even his assist for Michael Owen’s opening goal, but of the young boy who came on to replace him.

There were just 10 minutes left of the Euro 2004 qualifier when Heskey’s number went up and he made way for a 17-year-old Wayne Rooney who came on for only his second appearance. Rooney had made his debut the previous month, coming on at half-time in a shock 3-1 home friendly defeat by Australia, as he became the then youngest player to represent England at 17 years and 111 days old.

In Vaduz, Sven Goran Eriksson imparted a few words of advice to the wide-eyed youngster after a lengthy touchline chat from assistant Brian Kidd. England were already 2-0 up through Owen’s header from Heskey’s cross — as their natural partnership continued to bloom — and a trademark David Beckham free-kick. 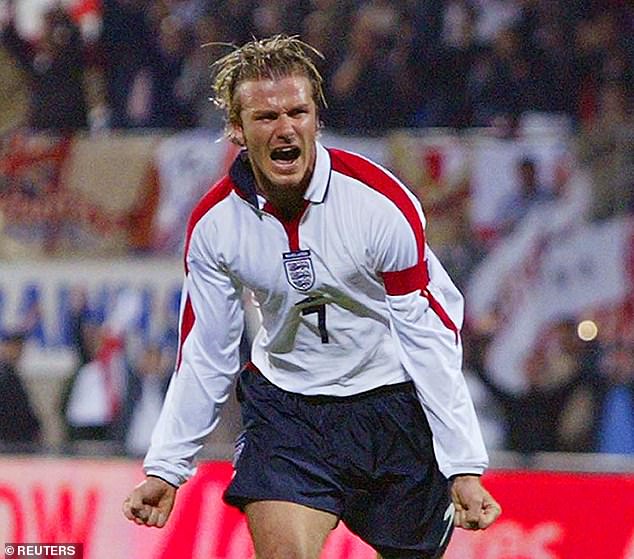 Rooney had scored three Premier League goals for Everton by then — and had been sent off too. Who would have known this boy from Merseyside would go on to become his country’s most prolific goalscorer?

‘Everyone knew what he was about,’ said Heskey. ‘You get those players every now and again. You just know. You know they will kick on and do wonderful things.

‘I had played with Michael Owen so I knew what it was like to see someone special at a young age.’

You can perhaps forgive Heskey for not remembering too much about the game. It was a nondescript qualifier in front of little more than 3,500 spectators and a marquee in Vaduz. What is impossible to forget, though, is the sense of unfulfilled potential of the England team at that time, the Golden Generation, as it was called.

‘We never called ourselves that,’ Heskey is quick to emphasise. ‘It was pushed on to us. It is always a boost to the confidence but then if you don’t get it right it was how you deal with that pressure.’ 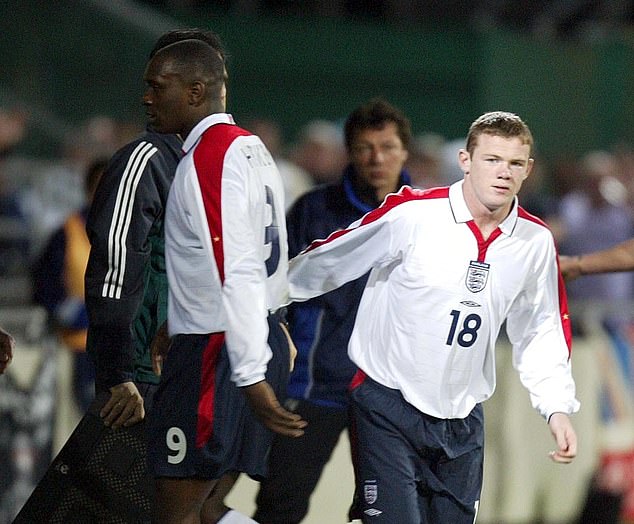 They would qualify for the Euros the following year but were knocked out in the quarter-finals (losing on penalties to Portugal), just as they did at the World Cup in 2006. It is argued club division trumped international unity. Gareth Southgate — who also started against Liechtenstein — has tried to quell this in his time in charge and Heskey says he did the same as a player.

‘You were fighting tooth and nail to win the league and stuff like that and then having to go into this mentality of being all together with England, it was a difficult one.

‘If you and me were at the same club, we would sit next to each other. You would have four or five lads from United, then Liverpool, then Arsenal. I was at Liverpool. I remember coming back when I was with Wigan and I sat on my own! Gareth was great when I was a young lad. He would make sure you were all right. He was one of the best when you needed people to look after you.’ 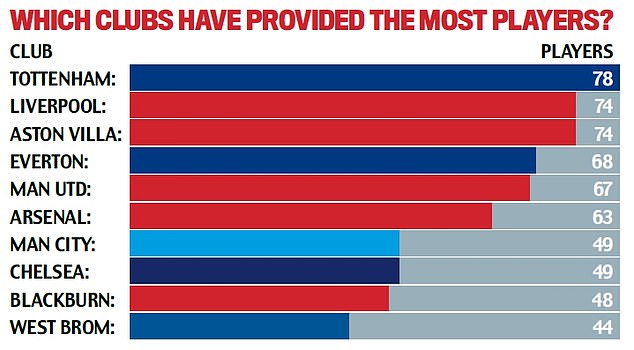 My first impression was the state of the stadium. We turned up to train on the pitch the day before the game and I couldn’t believe how broken up and dilapidated it was. It wasn’t very big and it seemed to be half falling down. It was completely different to anything we were used to. You could tell it was going to be really hostile. And it was.

They made it really difficult for us but we knew we were better than them. We knew we’d have large chunks of the game and said, ‘Let’s get out there, get off to a good start and see where it takes us’, and we came out flying.

Ashley Young scored early and set me up for the second. I didn’t know at the time but it was the last goal I would score for England. I only won two more caps.

We were 2-0 up after half an hour, thinking we were going to pepper them, but we didn’t capitalise. They had Mirko Vucinic from Juventus up front and from the other end of the pitch I could see he was starting to cause us more problems. He was very talented and had a good touch. We needed another goal but didn’t really have another chance and they pulled one back just before half-time.

I was substituted by the time Wayne Rooney was sent off. I was on the bench and didn’t see it but Wayne kicked out at someone. 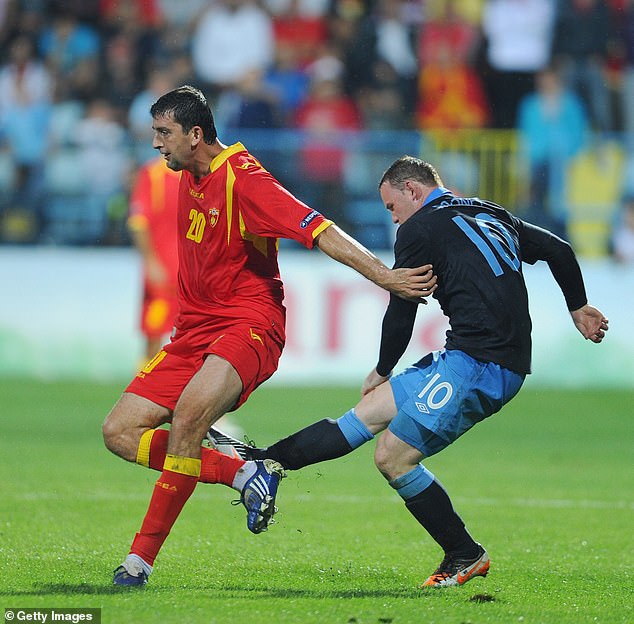 We were all thinking, ‘Oh no’. We held out until the last few seconds but they equalised in stoppage time and we had to walk off at the end past the England fans. They were fuming.

We didn’t mean to concede but it was one of those things. We didn’t lose and managed to qualify for Euro 2012, but it was a completely different atmosphere to the way it is now where the fans seem to be happy and bubbly regardless of the result. Back then they were savage.

Not too much was said in the dressing room. There was no big hurrah. We knew we should have won the game but we had won the group and qualified so let’s move on. That was it.

This was my fourth goal from five games for England. I was 27, playing really well for Aston Villa and it all seemed to be coming together. It felt like this was my time. I was ready to go. Then injury struck against Wigan. I nicked the ball from the defender, jumped to avoid the tackle, came down and snapped all the ligaments in my ankle.

Roy Hodgson had replaced Fabio in May 2012 and we had a conversation after I was injured. Roy said that if I got back I’d have a chance at Euro 2012.

At the end of the season I was fit but hadn’t played a game — I hadn’t even trained with the boys. It wouldn’t have been right to go there with no games. I would have loved to have gone to a major championship with England but it just wasn’t meant to be.

To play for your country is absolutely the greatest honour. I feel the amount of goals I scored and my performances warranted a lot more caps than I won, but I still look back with fond memories. 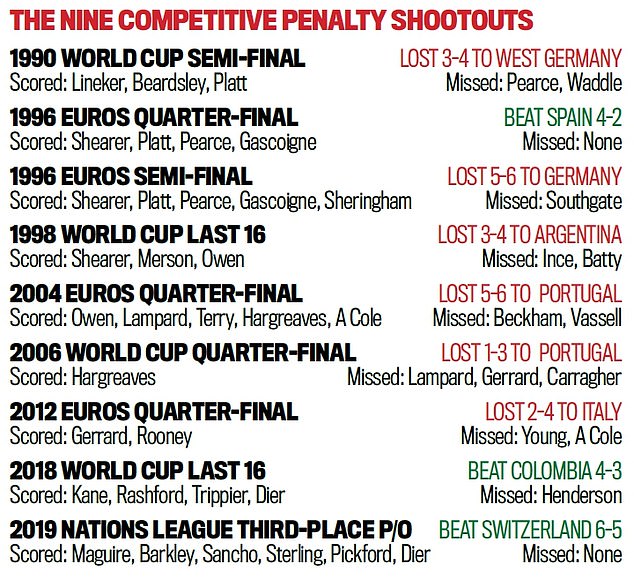 62 – Emlyn Hug hes won 62 caps for England without ever playing at a major tournament — the most of any player not to play at a World Cup or European Championship.

Compiled by Will Jeanes