Liverpool have reportedly moved ahead of Manchester City in the race for Napoli’s Senegal centre-back Kalidou Koulibaly, 29, by offering Croatia defender Dejan Lovren, 30, as part of a transfer. (Tuttosport via Sun)

Chelsea have been given a transfer boost by Ajax with manager Erik ten Hag suggesting that 27-year-old Argentina defender Nicolas Tagliafico and Cameroon goalkeeper Andre Onana, 24, could leave the club this summer while 23-year-old Netherlands midfielder Donny van de Beek, a Manchester United target, could also be on his way out. (Express)

Manchester City are set to sign Juventus’ Spanish forward Pablo Moreno, 18, in a swap deal which will see Portuguese winger Felix Correia, 19, move in the opposite direction. (Goal)

Inter Milan are considering selling Slovakia defender Milan Skriniar, 25, this summer with Manchester City among those interested. City’s Argentina striker Sergio Aguero, 32, could be part of a possible deal. (Calciomercato – in Italian)

Benfica are reportedly interested in appointing former Tottenham Hotspur boss Mauricio Pochettino as their new manager. The 48-year-old has been out of work since last November. (Record – in Portuguese)

Ivory Coast and former Chelsea forward Salomon Kalou, 34, who is out of contract at Hertha Berlin at the end of the season, is close to agreeing a free transfer to Brazilian side Botafogo. (Yahoo Sports)

Torino are ready to sell Nigerian defender Ola Aina with Everton and West Ham among those interested in the 23-year-old. (Inside Futbol) 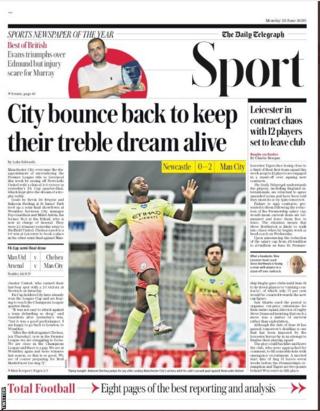