The captain of the German women’s field hockey team will be allowed to wear a rainbow-coloured armband and socks at the Tokyo Olympics.

Nike Lorenz has been given the go-ahead by the International Olympic Committee to wear the LGBTQ Pride colours during this year’s Games as a “symbol of sexual diversity,” the German Olympic Committee announced on Thursday evening in a tweet. 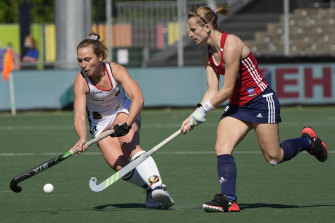 Germany’s Nike Lorenz, left, and England’s Elena Rayer vie for the ball during a match against England at the EuroHockey Championships 2021 in Amstelveen, Netherlands.Credit:AP

The 24-year-old hockey star, who won a bronze medal at the Rio Games, has previously worn rainbow-coloured armbands in other games.

However, because of IOC’s Rule 50 — which states that “no kind of demonstration or political, religious or racial propaganda is permitted in any Olympic sites, venues or other areas” — Lorenz was seeking clarity on whether she would be able to do the same in Tokyo, The Hockey Paper reported on Monday.

“We are pleased that we have found a way together that enables the hockey team to make a socio-political statement,” Hormann said in a statement.

Lorenz will wear her rainbow armband and socks in her team’s opening match against defending champions Britain on Sunday.

At the Rio Olympics, Great Britain won its first gold medal in the sport against the Netherlands 2–0 on a penalty shootout after a 3–3 draw.