NASCAR driver Joey Logano discusses what it’s like to race without any fans in the stands.

Martin Truex Jr. used a trip to NASCAR’s shortest track to end a lengthy losing streak on the day the stock car series at long last banned the Confederate flag.

Truex cruised down the stretch and won his first NASCAR Cup race of the season on Wednesday night in the first race under the lights at Martinsville Speedway.

Truex, the 2017 Cup champion, has been one of NASCAR’s biggest winners over the last three years, but failed to find victory lane for Joe Gibbs Racing over the first 10 races of this season. He won 19 times from 2017-2019.

“I knew we were going to get one soon,” Truex said. “Hopefully we can get on a roll.”

Tick tock. The time ran out on the losing streak.

Truex won the Martinsville grandfather clock on the paperclip-shaped track at just 0.526 miles. He won for the first time with new crew chief James Small.

“It’s huge for him and his confidence and for the way people look at him,” Truex said. “I think it’s huge. I knew all along that he was capable, I know he’s going to be an amazing crew chief for a long time to come.”

Ryan Blaney, Brad Keselowski, who has two wins this season, and Joey Logano made it a 2-3-4 finish for Team Penske.

The race started shortly after NASCAR said the Confederate flag would be be prohibited from all NASCAR events and properties.

The issue was pushed to the fore this week by Bubba Wallace, NASCAR’s lone black driver and an Alabama native who called for the banishment of the Confederate flag and said there was “no place” for it in the sport. Wallace drove the Richard Petty Motorsports’ No. 43 Chevrolet with a #BlackLivesMatter paint scheme. Wallace, wearing an American flag mask, clapped his hands when asked about the decision before the start of the race.

“It’s been a stressful couple of weeks,” Wallace said on FS1. “This is no doubt the biggest race of my career tonight. I’m excited about tonight. There’s a lot of emotions on the race track.”

Wallace wore a black “I Can’t Breathe” T-shirt but did not kneel during the national anthem. His Chevy had “Compassion, Love, Understanding” emblazoned on the hood. He finished 11th at Martinsville. 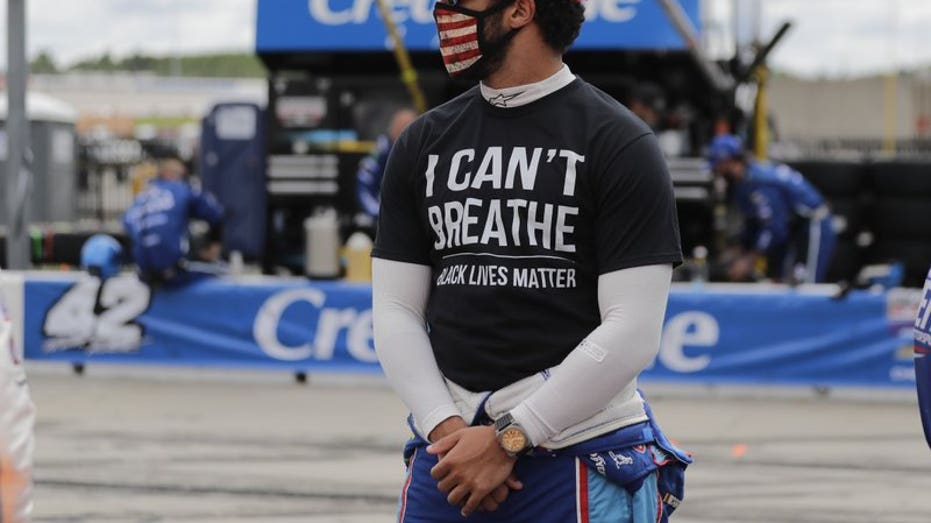 ’Our Black Lives Matter Chevrolet — that’s so good to say, right — was so good on the long runs,” Wallace said.

The 26-year-old Wallace, who finished second in the 2018 Daytona 500, also had a dose of newfound fame. Already outspoken on social causes in NASCAR, Wallace denounced the flag and his message spread throughout sports. Los Angeles Lakers star LeBron James tweeted a “BIG S/O” to Wallace and retired NFL star Deion Sanders tweeted he was proud NASCAR “recognized the sensitivity of our country while confronting the racial injustices.”

Wallace even made some new NASCAR fans — for a night, at least — out of other athletes. New Orleans Saints running back Alvin Kamara replied to NASCAR’s statement with a tweet asking “when the next race??” with a popcorn emoji. He followed along on social media, as did Carolina Panthers safety Tre Boston. Boston tweeted questions about the race and seemed to enjoy the action at Martinsville: “Do y’all be pinned to the TV. I’m watching the standing more than the drivers I feel. Is this ok? Am I doing this right? Do y’all flip channels?”

Former NFL safety Bernard Pollard Jr. joined in on the social media action and had a question on cautions answered on the FS1 broadcast.

But NASCAR’s decision angered a contingent of flag loyalists, who stewed on social media. NASCAR helmet artist Jason Beam, who paints designs for some of the sports biggest stars, was among the loudest critics. He unleashed a string of tweets blasting the move, writing “You can’t erase history by picking and choosing what parts you want to keep and don’t won’t to keep.”

Oh well, Reese Witherspoon gave the ruling a high-five emoji on Twitter, and that alone might be enough to outweigh the haters.

Martinsville capped a stretch of seven straight Cup races since it resumed without fans at the track. That streak ends Sunday when 1,000 Florida service members, representing the Homestead Air Reserve Base and U.S. Southern Command in Doral, are allowed to attend the Cup race at Homestead-Miami Speedway as honorary guests and view the race from the grandstands. The following week at Talladega Superspeedway, up to 5,000 fans will be allowed to attend the race. NASCAR says all fans will be screened before entering, required to wear face coverings, mandated to social distance at six feet, and will not have access to the infield.

“I want to say hi to all the fans at home, we definitely miss you,” Truex said. “This just doesn’t feel right, but exciting to win for sure.”

Austin Dillon, the 2018 Daytona 500 champion, was helped from the car because of overheating after the crush panels in his No. 3 Chevrolet were damaged earlier in the race. Dillon’s wife is expecting their first child any day now.

“I don’t know if I got dizzy or what,” Dillon said. “I just pulled in, had to stop, and thank all the medical staff that got me back.”