There is no denying the butterflies will be in the stomach for a third time when that first bell rings for Tyson Fury’s trilogy fight against Deontay Wilder in the early hours of Sunday morning.

The sleep deprivation will inevitably ruin British fight fans’ Sundays but that Las Vegas time-related anger will subside when the two heavyweights finally get it on one last time, putting to bed a three-year feud.

But has it all been worth it?

In a time frame three months shorter than that, Wladimir Klitschko alone won and defended his belts eight times between April 2006 and June 2009. 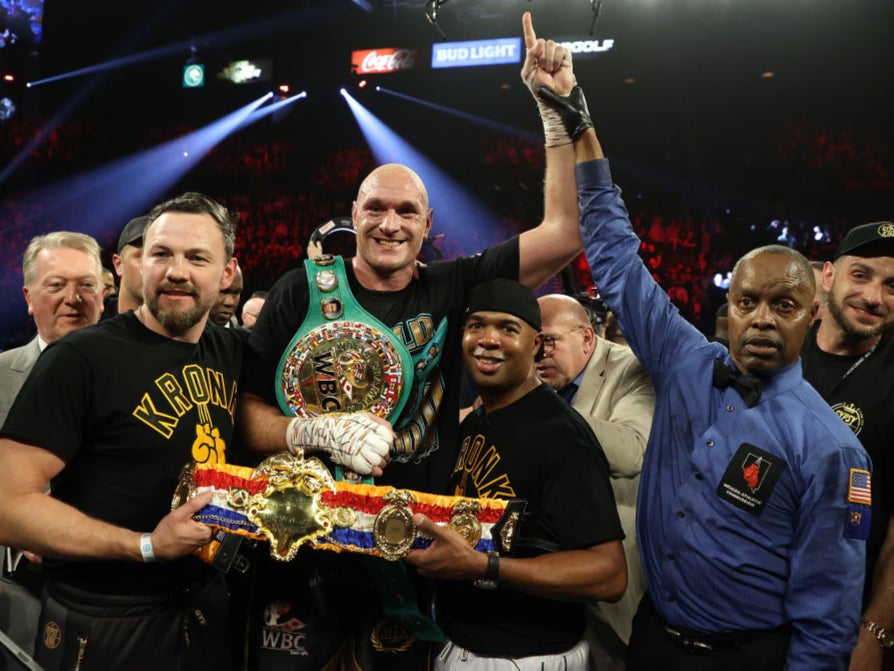 Fury’s win over Klitschko six years ago ended the Ukrainian’s decade-long stranglehold on the division. The landmark result fragmented the belts and appeared to free up opportunities for the new generation.

Instead, this period of stagnation exacerbated by rematch clauses has left fighters paralysed and fans frustrated.

The dragged out rivalry between Fury and Wilder has tripped and faltered ever since their first bout in December 2018 was declared a draw. It was a fight almost everybody felt the Briton won, with Fury even alleging that members of Wilder’s team conceded defeat in the ring before the result was read out.

The shared spoils led Wilder to retain his belt and subsequently saw Fury bin off an immediate rematch, instead deciding to flatten the ridiculously overmatched Tom Schwartz and then beat Otto Wallin in a fight only made interesting by a cut.

Meanwhile, Wilder blitzed Breazeale inside one round – a man Joshua had already stopped three years previous – before engaging in an alternate rematch against Ortiz, who he had knocked out in ten rounds 18 months earlier. The Bronze Bomber predictably finished the faded Cuban even quicker.

Elsewhere in the US, Joshua was stunned by Ruiz before reclaiming his titles with a unanimous decision victory in Saudi Arabia six months later.

The IBF, WBA and WBO champion would then endure 12 months out of the ring as the coronavirus pandemic took hold and a mandatory defence against Kubrat Pulev was continually delayed.

Fury beat Wilder in their long-awaited second bout – a seven-round beatdown after which very few were interested in seeing them meet again.

A rematch clause would see the remainder of the year escape them as the pandemic sidelined a third fight. Fury eventually had enough and attempted to cast Wilder aside for good.

That brought us 2021 when boxing fans across the world were forced to sit back and watch Joshua and Fury’s respective camps negotiate an undisputed clash for months on end.

In the end, boxing did what it always does – it let the people down. The sport shot itself in the foot as an arbitrator decided Wilder had the contractual right to a third fight and we were back to square one.

So here we are. The elongated, painful politics between Fury and Wilder has not been worth the 19 rounds we have seen from them so far. It has left two heavyweights in their prime unable to get in the ring for 20 months while the rest of the division sits on its hands.

Dillian Whyte, Joe Joyce, Filip Hrgovic, Tony Yoka, Michael Hunter, Zhilei Zhang. All these contenders – who offer a variety of interesting components to a heavyweight title fight – have been forced to sit by the wayside as they wait for the Fury-Wilder-Joshua merry-go-round to slowly grind to a halt.

Finally, this Fury-Wilder saga looks set to come to a definitive conclusion this weekend as there is no rematch clause for a fourth bout and Whyte has been ordered to take on the winner providing they cannot agree an undisputed fight with Usyk (who is contractually obligated to rematch Joshua).

But the end of this lopsided British-American rivalry is a bizarrely unprecedented one.

Unlike the Muhammad Ali-Ken Norton and Ali-Joe Frazier trilogies all three fights have been for a world heavyweight title. And unlike Floyd Patterson-Ingemar Johansson and Riddick Bowe-Evander Holyfield it is not 1-1 coming into the third – most would declare it 2-0 even if it isn’t on paper.

A trilogy fight almost always takes place as it is being called for by the fans because they are giddy to see a decider – an epic rubber match to put a rivalry to bed.

But that’s not what this represents. More than anything it has acted as a roadblock to both those who want to earn a world title shot and to the fight everyone wanted to see – Fury vs Joshua.

Now that all-British dust-up is dead in the water following Usyk’s win over Joshua last month – an outcome that despite its conclusiveness is still set to result in yet another heavyweight rematch.

Fury, Wilder and Joshua have been responsible for holding up the division in a much more overt way than Klitschko ever did. In fact, the only way Klitschko was preventing the evolution of the heavyweight landscape was due to him being so darn good. Aside from that, between 2002 and 2009 he was giving a different contender a chance every four to seven months.

There is unquestionably a place for serial rivalries in boxing – some would say it is the cornerstone of people’s interest in the sport. But you simply cannot get away from the fact that the snail-like speed of its development during this Fury-Joshua-Wilder era is inexcusable.

The reason the Klitschko era was dubbed ‘boring’ and this new generation ‘exciting’ – despite a decline in the frequency of big fights – comes more from the personalities and nationalities of those holding the belts and less from what has actually happened in the ring.

Ironically, another Ukrainian could put an end to this promising yet somewhat underwhelming era if Usyk is able to beat Joshua again.

And Fury can finally swat Wilder to one side and open himself up to newer, fresher challenges with a convincing win this weekend.

At one time or another we have all been captivated by the Fury-Wilder story. But let’s be honest, come Sunday morning, we’ll probably all be happy to bid it farewell.