ETHAN AMPADU cursed his luck on Tuesday as he was sent off for a perfectly clean tackle.

The Chelsea defender, 21, is on loan at Italian side Venezia for the season. 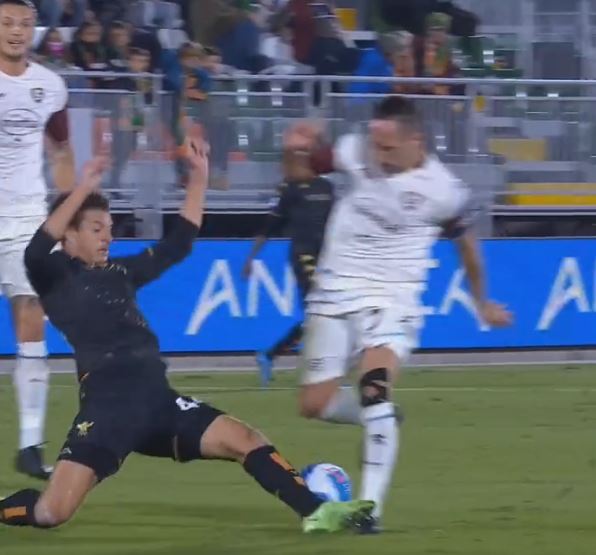 And Ampadu made his fourth Serie A appearance in Tuesday’s 2-1 home defeat to Franck Ribery’s Salernitana, coming on as a sub in the 60th minute.

The score was tied at 1-1 heading into the final 25 minutes when Ribery pounced onto a loose ball outside Venezia’s penalty area.

Alert to the situation, Ampadu pounced forward with a textbook tackle to stamp out the danger.

However, the referee saw otherwise as Ribery rolled around on the floor.

He immediately stopped play and ran over towards Ampadu before brandishing a red card.

The Wales international and his team-mates looked aghast at the decision.

And it came back to haunt Ampadu as Salernitana scored a winner in the 95th minute.

The result means the bottom-place club are now just one point behind Venezia.

And Chelsea fans were not happy with the decision to send off Ampadu when he’d been on the pitch for a few minutes.

Another wrote: “Terrible decision, wasn’t a red at all.”

One added: “Horrible decision from the ref, there is no way Ribery gets past him.”

Ampadu’s spell at Venezia is his third loan from Chelsea, with the versatile youngster also spending time at RB Leipzig and Sheffield United.

He has played just 12 times for the Blues, with his last appearance coming in the 2018/19 campaign.