The Spaniard was in inspired form for most of the first half, making a number of world class saves as Manchester City completely dominated. 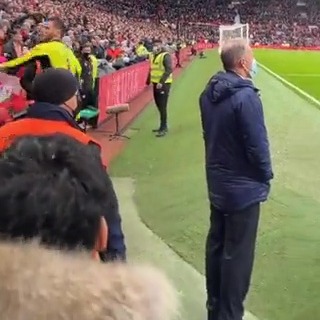 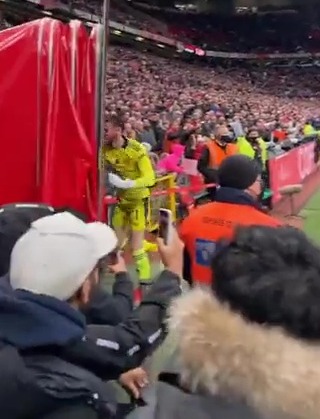 But on the stroke of half-time, with his team already 1-0 down after Eric Bailly fired into his own net, things took a terrible turn for De Gea.

Joao Cancelo swung a beautiful ball into the back post, and seemingly from too-tight an angle, Bernardo Silva toe-poked towards goal.

The ball hit De Gea and ended up in the back of the net.

De Gea clearly felt he should have done better, as he screamed to the high heavens.

Harry Maguire and, predominantly, Luke Shaw were also hugely culpable for the goal, failing to cut out the cross before Shaw lost sight of Silva and allowed him to ghost in to finish.

The half-time whistle blew not long after, with De Gea visibly fuming as he made his way into the dressing room.

The 30-year-old stopper swung a right hook at the tunnel with the fans in the stands just as upset with the team's performance.

He later tweeted that he was 'hurt' by the Old Trafford shambles.

And another BIG United fan was similarly as fuming at seeing the Red Devils meekly lay down for their big rivals.

Heavyweight champ Tyson Fury issued a warning to United after their lacklustre 2-0 defeat in the derby.

The Gypsy King, 33, is a diehard United fan and has been appalled by recent performances.

And he has taken it upon himself to call the squad out for their lack of hard work after they rolled over against Manchester City at Old Trafford.

In a video message on Twitter Fury said: "After today's defeat to City it is fair to say United are taking a worse beating than Deontay Wilder took in all his fights versus me.

"They're getting absolutely smashed out there and I think partly it's because the players, no disrespect to any of you, but it doesn't seem to me like you're digging deep to try and win these games.

"When I fought Wilder and I was on the floor – and any other man I've ever fought – I never ever believed I was going to lose the fight.

"I always believed I would come back and win, that's called a winner's mentality. And that's something in the last few games that you guys just have not had.

"I think me and Patrice Evra are going to come down to training give you some of that hard work that you need.

"See you all soon. And be prepared."