THIS is the hilarious moment Kalvin Phillips TACKLES ref Andre Marriner during Leeds’ defeat at Tottenham. 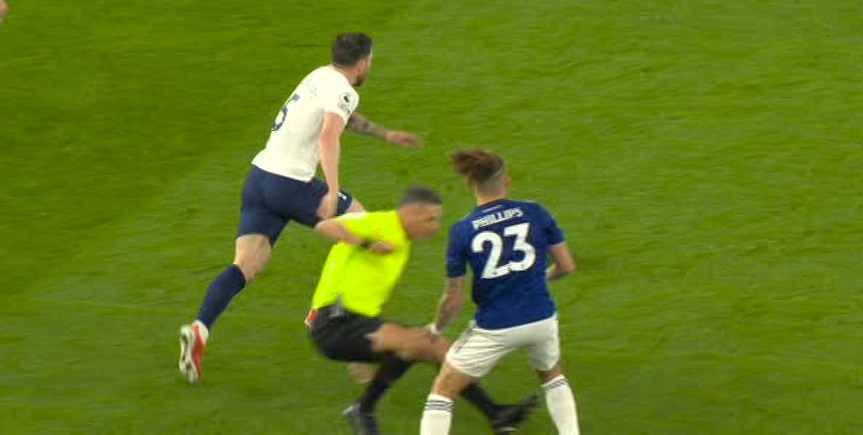 But Antonio Conte’s men battled back as goals from Pierre-Emile Hojbjerg and Sergio Reguilon secured a 2-1 victory, giving the Italian manager his first Premier League win since returning to England.

However, one of the main talking points from the game occurred in the first half with the scores still tied at 0-0.

A competitive first half saw Leeds dominate proceedings as they bamboozled Tottenham with their high press.

One such occasion saw Spurs attempt to play out from the back, with Japhet Tanganga passing forwards to midfield and eventual goalscorer Hojbjerg.

As the Dane swivelled to drive forward, Phillips came bursting towards him in a bid to win the ball.

However, referee Marriner was still catching up with the action as he stood motionless in the centre of the field.

Hojbjerg ran past on one side of the official.

And attempting to change direction with his sprint, Phillips ended up barging into Marriner, dragging him down to the floor.

As the crowd cheered, the ref rolled quickly on his back before leaping up and acting like nothing had happened.

The incident certainly had punters in stitches, with one tweeting: “To say that this has been the highlight of the game would be an understatement.”

Another wrote: “Should have pinned him. Mike Dean runs down the aisle and gives it a slow count. Whole stadium joining in the 3 count.”

One added: “Looked like a dive to me tbh.”