INDIANAPOLIS — In a normal year, when a player sinks a buzzer-beating shot in a N.C.A.A. tournament game, tens of thousands of fans erupt in celebration.

This year will prove to be a bit quieter, even if the venue is larger.

The men’s Final Four tournament will take place at Lucas Oil Stadium, a 70,000-seat arena home to the N.F.L.’s Indianapolis Colts. The crowd will be capped at 25 percent of capacity, with fans masked and seated in socially distanced pods of two, four or six. And the area reserved for each 29-member band will be empty.

“I understand the N.C.A.A’s decision,” Jake Tedeschi, 22, a senior tenor saxophone player in the No. 1 seed University of Illinois’s basketball pep band, said in an interview on Thursday. “But man, I wish I could be there. I’m hoping they’ll reconsider for the Final Four.”

But now, that dream is dashed, too.

After previously excluding bands only through the Elite Eight, an N.C.A.A. associate director of communications, Christopher Radford, said in an email on Friday that no bands would be allowed at any of the games in either the men’s or women’s N.C.A.A. basketball tournaments this year.

The decision, he said, was based on health and safety protocols developed with local health authorities, which “led to reductions in the size of official travel parties and limits on overall capacity in venues.”

The six Indiana venues that will host this year’s games, he said, will still play school fight songs and anthems. They will screen cheer video performances, and other band music will be in rotation.

But the honking tubas and energy-building improvisation of pep bands are what attracts many fans to the college game — they are the antithesis of the N.B.A.’s reliance on canned noise to punctuate big blocks and thunderous dunks. And bands have an even more crucial role in the N.C.A.A. tournament, Barry L. Houser, the director of the University of Illinois’s marching and athletic bands for the past 10 years, said.

“There’s nothing like live music to bring a stadium or arena alive,” he said in an interview on Thursday. “The playing of a fight song after a great play or going into a hot timeout after an amazing play for the team can really get the crowd riled up.”

Tedeschi, the University of Illinois band member, believes a band can “absolutely” change a game.

“We scream a lot,” he said. “And, especially late in the game, we do our best to distract the other team’s players.” 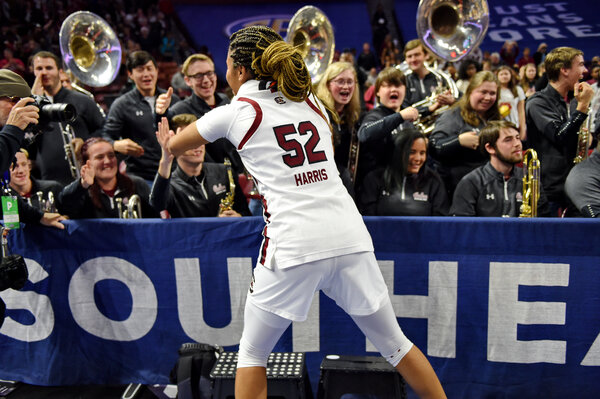 But pep band players aren’t just passionate about school fight songs or “Sweet Caroline” — they’re some of the biggest basketball fans in the arena and the spark that ignites most student sections.

“The chance to travel with the team and be their number-one supporter is a big reason I do athletic bands,” Tedeschi said. “It takes time away from my other coursework, especially when we’re traveling more, but it’s a sacrifice I’m willing to make. It’s near and dear to my heart.”

But seniors like Tedeschi will never get the chance to play at an N.C.A.A. tournament game —- a big part of why he joined the pep band his freshman year, he said. (The Illini did not make the men’s or women’s N.C.A.A. tournament his first two years, and the pandemic derailed last year’s games.)

He understands the N.C.A.A.’s decision to prohibit bands in the first two rounds, but thinks they could have been allowed for games later in the tournament. “The bracket is smaller, and fewer teams’ bands would show up,” he said. “It would mean less other fans, but for seniors, it’s the only chance we have. Mid-major teams don’t make it every year.”

Michael Martin, a 21-year-old senior at Ohio State who plays snare and bass drum in the pep band, has never been to any of the N.C.A.A. tournaments. And he’s now missed his chance.

“I prepared myself for it,” he said. “But I’m still really disappointed. I was looking forward to playing ‘Buckeye Swag’ for everyone.”

Houser, the University of Illinois band director, feels terrible for his seniors — especially in a year that the men's team is a No. 1 seed.

“The teams went through a lot of challenges, and now they’re doing so well,” he said. “I just wish our students had the opportunity to cheer them on in this situation.”

But having steeled themselves to the reality of a tournament without live music, band directors are looking forward to the coming year with optimism.

Christopher Hoch, who is in his fourth year as director of the Ohio State University marching and athletic bands, has been persevering with his athletic bands class, even absent opportunities to play at games.

“I felt it was important for students to continue to have the opportunity to play, even though they weren’t necessarily performing at events,” he said.

Now, Hoch is preparing his students for the halftime show they typically do at the spring football game. “We love being there to support the team and university,” he said. “And I’m hopeful we’ll be able to get back to doing that soon.”