The N.C.A.A. women’s basketball tournament has already shown the strength of its front-runners, as well as the fight of its underdogs. Players from across the country have put up career bests as they pushed their teams to the next level.

Here’s what to watch in the round of 16 games Saturday and Sunday:

The UConn vs. Iowa star-studded showdown 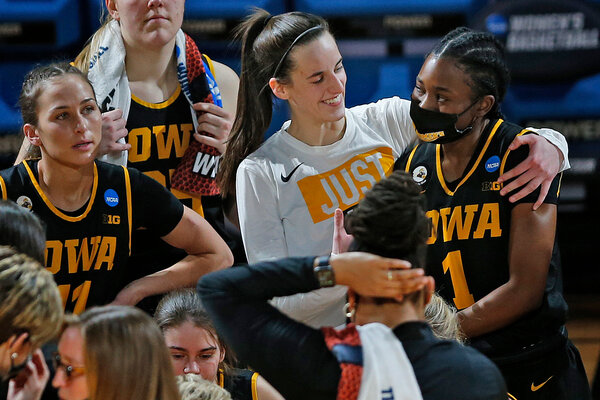 Connecticut has a tough road ahead that should make for great competition.

If the No. 1 seed Huskies want to get to their 13th consecutive Final Four, they’ll likely have to conquer two teams with very different — but equally lethal — strengths.

First, the matchup with No. 5 seed Iowa on Saturday (1 p.m., ABC) will test their defense. Iowa averages over 86 points per game, making theirs the second-highest scoring offense in the country. Their gaudy stats are made possible by the fearless freshman Caitlin Clark, Division I’s best scorer, and the efficient post play of 6-foot-3 junior Monika Czinano.

The anticipation of a face-off between Clark and UConn’s star freshman, Paige Bueckers, has made this a marquee matchup, but the Huskies will need to limit the scoring of all the Hawkeyes besides Clark and Czinano if they want a shot at moving on to the next round.

“It’s been a while since you’ve had two kids that have had this kind of an impact, both on their teams, and on the game nationally,” UConn coach Geno Auriemma told reporters Thursday of Clark and Bueckers. “Like it always is in these games, though, they’re just a part of it.”

If UConn wins, it could face Baylor (assuming Baylor gets past underdog Michigan on Saturday). Baylor has beaten UConn easily in their last two meetings — and happens to be the reigning champions. Baylor has been rolling early in the tournament and leads the nation in field goal percentage defense for the fourth straight year, allowing opponents to make just 31.7 percent of their shots. Four of Baylor’s starters average double-digit points, and the one who doesn’t — senior DiDi Richards — was the 2020 Naismith Defensive Player of the Year, and is a finalist for the award again this year.

In a different bracket, this matchup could easily be a Final Four or championship game; instead, though, both teams will likely be tested during what could be one of the most closely fought meetings of the tournament.

Only one No. 3 seed, Arizona, and one No. 4 seed, Indiana, made it to this year’s round of 16. The rest of the bracket is filled with teams that have already defied expectations facing off with the dominant top seeds, hoping for upsets that will leave their names etched into tournament lore.

No. 6 Oregon might be the best positioned of these teams, as the Ducks are slated to meet a second-seeded Louisville team that has played from behind for much of the tournament.

With the departure of Sabrina Ionescu, Satou Sabally and Ruthy Hebard, Oregon was meant to spend the 2020-2021 season rebuilding — not making it to its fourth consecutive round of 16. But the Ducks have so far shown more depth than anticipated, even without freshman guard Te-Hina Paopao, who is missing the tournament with a foot injury. Senior Erin Boley is still hitting the 3-point shots that pushed Oregon to its first Final Four in 2019, and 6-foot-7 redshirt sophomore Sedona Prince — whose viral Tik Tok video about the minimal exercise equipment available for players in San Antonio helped compel the N.C.A.A. to create a weight room at the tournament — matched her career high with 22 points in its upset of No. 3 seed Georgia.

If Oregon beats Louisville, it might have a chance for redemption against a No. 1 seed Stanford team that beat the Ducks twice during the regular season.

Also pushing for an upset is No. 6 seed Michigan, which reached its first round of 16 after playing just 18 games in the regular season because of coronavirus protocols. The Wolverines and their all-American, Naz Hillmon, are hitting their shots at the right time, with players like Leigha Brown and Hailey Brown using their moment in the limelight to show they are far more than Hillmon’s supporting cast. Matching up with the Lady Bears won’t be easy, but Michigan’s players proved with their victory over No. 3 seed Tennessee that they can win even when they’re not as big or as strong as their opponents.

“We’re going to scout their stuff, but at the end of the day we’re going to do what we do best,” Hailey Brown said Thursday. “It’s going to be a tough one, but we’re ready for the challenge.”

Will Maryland run out of gas?

The Terrapins’ slogan, “All gas, no brakes,” has proved apt over their first two games of the tournament, given their final scores of 98 and 100 points. But No. 6 seed Texas has a more complete team than Maryland has seen so far, and specifically, the Longhorns have one of the tournament’s most complete players in W.N.B.A.-bound Charli Collier. The 6-foot-5 center can single-handedly disrupt any matchup, and should be able to challenge Maryland’s dynamic sophomore duo, Ashley Owusu and Diamond Miller, who both tend to score at will under the basket.

If they’re able to get past Texas, the No. 2 seed will likely face No. 1 seed South Carolina, which also has a team-leading sophomore post presence in Aaliyah Boston. The Gamecocks are another physical, young team whose performance against Maryland should show whether anyone has a chance of stopping — or just keeping up with — the Terrapins’ offensive firepower. Whether they coast into the Final Four or find themselves fighting to survive and advance against these two tough teams, Maryland should offer some of the most exciting basketball of the tournament’s second weekend.

Texas A&M will try to avoid another nail-biter.

The Aggies have played some of the most entertaining — and heart-stopping, for their fans — games of this tournament, with both their first and second games coming down to their very last plays. The second, in overtime, was the first buzzer-beater of the women’s tournament.

Whether they can assert themselves against even tougher competition, though, will be telling. No. 3 seed Arizona blew out their its round opponent, Stony Brook, 79-44, and won a tight game against No. 11 seed Brigham Young, showing its ability to both win big and play close. With Texas A&M guard Jordan Nixon playing her best basketball of the season, the Wildcat-Aggie matchup will likely be a battle of the backcourt, with Nixon squaring off against Arizona senior Aari McDonald and her average of 19 points. The question is whether that competition will spur Texas A&M to play their best basketball of the tournament.

“We’re supposed to be a No. 2 seed, and both teams have played us to the last possession,” said Texas A&M coach Gary Blair. “Is that because they have played so well, or we underplayed? I think it’s just March.”