With the coronavirus sweeping through the N.F.L. at a greater extent than it had all season, Week 12 had an uneasy edge to it, and several teams had to cobble together solutions to problems brought by player absences resulting from positive tests and close contacts. The league soldiered on, however, getting all 12 of Sunday’s games in regardless of the issues. But a Tuesday game in which as many as 20 Ravens players could be out because of a coronavirus outbreak still looms.

Here’s what we learned:

The Titans know how to hammer a weakness. The Colts were dealt quite a blow when defensive tackle DeForest Buckner was ruled out of this game following a positive test for the coronavirus. The massive interior lineman has been a key part of Indianapolis’ stout defense, and without him — and with Indianapolis missing two other important starters on defense — the Colts had absolutely no answer for Derrick Henry, who rumbled for 178 yards and three touchdowns. All three of Henry’s touchdowns came in a laugher of a first half in which Tennessee went into the locker room leading by 35-14. The rest of the game was merely a formality.

With the 45-26 win, the Titans (8-3) took sole possession of first place in the A.F.C. South. They stand a good chance of holding onto that lead, as they face teams with losing records in three of their final five games. 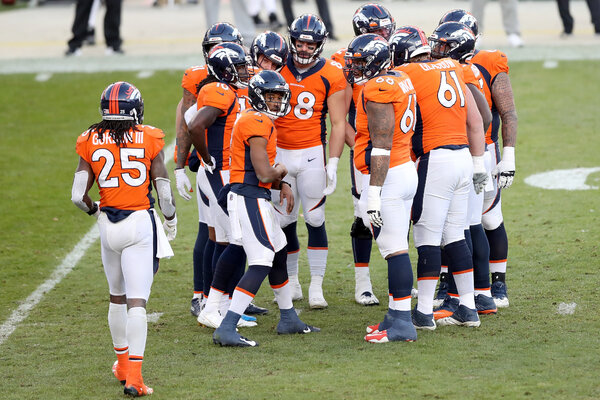 Denver didn’t stand a chance. Despite not having a quarterback on the roster as a result of Jeff Driskel testing positive for the coronavirus and the team’s three other quarterbacks being ruled out as close contacts, the Broncos were thrown to the wolves against the red-hot New Orleans Saints. Denver running back Phillip Lindsay officially started at quarterback for Denver, but Kendall Hinton, a rookie wide receiver from the team’s practice squad, took the majority of snaps under center despite not having played the position regularly since 2017 — his third year in college at Wake Forest.

Hinton, who took the impossible assignment without complaint, completed just 1 of 9 passes for 13 yards, and was intercepted twice. The Broncos lost, 31-3, and are likely wondering why the N.F.L., which has bent over backward to accommodate other teams that had virus-related issues this season, did not find a way to delay the game until a quarterback could be added to their roster.

You can still see something new in an N.F.L. game. In the third quarter of Carolina’s game against Minnesota, the Panthers’ Jeremy Chinn, a rookie linebacker, scooped up a Kirk Cousins fumble and returned it 17 yards for a touchdown. Carolina’s kickoff resulted in a touchback, and on the first play of the next series, as the broadcast crew attempted to recap Chinn’s previous touchdown, he helped force a Dalvin Cook fumble before picking the ball up and taking it 30 yards for his second score. Chinn became the first player with multiple fumble returns for a touchdown in a game since Fred Evans did it for Chicago in 1948. Chinn is also believed to be the first defensive player in N.F.L. history to score touchdowns on consecutive snaps.

Somehow that 14-point swing, which resulted in the Panthers leading by 21-10 early in the second half, did not end with a Carolina victory. Minnesota chipped away at the lead and Cousins eventually found Chad Beebe for a 10-yard touchdown pass with just 46 seconds left in the game to secure a shocking 28-27 win at home.

A game can go sideways on one play. The Raiders were 3-point favorites on the road in Atlanta, but after a slow first half, Las Vegas was trailing the Falcons by 6-3 late in the second quarter. Things seemed to be turning the Raiders’ way when Atlanta’s Younghoe Koo missed a 40-yard field goal attempt wide right. Unfortunately for Las Vegas, safety Dallin Leavitt fell down at the end of the play and rolled into Koo, receiving a somewhat questionable roughing the kicker penalty. Four plays later, Matt Ryan found wide receiver Calvin Ridley for a 4-yard touchdown pass.

From there the Falcons were off to the races, taking advantage of four more Las Vegas turnovers after an earlier fumble. Atlanta repeatedly found ways to score after Raiders giveaways and walked away with a laughable 43-6 win.

No one can cover Tyreek Hill. Tampa Bay came into the season thinking its defense could power a deep playoff run, but Hill showed exactly how vulnerable the Buccaneers are to elite speed by burning the team for 203 yards receiving and two touchdowns — in the first quarter. It was the most receiving yards in a quarter for any player since 2006 and the most receiving yards in a game for a player all season. But Hill wasn’t done and finished the day with 13 catches on 15 targets for 269 yards and three touchdowns as the Chiefs held on to beat the Buccaneers, 27-24.

In the must-see play of the game, Patrick Mahomes, who increasingly seems assured of winning his second career Most Valuable Player Award, completed a 75-yard touchdown pass to Hill in which the ball traveled more than 60 yards in the air.

Sam Darnold is not the answer for the Jets. With a 55-yard opening drive that ended in a 38-yard field goal, the winless Jets took a 3-0 lead over the Miami Dolphins. From there, things only went downhill. Darnold, in his first action since Week 8, was far less effective than Joe Flacco had been in his place, leading his team on drives that resulted in six punts, two interceptions, a missed field goal and a turnover on downs in which the ghost of Frank Gore was knocked back for a 1-yard loss on a fourth-and-1 play in the red zone. After that 3-0 start to the game, the Jets lost by 20-3.

The 0-11 Jets have only one game remaining against a team that currently has a losing record.

Aaron Rodgers is at the top of his game. Rodgers dominated Chicago by throwing four touchdown passes in a 41-25 victory, and in doing so he reached 50,000 yards passing for his career. In a postgame interview, Rodgers laughed off such feats, saying, “It means I’ve been playing a long time. Some of those are longevity records.” But it is worth remembering that Rodgers has significant career advantages over Brett Favre, the Hall of Fame quarterback he replaced in Green Bay, in rate-based statistics like touchdown percentage, interception percentage, adjusted net yards per attempt and winning percentage.

In a season in which he continually seems to get better, Mahomes has had at least 30 completions and 300 yards passing in four consecutive games — an N.F.L. record. His 462 yards passing on Sunday were the second-most in his outrageous career, and 229 of them came in the first quarter. He is up to 3,497 yards passing and 30 touchdowns for the season and has thrown just two interceptions.

Because of his size, many people assume Derrick Henry prefers to run inside the tackles, but the Titans’ star running back is equally adept at running to the outside. In Sunday’s dominant effort against Indianapolis, Henry gained 146 of his 178 yards rushing on runs outside the tackles, according to the N.F.L.’s Next Gen Stats database, with all three of Henry’s touchdowns coming on outside runs to the right.

Hill’s 269 yards receiving are tied with Del Shofner of the Giants for the 15th most in an N.F.L. game and fell 67 short of Flipper Anderson’s record of 336, which was set for the Los Angeles Rams in 1989. While Calvin Johnson and Julio Jones have each topped 300, Anderson’s record has endured.

One* Sentence About Sunday’s Games

*Except when it takes more.

Bills 27, Chargers 17 Buffalo’s defense did most of the heavy lifting in this win at home, but Josh Allen threw a 2-yard touchdown pass, and ran in a 3-yard score, giving him 15 career games with both a passing and a rushing touchdown. Allen trails only Cam Newton, who had 20, for the most such games in a player’s first three seasons.

Chiefs 27, Buccaneers 24 Patrick Mahomes threw for 462 yards and Tyreek Hill had 269 yards receiving, but of all those yards, the last 8 were potentially the most vital as the short pass from Mahomes to Hill with 1 minute 15 seconds remaining gave Kansas City a first down and allowed the team to run out the clock in a game that had been slipping away from them.

Titans 45, Colts 26 Indianapolis got 295 yards passing from Philip Rivers, and two rushing touchdowns from backup quarterback Jacoby Brissett, but that wasn’t nearly enough to compete with Tennessee, which could have taken the entire second half off on offense and still won.

49ers 23, Rams 20 Running backs Raheem Mostert and Jeff Wilson returned from injury — a most welcome sight for San Francisco — but this upset was powered more by wide receiver Deebo Samuel, who had 11 catches for 133 yards, and defensive tackle Javon Kinlaw, who had a 27-yard pick-6.

Patriots 20, Cardinals 17 Arizona came into the day averaging 414.3 yards a game, but New England limited the Cardinals to a respectable 298. Kyler Murray was held without a touchdown pass for the first time since Dec. 1, 2019, 14 starts ago.

Browns 27, Jaguars 25 Florida’s warm weather helped wake up Cleveland’s passing game, with Baker Mayfield throwing for 258 yards and two touchdowns. But the Browns are unlikely to change their run-heavy approach going forward since Mayfield also missed badly on several other potential touchdowns while running back Nick Chubb raced for 144 yards on 19 carries.

Vikings 28, Panthers 27 In one of the more impressive make-good moments you’ll see, Minnesota wide receiver Chad Beebe muffed the catch on a punt return late in the fourth quarter, letting Carolina extend its lead with a field goal, only to then score the go-ahead touchdown on his team’s ensuing possession.

Saints 31, Broncos 3 While Denver was limited to 13 yards passing, New Orleans managed just 78 in Taysom Hill’s second career start at quarterback. That will be plenty as long as the Saints’ running game can generate 229 yards and four touchdowns every week.

Packers 41, Bears 25 It was 41-10 in the third quarter when the Packers decided they had tried long enough and let Chicago do whatever it wanted for the rest of the game. The result was a final score that was far closer than the game ever felt, but it was easy to imagine Green Bay scoring 50 or more points if the team had kept pressing.

Giants 19, Bengals 17 Despite losing quarterback Daniel Jones to a hamstring injury in the third quarter, Big Blue was able to fight its way past a Joe Burrow-less Cincinnati. Backup quarterback Colt McCoy didn’t do much, but the Giants scored three field goals following Jones’s injury, which was enough to secure the team’s third straight win. The 4-7 Giants are tied with Washington for first place in the N.F.C. East ahead of 3-6-1 Philadelphia’s game on Monday against Seattle.

Falcons 43, Raiders 6 After the Raiders’ loss last week, much of the talk centered on how well quarterback Derek Carr had played against Kansas City. He turned that narrative on its head by losing three fumbles and throwing a pick-6 in a humiliating loss to Atlanta.

Dolphins 20, Jets 3 Because of a thumb injury on Tua Tagovailoa’s throwing hand, Ryan Fitzpatrick was forced into a start against one of his many former teams, and he helped get Miami back on track following last week’s loss to Denver by throwing for 257 yards and two touchdowns.