DETROIT — Robbie Grossman hit a two-run homer in the bottom of the 10th inning to give the Detroit Tigers a 3-2 victory over the Yankees on Friday night.

The Yankees took the lead in the top of the inning when automatic runner Aaron Judge came home from third on a passed ball. Justin Wilson (1-1) retired the first two Detroit batters in the bottom half, but on a full count, Grossman sent a high drive that cleared the fence in left field.

Yankees closer Aroldis Chapman returned from a non-coronavirus illness and pitched a scoreless ninth, but Manager Aaron Boone opted against using the left-hander for a second inning.

Rougned Odor homered and had four hits for the Yankees, who dropped a bizarre game that also included a three-ball walk for New York hitter Gio Urshela.

Each starting pitcher — Gerrit Cole for the Yankees and Casey Mize for Detroit — was a former No. 1 overall draft pick. Mize, the top pick in the 2018 draft, allowed a run and five hits in five innings. He struck out seven with no walks.

Cole was picked first overall by Pittsburgh in 2011. He’s allowed two or fewer earned runs in 10 of 11 starts this season. He allowed a run and six hits in six innings Friday.

Detroit took a 1-0 lead in the third on Jeimer Candelario’s R.B.I. single. Odor tied it when he led off the fifth with a homer.

The Yankees put two men on later in that inning, but Mize struck out DJ LeMahieu and Giancarlo Stanton to end the threat — the third time he’d struck out each of those two hitters at the top of the Yankees lineup.

Stanton struck out four times in all, going hitless in his first game back from the injured list. He’d been out because of a strained left quadriceps.

Candelario reached base for a 24th straight game. 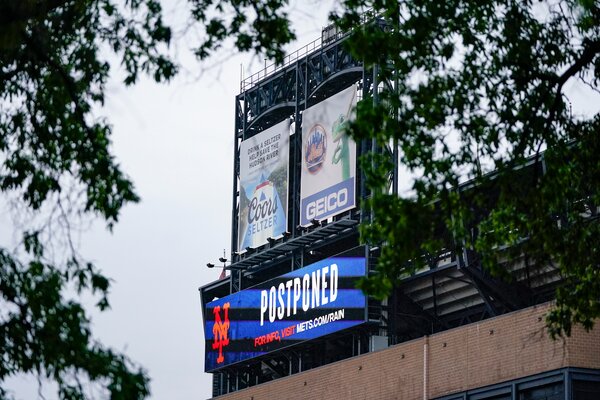 The game between the Mets and Atlanta Braves was postponed because of a forecast of rain on Friday night.

The decision was made more than two hours before the first pitch with up to two inches of rain expected. No makeup date was announced.

The series is the first three Braves’ visits to New York.

The Mets have played a league-low 44 games and they already are scheduled to play doubleheaders against the Washington Nationals and Philadelphia Phillies in June as well as a single nine-inning makeup against the Nationals.

Mets Manager Luis Rojas said he believed the focus will be making up Friday’s game during the July 26-29 series between the teams at Citi Field.

Rojas wasn’t sure if the Mets would pitch David Peterson or Jacob deGrom on Sunday. Peterson was scheduled to start Saturday. DeGrom would go if Rojas decides to use the ace on his usual five days rest.

Rojas also said first baseman Pete Alonso (right hand sprain) is progressing well. The manager said he initially thought Alonso, one of 17 Mets on the injured list, would need a rehab assignment. However, he added that the 2019 Rookie of the Year winner “looks a lot better than what I expected.”

With Walker still officially on the injured list because of right side tightness, the Mets will have to make a roster move before Saturday’s game.

The postponement was the second in three days for the Mets, who swept a doubleheader from the Colorado Rockies on Thursday. The Braves got a second straight day off after completing a two-game series in Boston Wednesday with a 9-5 loss.