Each of the bracingly intimate films that comprise Jonas Carpignano’s loose-knit Calabrian trilogy are self-contained to a certain degree; like “Mediterranea” and “A Ciambra” before it, “A Chiara” is meant to be understood on its own. But the small handful of overlapping characters between them link their respective stories together on a macroeconomic level in a way that deepens and belies the myopia of their neorealist construction.

The triptych begins with two refugees making the perilous trek from Africa to the Italian port city of Gioia Tauro, only to find themselves exploited by the people who got there first. The next chapter takes a half-step up the local hierarchy by focusing on a young Romani boy who idolizes his racist older brother, but struggles to reconcile the hostility of that us-vs-them mindset with the warmth he feels toward his foreign new friends, and his family’s own history of crossing borders in search of a home.

Carpignano reaches for yet another rung in the ladder with “A Chiara,” ending his climb somewhere toward the top of the middle as he trains his ever-reactive camera on the oblivious teen daughter of a wealthy Calabrian drug runner. Wounded as Chiara is to discover she’s the Meadow Soprano of Gioia Tauro, that realization only draws blood when she pops the bubble of her own privilege and sees the devastating trickle-down effect the Malavita continues to have on the people from Carpignano’s previous films. As a coming-of-age story about a 15-year-old forced to reconsider her place in her family after finally recognizing their place in the world, “A Chiara” can be vague and heavy-handed (even at the same time). As the final layer of a mosaic that renders Gioia Tauro a microcosm of the modern world — of its cruelty and solipsism, but also the soft porousness that allows for visions of a different future to seep through its socioeconomic decay — it’s hard to imagine a more harrowing or distressingly unsettled finish.

Played with arresting intensity but Swamy Rotolo — another of Carpignano’s indelible local finds — Chiara is first introduced in a woozy close-up that finds her doing cardio to modern pop music at a well-furnished gym. The camerawork hints at her latent dislocation from herself, while the shot’s modern trappings (and its clumsy use of a treadmill as a metaphor for a girl stuck in place without setting foot in the real world) immediately distance “A Chiara” from the rustic environs of the trilogy’s previous films.

From there, Carpignano eases into an extended stretch of day-in-the-life naturalism, as if compensating for showing his cards at the start. He takes us inside the warm and spacious house where Chiara lives with her sisters and their parents (all Rotolo’s actual family, not that you’ll need to be told), and he follows along as she shit-talks people on Instagram and vapes with her friends. Chiara’s obliviousness mirrors our own, and the longer we spend watching her be a normal teenager the easier it gets to accept that she isn’t dumb or in denial about what her dad does. On the contrary, she’s a smart, furrowed, headstrong kid whose privilege excuses her from the natural curiosity required to question where it came from, or at what cost — a tunnel-vision she inherited from her loving father Claudio (Claudio Rotolo), who never brings his work home.

Well, maybe that’s not entirely true. Late one night — in the wee hours after Chiara’s older sister’s 18th birthday party, where our heroine slow-danced with her dad to Ed Sheeran in between kitschy Italian ’70s pop songs — Chiara wakes from a strange nightmare to see Claudio scrambling over a nearby rooftop seconds before a drive-by car bombing. The next day’s news broadcast tells Chiara that her dad is a middleman for the ’Ndrangheta, and now a wanted fugitive. She doesn’t want to believe it, but then she happens upon a fake wall in the family living room that leads to an underground bunker full of burner phones and other mafia paraphernalia. It’s a vividly paradoxical moment, like a kid who learns that Santa Claus isn’t real by stumbling across the North Pole. 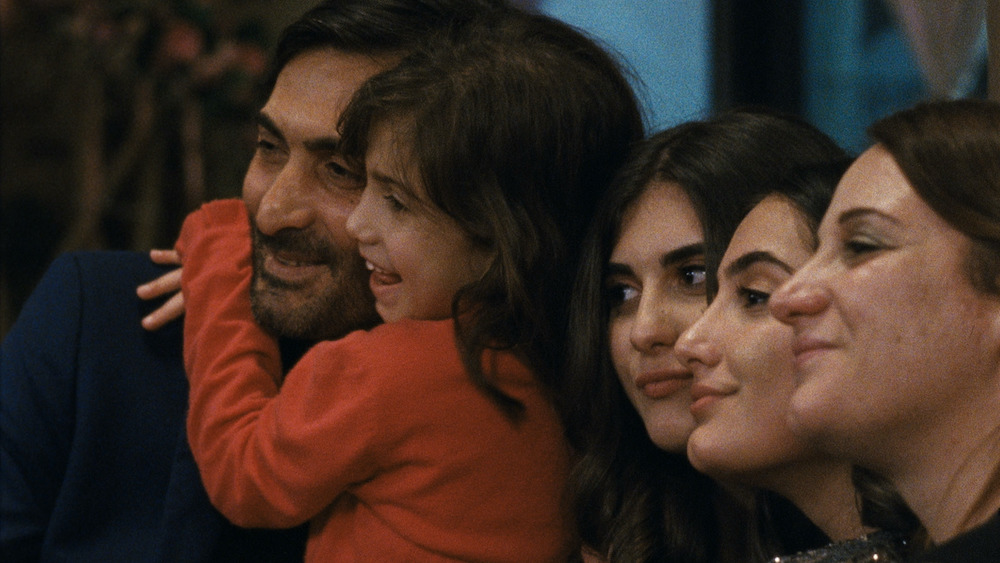 The hits just keep on coming from there, as Chiara — clenched and furious where a typical coming-of-age story character might default to a state of wide-eyed naïveté — starts following the breadcrumbs to find her absent father. That search can be as plodding and static as the sound of Chiara’s shoes on a treadmill (or the numb tones of Dan Romer and Benh Zeitlin’s score, which is often reduced to gauzy ambiance), but it’s seldom been so riveting to see a self-aware teen realize they’ve been living a lie.

One especially intense car scene between Chiara and her older sister hits with the kind of pod-people queasiness more endemic to the sci-fi likes of “Invasion of the Body Snatchers,” as the precocious Chiara realizes just how alien the adult world can be. She’s not a girl, not yet a woman, and Carpignano’s film is at its most vital whenever it leverages the specificity of Chiara’s situation to explore the universal anxieties of those liminal years between knowing too little and knowing too much — between the plausible deniability of recognizing who your parents are, and the personal complicity of following in their footsteps. That push-and-pull only grows more aggressive when the government steps in and forces Chiara into foster care. The ’Ndrangheta takes a very literal approach to the idea of a crime family, and so kids are often separated from their parents in order to stem the poison in their veins.

If that plot wrinkle doesn’t instill “A Chiara” with all the urgency it should, that’s because the film often points away from its namesake in ways that leave her feeling vague instead of molten. The further she follows the clues toward the fringes of Gioia Tauro and into the rundown areas beyond, it feels as if Carpignano is using Chiara to poignantly look back at the same familiar characters that she would sooner look down on.

Long sequences observe Chiara as she makes first contact with the area’s Romani and refugee populations, all of which are shot with a luminescent honesty that reflects the decade Carpignano spent living near or amongst these communities. She meets a Romani woman who knows her dad by reputation (not in a good way), and that encounter alone is enough to understand how Chiara has been raised to perpetuate the inequality between them. A run-in with some recognizable local teens is all the more powerful because of how it favors Chiara’s resentment over the guilt and second-guessing their existence causes her. Growing up doesn’t always mean getting better.

But, three films deep into this Calabrian saga, the dynamics at work are so complex that watching them play out on Chiara’s face turns her into a flat screen that obscures our view of whatever might be happening behind it. Chiara herself isn’t traced with a fraction of the specificity that Carpignano brings to the world around her or the situation that forces her to acknowledge it for the first time in her life, and every time we revisit that treadmill — which assumes a different form in the film’s ambivalent final shot — it reaffirms how little we know about the girl who’s running on it.

All the same, the devil is in the details, and Carpignano knows them so well. The sibling energy between Chiara and her sisters is so real that it feels like they’re reliving past squabbles, and Claudio’s hangdog love for his favorite daughter buttresses arguments so vividly relatable that you almost forget that there’s a mountain of smuggled cocaine between them. “I’m responsible for what I do, not for what others do!” Claudio barks at Chiara, only to disagree with himself two seconds later and declare that he alone gets to decide what she does next. However uncertain we may be about who Chiara is or ultimately decides to become, Carpignano’s trilogy has made it powerfully clear just how far that decision will resonate.

“A Chiara” screened at the 2021 New York Film Festival. NEON will release it theatrically in the United States.