It’s adapted from a popular novel, stars an actor everyone is talking about, received an NC-17 rating, and has already faced a minor backlash. So, yes, Blonde is one highly anticipated movie. The biopic (sorta) about Marilyn Monroe—which premieres on Netflix in September—is a fictionalized version of the actor’s life, told from her perspective.

“It was the most intense work I’ve ever done as an actress,” star Ana de Armas told Entertainment Weekly in 2019. “It took me a year to prepare for that—research and accent and everything you can imagine.” She added, “It was the most beautiful thing I’ve ever done. Can’t wait for it to come out.”

If you can’t wait for it to come out, too, read on to find out everything you need to know about the Marilyn movie ahead of time.

First, what is Blonde about?

Blonde is clearly about Marilyn Monroe (aka Norma Jeane Baker), but it’s not totally based in reality. The film is based on Joyce Carol Oates’ 2000 book of the same name, which is a novel, not a biography.

“The book is a novel, so it takes us into the interior of the subject and its focus is emotional, psychological, and spiritual,” Joyce told CNN. “What is ‘new’ about it is the concentration upon the subject from the inside. I would not suggest that anyone read Blonde as if it were a conventional biography. I don’t invent very much, but I imagine everything.

Who is making Blonde?

Blonde is written and directed by Andrew Dominik, who also wrote and directed Chopper (2007), The Assassination of Jesse James by the Coward Robert Ford (2007), and Killing Them Softly (2012). He also directed a couple episodes of Netflix’s Mindhunter.

Joyce gave the adaptation her approval. “Andrew Dominik is a very brilliant director,” she said at the 21st Neuchâtel International Fantastic Film Festival, as reported by Variety. “I think he succeeded in showing the experience of Norma Jeane Baker from her perspective, rather than see it from the outside, the male gaze looking at a woman. He immersed himself in her perspective.”

Who stars in Blonde?

Ana de Armas plays Monroe in Blonde. The star is known for Knives Out, Deep Water, No Time to Die, and The Gray Man.

“We worked on this film for hours, every single day for almost a year,” Ana told Netflix Queue. “I read Joyce’s novel, studied hundreds of photographs, videos, audio recordings, films—anything I could get my hands on. Every scene is inspired by an existing photograph.” She also spent around three hours in hair and makeup everyday to achieve Marilyn’s iconic look. 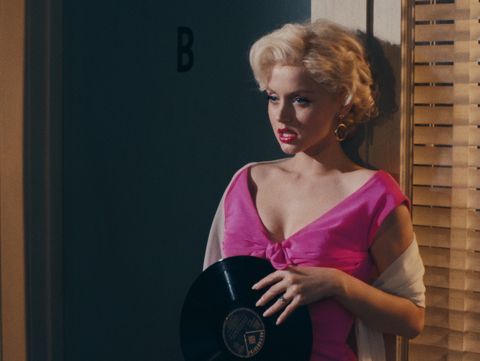 What is Blonde rated?

Blonde received a rare NC-17 rating—which means those 17 and under are not allowed into a theater to watch a film—making it the first Netflix Original movie with this rating. It received the NC-17 rating due to its sexual content, which includes a scene showing a sexual assault.

“It’s a demanding movie. It is what it is, it says what it says,” Andrew told Screen Daily. “And if the audience doesn’t like it, that’s the fucking audience’s problem. It’s not running for public office.”

When will Blonde be released?

Blonde will premiere at the Venice Film Festival, which takes place from August 31 to September 10. For those of us not fancy enough to attend the first showing in Italy, the movie will hit Netflix on September 28.