Tipping Point has awarded many contestants thousands of pounds during its eight years on ITV. During an old episode of the popular gameshow, one finalist was branded the “unluckiest contestant ever” after an awful final round which saw him fail to answer the majority of questions correctly. But what did he do when he was faced with the option of trading?

“Grant has made it through to our final, he’s currently got £1450 in the bank – very well done!” Host Ben Shephard remarked.

“If you do get £10,000, what would you do with the money?” He asked and Grant revealed: “There are so many things you think ‘I want to buy this or I want to buy that. The girlfriend saw a handbag yesterday, I’d love to buy her that. I wouldn’t mind a little present for myself as well.”

“What sort of thing would you like?” Ben continued and Grant revealed: “A putter, a new [golf] putter.”

“Well hopefully we can make that happen for you right now Grant, in a few moments I’m going to ask you to put the jackpot counter into the machine,” Ben explained.

“Get it out again? You go home with £10,000! Of course, it’s not quite as easy as it sounds, I’m going to show you six question categories, for each category you can choose to play one, two or tree counters into the machine. 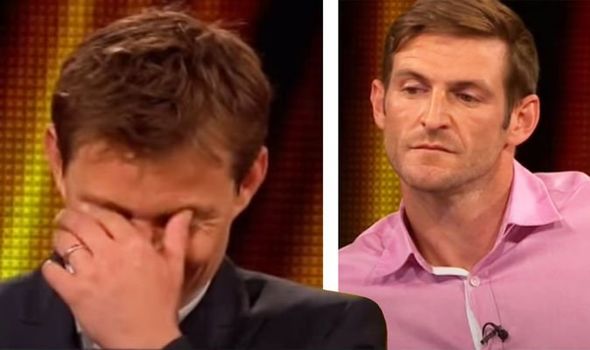 “If you don’t manage to do it you still get £50 for every counter that drops for you during this game, but we would love for yo to leave with £10,000,” Ben added.

Grant then asked for the jackpot counter to be dropped into drop zone one and the machine lit up that area.

“Very quick clean drop,” Ben was heard commenting. “It’s flipped the mystery counter so that’s down already as well. That’s a lovely start, six counters to start with. That’s £300 so we’re up to £1750 in the bank, the jackpot counter is right there, nice and flat up, against the wall.

“Okay, shall we have a look at your endgame subjects? Here they are…” Ben continued. 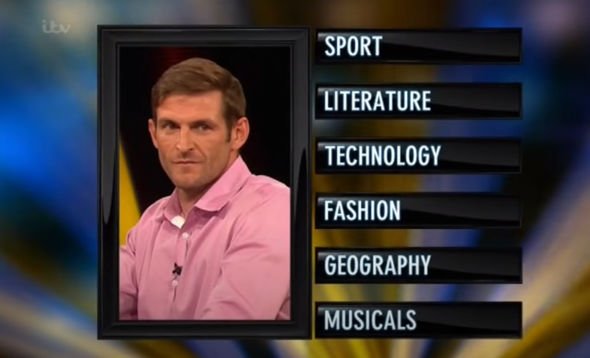 Grant had sport, literature, technology, fashion, geography, musicals and he chose to start with technology for three counters.

He was asked: “What is the name of the machine that selects Premium Bonds winners? Ernie, Bertie or Alfie.”

Those watching at home saw him choose Ernie as an “educated guess” which was the correct answer.

Grant asked for the three counters to be dropped from zone one, the first slid next to the jackpot counter, the second pushed one over the Tipping Point edge adding £50 to his current total.

The third counter increased his total by £450 but the jackpot counter remained in its place. 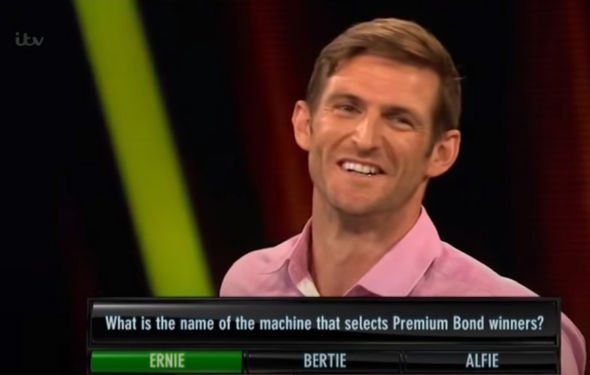 We’ve got to stay positive now!

Musicals was the second category Grant chose for two counters and he was asked: “Which comedian and playwright wrote the musical ‘We Will Rock You’? David Baddiel, Vic Reeves or Ben Elton.”

The contestant chose David Baddiel which was the wrong answer so now counters were released into the machine this time.

Sport was up next for three counters and the question posed to Grant read: “By what name is the sport ‘jeu de paume’ commonly known in English? Real tennis, lawn tennis or table tennis.” 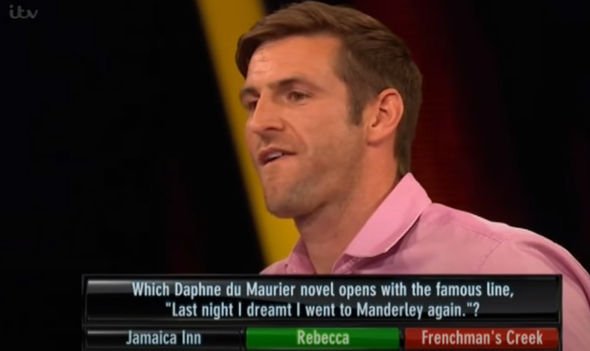 Grant chose fashion for two and was asked: “Which of these fragrance concentrations is the strongest? Eau de Perfume, Eau de Toilette or Eau de Cologne.”

After choosing Eau de Cologne, Grant was left disappointed when Eau de Parfum was revealed as the correct answer.

The geography counter was chosen next for two counters and Grant was asked: “The source of the River Thames rises in which range of British hills? Cotswolds, Chilterns, Mendips.”

“Absolutely no idea,” the contestant admitted. “So I’m going to go for Chilterns because it’s in the middle.”

But it was the wrong answer again, the Cotswolds was the correct answer.

Grant asked Ben: “Have you ever had a longer spell of wrong answers [on the show]?” And Ben replied: “We’ve got to stay positive now! We’ve got one last category.

“I think there’s another read like coming,” Grant remarked and chose Frenchman’s Creek, which was the wrong answer again.

“The way things are going – I think I know what you’er going to say. But, you can trade that money you’ve got there for three last counters to go into the machine, with the hope of getting that Jackpot across the Tipping Point.”

Grant chose to take the money instead of the trade.

Those watching the episode took to social media to discuss.

A fan said: “Those were hard questions!! Not surprised he didn’t get them!” While another wrote: “He was smart to take the money.”

“Those questions were actually quite horrible. At least he didn’t leave empty-handed,” a comment read.