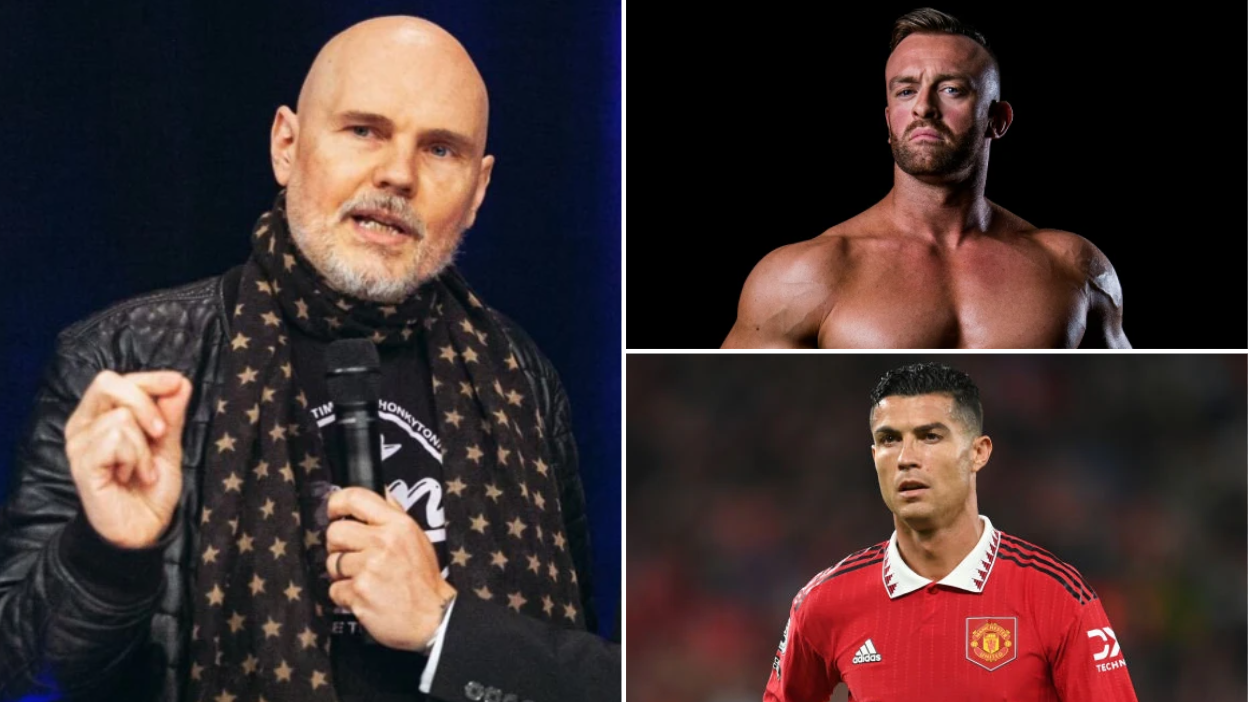 Billy Corgan has weighed in on the current situation between Nick Aldis and the National Wrestling Alliance.

The Smashing Pumpkins star – who revived the legendary promotion five years ago – has opened up on his changing relationship with the former Worlds Champion before the NWA 74 doubleheader this weekend, and compared it to the rumoured issues between Manchester United and Cristiano Ronaldo.

He exclusively told Metro.co.uk: ‘I’m not the biggest, as we say over here, soccer fan. Jack Bates who plays with the Smashing Pumpkins, is a UK guy, he’s a Manchester United guy.

‘So you hear who’s coming, Ronaldo, all that stuff. There are just times when all the best intentions in the world don’t add up to where you want them to in reality. We’ll see here where Nick Aldis’ future goes, with or without the NWA.’

For a long time, the Norwich-born wrestler has been the focus of Billy’s revived NWA brand, but reported issues behind the scenes have seen him removed from this weekend’s world title match against defending champ Trevor Murdoch.

Instead, Tyrus is taking his place with Aldis – who is set to address fans in an Open Forum to kick off night one on Saturday evening – facing Flip Gordon in a marked departure in presentation.

‘I think the simplest way to explain it is, it’s the growing pains right? Nick is a star, and Nick deserves to be treated like a star, paid like a star, and respect like a star. because of Nick’s ability and leadership, the NWA has grown,’ Billy pondered.

‘Now, the NWA is in a different position five years on, as is NIck Aldis. You see a sort of tension there between the perspectives – let’s call it the individual brand of Nick Aldis as the true international star, and the August brand of the NWA entering it’s 75th year as we pass the 74 anniversary mark.’

The 55-year-old musician and wrestling promoter insisted the issues aren’t necessarily ‘bad tensions’, but it’s ‘probably unfortunate’ that they’re playing out in public ‘in a hyperbolic social media atmosphere’.

I will always pay respect to the fact that Nick Aldis helped rebuild this company,’ he added, before suggesting the wrestler could always end up moving on.

‘The thing I can tell you is, no matter what happens whether he’s with or is not with the NWA, or he enters a different frame of perspective going forward as a businessperson, he’s gonna be successful no matter what he does.’

However, Billy is also focusing on the future – both immediate and longer term – and he’s thrilled to see where NWA is now, five years after he essentially resurrected the iconic old school letters and set about finding a spot in the contemporary wrestling world.

‘I feel like finally the vision that I had, the reason I did it, the culture of what I’ve been building, it’s finally clicking at the level that I need it to click at,’ he explained.

He noted that the talent may ‘come and go’, while the landscape and wider wrestling culture will continue to be ‘dynamic’, but he is presenting the product that works for him.

‘We’ve kinda shifted now towards a more tougher, grittier product. The roster is a reflection of that – event the independent talents that we work with who work with other companies,’ he enthused.

‘IF the talent’s coming in the NWA, you start to think that’s gonna be interesting because what the NWA would do with them would be different to what they would do in other places.

‘I think that’s a credit to those talents that they’re flexible, and at the same time it’s also credit to what we’re able to do to say, “This is who we are.” ‘

Metro.co.uk will have much more from Billy Corgan in the coming days and weeks, including his in depth thoughts on NWA’s goals and continued growth – and it’s clear the boss is ambitious as ever.