Cobra Kai is finally back for another round on Netflix with even more Karate Kid callbacks than ever. The plot of Season 3 notably sees Daniel LaRusso (Ralph Macchio) taking a trip to Japan and reconnecting with major characters from The Karate Kid Part II.

Perhaps the biggest return of the season might not necessarily be considered a surprise, since it was teased at the end of Season 2. However, as was recently revealed by Macchio, it wasn’t a done deal when that tease was initially shot and might not have come together in the end.

If you’ve finished the latest season of Cobra Kai, you already know that Elisabeth Shue makes a grand return as Ali Mills, now sporting a hyphenated last name and a spiffy doctorate. This return was hinted at when Ali returned a Facebook message from Johnny (William Zabka) last season. Shue last played the character – Johnny’s ex-girlfriend and love interest for Daniel – in the first film back in 1984.

During a recent press day for the Netflix series, Macchio said that Shue’s return wasn’t a done deal up until the final scripts were delivered. Prior to that, according to Polygon, a contingency plan was in place and a pretty lame one at that.

“That was the fallback, the ‘how are we gonna vacuum ourselves out of the room’ from what we’ve written,” Macchio explained. “Which would be her husband was doing the Facebook back-and-forth with Johnny.”

Sounds like a bit of a needlessly cruel and pointless diversion for Johnny. Were this ending to have gone through, fans would surely have noted that it was a slapdash band-aid over a planned cameo that fell through. Thankfully, there was no need for plan B in this case.

Elisabeth Shue has kept busy since ‘The Karate Kid’ 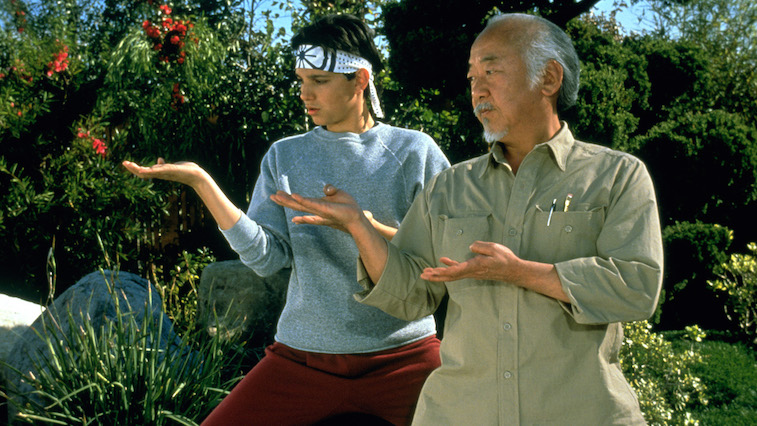 One of the big question marks hanging over Shue’s potential return was the fact that she’s kept fairly busy in the last 36 years. After her breakout role in The Karate Kid, Shue went on to replace Claudia Wells as Marty McFly’s girlfriend, Jennifer Parker, in the Back to the Future sequels. Later, she received an Oscar nomination for Best Actress for her role opposite Nicolas Cage in 1995’s Leaving Las Vegas.

More recently, viewers might have seen Shue as Madelyn Stillwell on Amazon’s The Boys. Stillwell was the Vice President of Hero Management for Vought Industries and oversaw the activities of The Seven. She also had what many found to be a disturbingly sexual maternal relationship with the group’s main member, Homelander (Antony Starr). Stillwell was killed off at the end of Season 1, but Shue returned for a cameo in Season 2. Shue certainly seems to enjoy a nice surprise character return, doesn’t she?