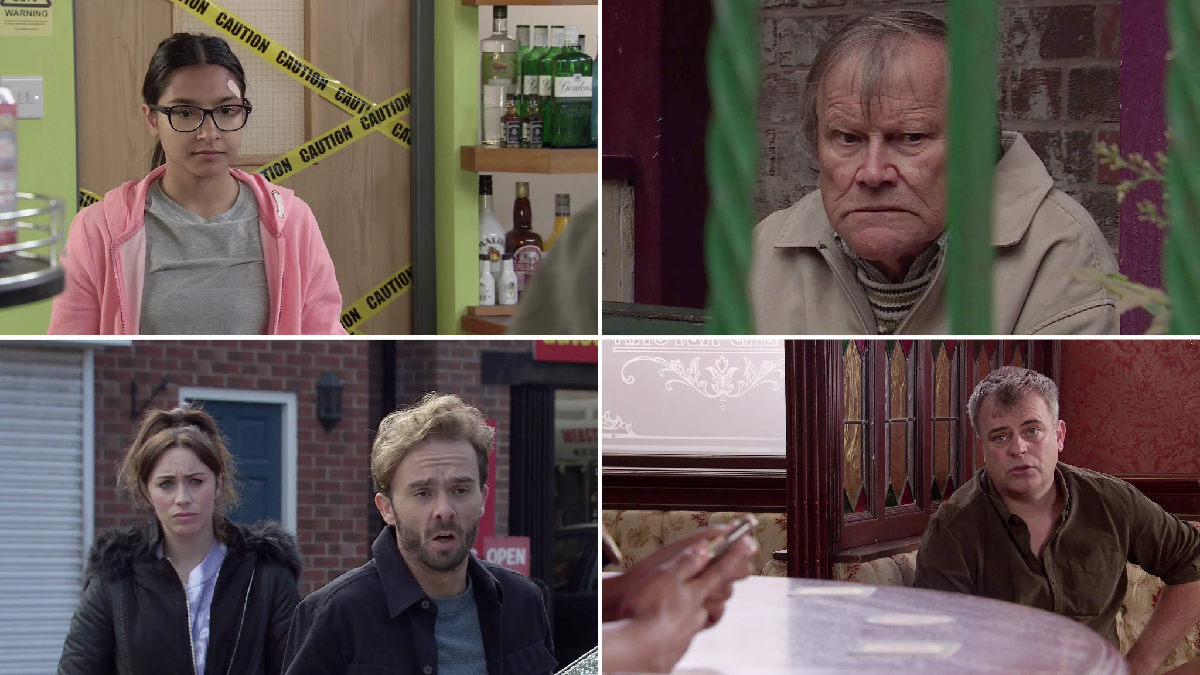 Coronation Street isn’t pulling any punches as the aftermath of the sinkhole horror brings new drama. As David Platt (Jack P Shepherd) is forced to take the blame for the tragedy, Roy Cropper (David Neilson) is haunted.

And another tragedy is about to unfold.

Meanwhile, Nina Lucas (Mollie Gallagher) and Asha Alahan (Tanisha Gorey) are on the road to catch Corey Brent (Maximus Evans) – and they have a breakthrough at last.

Simon blames himself for the destruction caused by Harvey.

The residents reel from the traumatic events. Leo breaks the news to David that had they had the sinkhole repaired sooner, the catastrophe of the previous evening would never have happened.

Dev struggles with his guilt.

More tragedy hits the street in the wake of a death.

Can Dev rebuild his family after the car crash decision?

Roy’s conscience starts to cause him problems.

Asha spots Stu wearing a Weatherfield County backpack. He reveals that he found it, but Asha is sure it is Corey’s from the night of the attack. She chases him but he gets away.

Asha and Nina resolve to track down Stu, aware that this could be their only chance to prove Corey guilty once and for all.

Emma fawns over Curtis, impressed with the way he went to people’s aid and knew exactly what to do. Curtis enjoys the flattery.

Furious residents confront David over the sinkhole. A shamefaced David admits that had they had the repairs done sooner, none of it would have happened.

When Curtis reveals that he has agreed to do another shift at the hospital this evening, Emma worries that he’s taking on too much.

Getting little joy from the police, Asha and Nina take a photo of Stu from the shop’s CCTV and show it to Billy, who confirms he is a regular at the soup kitchen.

Offering to help out at the soup kitchen in the hope of finding Stu, neither of the girls spot that he has heard every word.

With Alya out of the way, Zeedan takes the opportunity to launder some of Hashim’s cash through the Speed Daal till. Hashim meets up with Zeedan in the ginnel and, handing him another bag of cash, tells him he’s got a month to push it through the books. Zeedan’s heart sinks.

With equipment all wrecked from the night of the storm, a morose Ryan reckons his DJ career is over. When Alya offers him some shifts at Speed Daal, Ryan’s grateful.

As Zeedan launders Hashim’s cash through the Speed Daal till, Alya remains oblivious. As Ryan heads to Speed Daal, he notices Zeedan involved in a heated exchange with Hashim. When Ryan questions him, Zeedan refuses to be drawn, leaving Ryan suspicious.

In the salon flat, Curtis runs his hand through his hair and a clump falls out. When Curtis reveals that it’s another side effect of his illness, Emma is heartbroken for him. Emma confides in Steve how worried she is about Curtis’s condition and wonders if he’d lend her the money from Oliver’s fund to allow him to see a private consultant.

Steve gently explains that he can’t release Oliver’s funds for Curtis as people handed over their money in good faith and it would be illegal. Emma’s deflated.

Sean offers to help Asha and Nina find Stu by introducing them to his friend Carol. She suggests that they go and speak to some of the homeless people by the riverbank, but is furious when she sees them going through Stu’s belongings.

As Asha and Nina head home they spot Stu. Nina bites the bullet and tells Stu they need his help.

Nina explains to Stu how Corey’s backpack could prove he killed Seb. But Stu’s adamant he doesn’t want to get involved and hurries away, leaving the girls bitterly disappointed.

Nina takes Asha’s hand and tells her she’s ready to give their relationship another go if she’s willing to have her back. Asha’s thrilled.