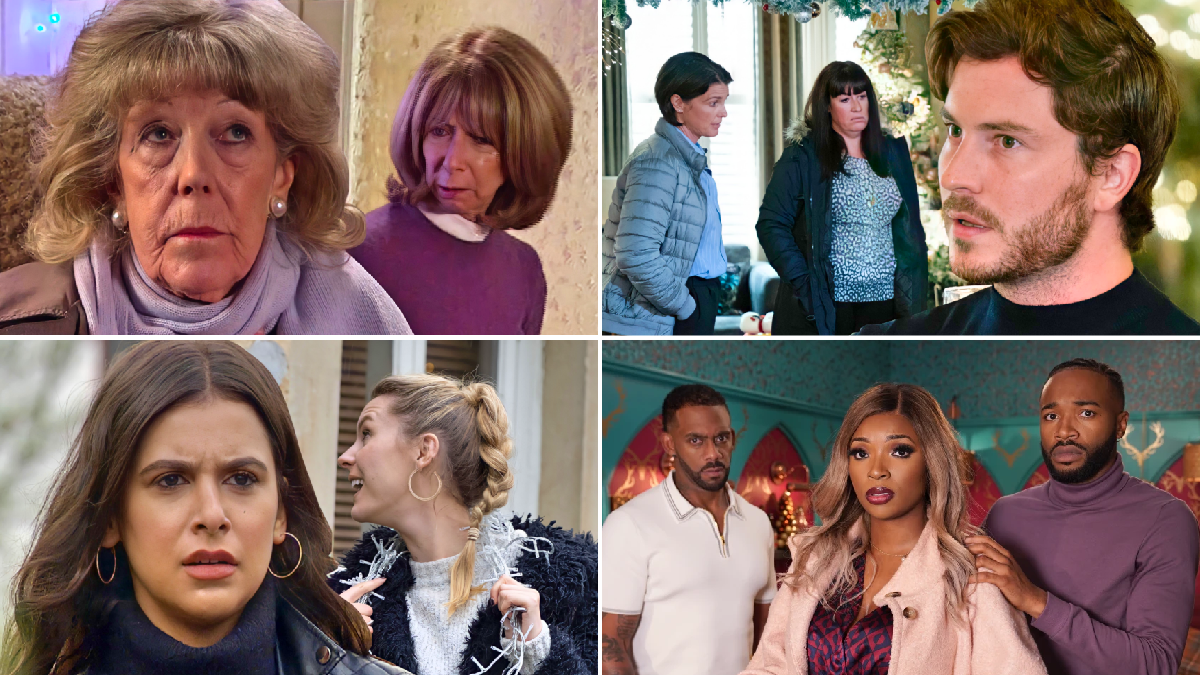 The festive season is almost here, but joy and happiness are nowhere to be seen in the land of soap!

Emma Brooker at last discovers the truth about Curtis Delamere in Coronation Street, while Audrey Roberts suffers yet another car accident.

EastEnders sees Gray Atkins made an interesting proposition, while Emmerdale’s Meena Jutla schemes to no end once again!

Hollyoaks, meanwhile, will see the aftermath of Lisa Loveday’s body being discovered, and shockwaves are felt!

If you’d like a little bit more information about what to expect in soapland next week, then we’ve got you covered.

Don’t say we don’t treat you!

1. After Ruby swallows one of Curtis’ pills, Emma takes her to the hospital, where she explains what happened. The doctor confirms Ruby’s fine as the pill was only a vitamin. Emma’s confused, and thus she demands answers from Curtis. Curtis at last admits he’s not dying, explaining how he first feigned illness when his parents were getting divorced, enjoyed the attention but once he’d started, he couldn’t stop. Emma orders Curtis to pack his bags, but she soon has a change of heart.

2. Emma accompanies Curtis to his appointment with the psychologist, and she listens as he explains how he spent years convincing people he was dying, enjoying the attention that it brought him. He reiterates that he wants to get better, telling Emma he loves her more than anything. Steve, meanwhile, hands Curtis his bank card and drunkenly asks him to transfer the £100k they raised to Oliver’s charity fund.

3. Summer tries to apologise to Daniel for what’s happened, but she’s hurt when he reveals he’s not allowed to talk to her. At school, Daniel is horrified to see the word ‘paedo’ scrawled across the board. Summer, meanwhile, feels frumpy. In a bid to cheer her up, Billy takes her out for a meal to the Bistro. But having eaten a burger, Summer feels guilty.

3. Sarah meets up with new pal Lydia, who brings along her her son, Finn. She introduces them to Adam, but Lydia pales and – alluding to the fact that she had a relationship with him at uni – makes her excuses and leaves. Under Sarah’s watchful eye, Adam admits his relationship with Lydia was years ago, explaining that he can’t really remember it. Sarah is not pleased!

5. Sally paints herself as a game-changer while speaking to a journalist, all the while belittling Maria’s cleaner air campaign. Maria, of course, is seething. Gary, however, reckons she should put herself up for election and give Sally a run for her money! Sally, horrified, tries her utmost to talk Maria out of her decision, but Maria has made her mind up. With the Q&A underway, Maria forces Sally to explain how she was imprisoned during her mayoral career. Feeling humiliated, Sally vows to beat Maria at her own game. Go Sal!

6. Zeedan is shocked by the arrival of his estranged wife Marrium. He convinces her that Hashim started the fire in the restaurant as an act of revenge. Afterwards, Marrium asks him for help. But with what?

7. Audrey arrives at No. 8, having had another car accident. She is, however, in denial about her eyesight. Gail convinces her to book an eye test, but Audrey is scared of losing her independence.

8. Sonia puts Rocky on a strict exercise plan. Her suspicions of Dotty increase after seeing her acting differently. Later, they both see Dotty so Rocky makes an excuse to leave Sonia and follows Dotty, realising she is meeting a drug dealer.

9. After the police search the car lot and find nothing, Janine tells Billy to plant the stolen jewellery in Jay’s belongings. As he is about to, Jay interrupts but Billy covers that he’s getting rid of the necklace.  He later lies to Janine that the job is done.

10. Aaron pressures his dad to question Dana about her converting to Islam. When he does, Dana assures Harvey she isn’t converting but it’s a possibility for the future. Later, Aaron meets up with Neil who is frustrated that Aaron isn’t doing enough for the ‘cause’.

11. Tiffany and Keegan argue in the middle of the market about their relationship, until Aaron leads her away. While getting Tiffany a drink, Aaron’s phone rings and when Tiffany goes to answer it, Aaron snaps at her for invading his privacy and grabs her arm. Liam enters and spots their tense exchange, as Tiffany warns Aaron not to speak to her again.

12. Ben and Callum eye up an attractive man in the market, and they later spot him again at the Prince Albert. Callum invites him for a drink, and – after getting to know each other – the conversation takes quite the turn!

13. Eve overhears Gray telling Ben about what happened with Chelsea and a prospective client. With Ben no longer wanting to give Gray clients, Eve offers her services, but Gray passes. However when Eve shows up with a client in need of representation and a lot of cash, Gray accepts and they begin working together. Whitney, meanwhile, speaks to Laura about Gray – but what will she find out?

14. Nancy asks about the grotto that Linda always organises. Mick firmly says that plan is off and Janine picks up that things are clearly fraught with Linda.

15. Meena’s delighted when she manages to convince Billy to let her move in for Christmas. Dawn, meanwhile, bumps into Billy at the shop. They smile sadly at one another before parting, evidently regretful over how things have turned out. Meena witnesses the exchange, but how will she react?

16. Priya goes to the hospital, and claims that her skin grafts are feeling better, desperate to stop the repeated trips. But she learns that her struggles with eating are slowing down the healing process. Afterwards, she makes an excuse to get out of the carol concert featuring Amba, but she soon regrets her decision, and thus heads to the village hall. However, it all becomes overwhelming for her, and she makes a quick exit – but leaves Amba behind!

17. Al agrees to Marlon’s Christmas drinks promotion, but it’s clear he has ulterior motives! Soon enough, he confirms that a mistake with the Christmas lunch promotion entitles diners to a free bottle of champagne, rather than the single glass that Marlon originally intended!

18. Kerry tries with all her might to persuade Mandy and Bernice to throw a salon Christmas party. Will she get her wish? That remains to be seen!

20. Lydia begins to wear out her welcome at Marlon and Rhona’s.

21. Toby knows the walls are closing in, and when a body is found in the woods, he’s certain that his time is up. Felix reckons everything will be okay given the lies he’s told, but little does he know what’s to come.

The body is identified as none other than Lisa, which forces Toby to make a drastic decision. But before he can act upon it, however, Celeste comes up with another course of action, throwing Mitchell under the bus! Martine receives the devastating news, but she refuses to believe that Mitchell is responsible for Lisa’s death.

22. Theresa flirts with Ali, but little does she know that someone is watching her, and they’re desperate to find out what she’s up to. Subsequent scenes will feature a voiceover from Misbah, who reveals that Theresa could be underestimating Ali. Verity, meanwhile, spots Theresa on a date with Ali, which leads Shaq to revealing what she’s up to.

23.  Maxine is desperate to free Warren, and thus she seeks help from Katja, one of Fergus’ former employees. Katja, however, wants nothing to do with Warren’s case! Maxine therefore attempts to guilt-trip her, hoping she’ll prevent an innocent man from being sent down for a crime he did not commit.

24. Determined to help her daughter through the heartbreak of recent events, Trish encourages Maxine to leave the village behind. Maxine ultimately takes her advice, and thus heads to the airport. The question is: will Warren succeed in stopping her before she takes flight?

25. Ste is heartbroken when he discovers that the hotel has terminated his cleaning contract.