Gabby Thomas (played by Rosie Bentham) has felt out of sorts recently on Emmerdale, with everyone around her getting into relationships while she has been left holding the baby after Jamie Tate (Alexander Lincoln) supposedly died last year. In upcoming scenes on the ITV soap, she will find herself gravitating towards one heartthrob of the village but she is unaware of his identity. This is where things could become complicated as it seems he is sleeping with two women at the same time, meaning Amelia Spencer (Daisy Campbell) and Charity Dingle (Emma Atkins) might not be the only ones who are pregnant.

The drama begins in next week’s episodes as Gabby starts using online dating apps to help her find the man of her dreams.

Having had very little success, she is ready to delete the apps but someone called Chris ends up messaging her, seemingly interested in Gabby.

When she agrees to go on a date with the mystery man, she is excited at the prospect of meeting this person who she has developed a connection with.

It later turns out the man she is going on a date with is newcomer and physiotherapist Kit (Thoren Ferguson), who is also dating her stepmother, Laurel Thomas (Charlotte Bellamy).

After the pair spent the night together, Gabby is shocked to find Laurel waiting for her in the kitchen of Home Farm. 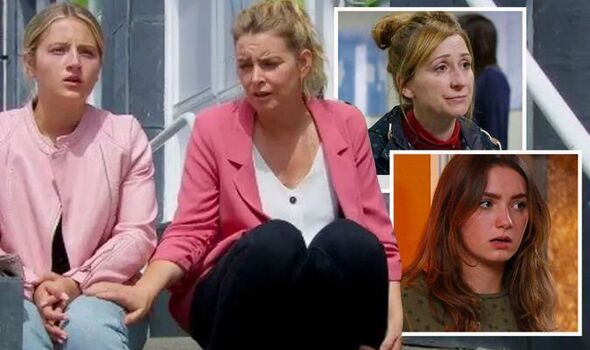 With Gabby ushering Laurel out of the property, Kit comes downstairs and has no idea the other woman he is sleeping with almost caught him with her stepdaughter.

Knowing full well what he is doing, Kit enjoys toying with both Gabby and Laurel as it seems the situation is working out just fine for him.

Realising Gabby’s spirits have been lifted by the new man in her life, Laurel is eager to meet the person putting a smile on her face.

She suggests they all go on a double date, still oblivious to the fact it would only be three of them on the date in question.

Later on, Laurel bumps into Kit in the shop and trying to lie his way through the situation, he explains he is going to cook for her. 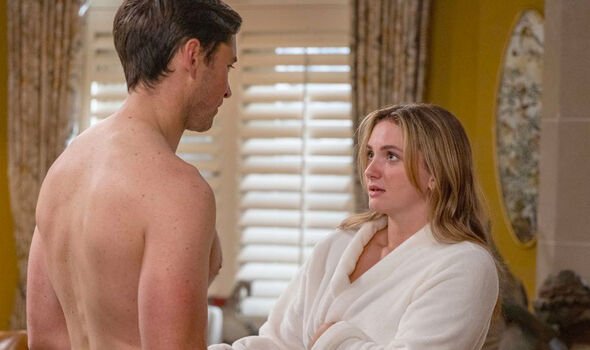 There will be a new baby

Laurel is delighted at the prospect of a man putting effort in but Kit has to send a message to Gabby for leaving her hanging as he was supposed to be cooking her dinner.

With his first meal of the night over with, Kit spends a little time relaxing with Laurel before she makes a move on him.

When things get steamy, she suggests they head upstairs and they may well do before he rushes out and heads to Home Farm.

Once with Gabby, Kit enjoys his second meal of the night and it is clear there is a bond between him and his bit on the side as they have a great conversation.

Also wanting to make the most of the romantic moment, Gabby suggests to Kit he heads upstairs so they can have some fun. 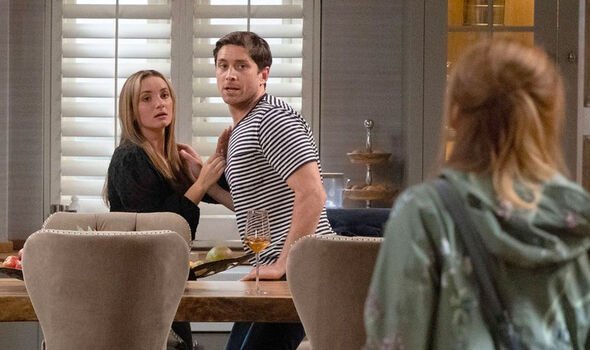 At this point, Laurel walks in and finds the pair together but what will happen when she realises she has been dating the same man as her stepdaughter?

Whether or not either woman continues a relationship with Kit might not matter as they could both have bigger problems on their hands.

It could emerge they are both suffering from the symptoms of morning sickness and when they both do a test, they could both realise they are pregnant.

Having only slept with Kit recently, they would come to the conclusion he is the father of their children.

This means they would join Amelia and Charity in the pregnancy club but will either woman want to continue with the pregnancy?

How well do you know your British soaps?

How many times has Ian Beale been married in EastEnders?

What is the name of Bianca Jackson and Ricky Butcher’s son on EastEnders?

On EastEnders in 2002, who accidentally ran Jamie Mitchell over in his car which caused his death?

How many times has Corrie’s Steve McDonald been married?

What happened to Emily Bishop in Coronation Street?

Who murdered Maxine Peacock in Coronation Street in 2003?

Which incident in 1993 killed off four characters in Emmerdale?

When did the show stop being known as Emmerdale Farm?

On what date did Hollyoaks air its first episode?

What was the name of the much-loved Coronation Street pet dog who was put down in April 2020 after 14 years?

1996 saw the arrival of one of Hollyoaks all time bad boys and rival of Kurt Benson, but who was he?

Who is the longest serving character on Coronation Street?

Who shot Phil in EastEnders?

How many fires have there been at Corrie’s Rovers Return?

Get out of my pub, you’re no soaps fan

Currently, there is a lot of confusion over Amelia and Charity’s pregnancy storylines, given both of them were a surprise.

Whereas Amelia is staying coy over the identity of the man who got her pregnant, Charity doesn’t seem to be completely on board with carrying on with her pregnancy.

It is Mackenzie Boyd (Lawrence Robb) who seems to have convinced her to give birth to her fifth child.

With another two pregnancies brought into the picture, it seems there could be a whole new generation of children born over the course of the next six or so months.

Executive producer, Jane Hudson, teased there would be at least one new arrival before the year is out.

The soap boss told Express.co.uk and other media: “There will be a new baby arriving in Emmerdale before the end of the year.

“I think that’s not giving anything away as there are so many female characters in the show, but there will be a new arrival before the year is out.

“There’s probably going to be a birth in the anniversary month perhaps! Babies in soaps are either born on programme celebrations or Christmas so there’s going to be one of those happening.”

Will Gabby and Laurel’s names be added to the ever-growing list?

Emmerdale airs weekdays at 7:30pm on ITV, with an hour-long episode airing on Thursdays.