There is a haunting, painful, and personal story at the center of “Euphoria,” as well as a haunting, painful, and affecting performance from its star, Zendaya. As 17-year-old Rue Bennett, the “Greatest Showman” and “K.C. Undercover” actor plays a teenager in crisis. Returning from a summer spent in rehab, after her younger sister found Rue covered in her own vomit from a nasty drug overdose — Rue is an addict, and a resilient one at that. Over the first four episodes, Rue repeatedly puts herself in dangerous situations, all in pursuit of the fleeting feeling of – not euphoria, but nothingness; an absence from the dreary existence that otherwise clouds her days.

Zendaya is exceptional at every turn. She adds heartbreaking levity to moments when her spiraling teenager feels invincible instead of fragile, and the way she carries herself, narrates each story, and generally handles the weight of leading a series are all as endearing as they are commanding. You feel for Rue and you’re surprised by her, which is no easy feat.

But the authenticity of her trauma is oft-overwhelmed by an onslaught of other painful stories. Like Rue, Sam Levinson’s HBO drama bites off more than it can chew — or, perhaps better put, it bites off more than its audience will be able to handle. In expanding beyond Rue’s arc to many of her troubled high school peers, “Euphoria’s” unflinching depiction of heavy, gut-churning adolescent events adds up to an exhausting, exasperating experience. For all his savvy transitions, propulsive pacing, and dynamic visual stylings, Levinson — who writes and directs the first four episodes — can’t escape the collective darkness at the center of each individual story. Separate, they’re distressing. Together, they’re horrifying.

Yet in an odd juxtaposition, “Euphoria” is primarily a love story. When Rue gets out of rehab, she soon meets a fast-friend and soon-to-be-crush, Jules (Hunter Schafer). A transgender girl who just moved to town, Jules carries her own baggage — namely, that she’s attracted to much older and overtly homophobic men — but she and Rue hit it off immediately. Each is trying to figure out who they are, and neither has had a simpatico partner-in-crime until now. 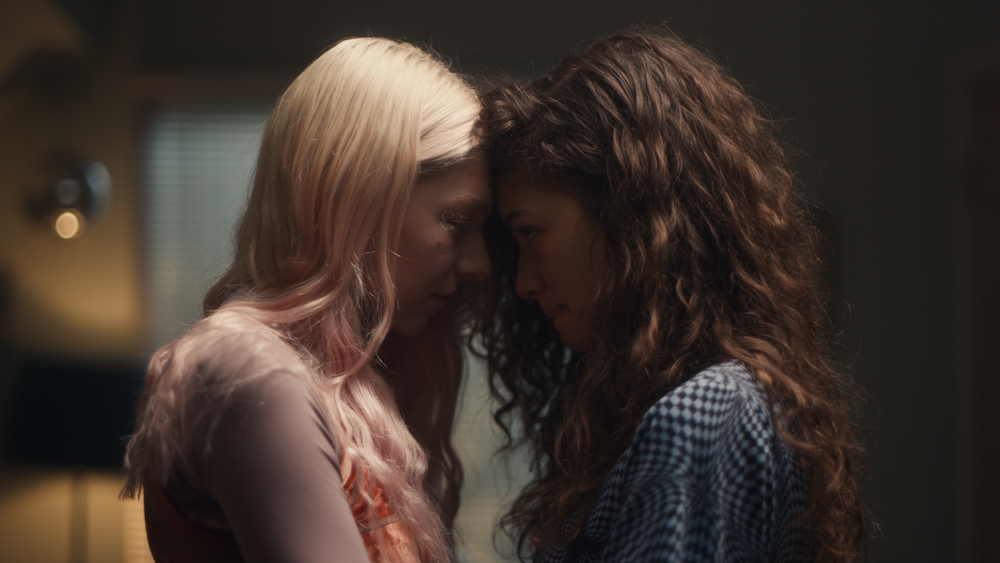 Hunter Schafer and Zendaya in “Euphoria”

Beyond their own understandable anxieties and mental roadblocks, the classmates they’ve failed to connect with also stand in their way. Towering above the pack is the conventional high school symbol of perfection: the star quarterback, Nate Jacobs (Jacob Elordi). Nate is popular. He’s tall, cut, and well-off. He’s the main fixture at parties, where he does what most male jocks do, whether they’re pressured to or otherwise: He drinks, flexes (often shirtless), and hooks up with the hottest girl he can find.

Usually, that means Maddy (Alexa Demie), Nate’s on- and off-again girlfriend, but their passionate “love” leads to equally passionate fights. You see, Nate isn’t exactly well-adjusted. His dark past has led him to an even darker present, and what he enjoys isn’t what he’s publicly known for; in short, he’s exemplary of the oblivious, self-obsessed, and problematic white male, only his issues go so far beyond typical toxicity. Nate’s backstory is outlined in the second episode, and Levinson follows this model throughout the first four hours: One character is introduced as a young child and developed via montage to explain how they ended up the teen they are today. Most of these stories range from jarring to appalling, whether past or present, and they do add up.

“Euphoria” hasn’t heard a sad story it can’t make worse. There are scenes you’ll wish you never saw, let alone reflect on. Statutory rape takes place in the first episode. An enormous older man masturbates via webcam in front of a teenage girl. Actually, multiple men expose themselves (and more) sans invitation, but it’s hard to keep track of how many when there’s one unsettling scene so soon after the last one. A trigger warning before each episode wouldn’t be uncalled for. 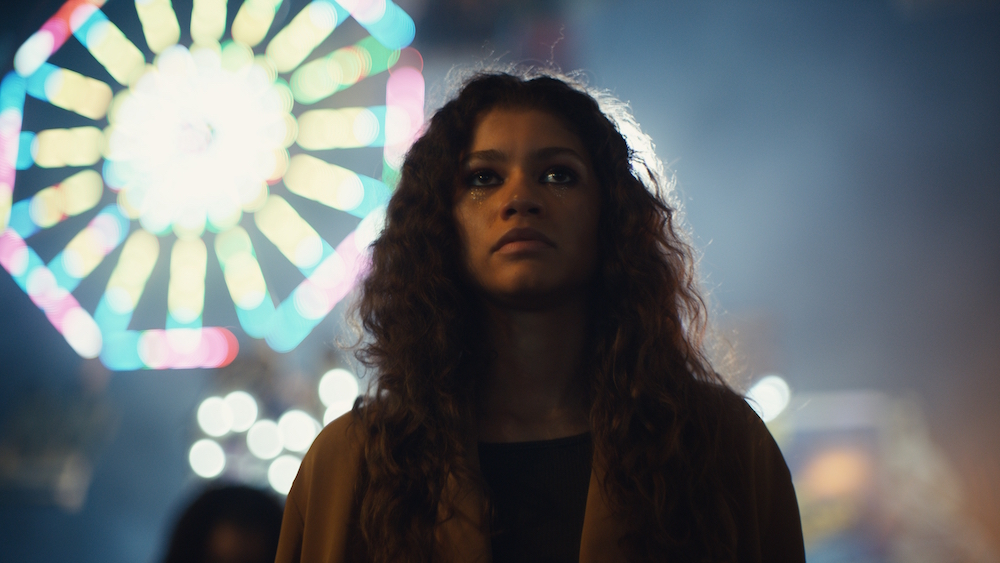 But each moment is meant to reflect someone’s truth. “Euphoria” is a teen drama that actually strives to be honest to a teen experience — they’re the worst teen experiences you can imagine, sure, but they’re far from impossible ones. Rather than the nighttime soaps populating The CW or outlandish comedies available on streaming, the HBO series grounds itself in stark reality. Remember how when you were 15, every flirtation or insult felt like life or death? That’s how it feels to watch “Euphoria,” though those kind of trivial matters aren’t really brought up.

For some, “Euphoria” will be an extremely unpleasant experience. For others, it may prove cathartic. Aesthetically, it’s extremely sharp. Levinson smoothly moves from subject to subject, event to event, with skillful touches scattered throughout. Never is his methodical pacing more apparent than in the fourth episode, as a series of one-shots takes you through a nighttime carnival. There’s a steady build to a crescendo, but the favorite adolescent setting doesn’t provide any cliched results. Levinson isn’t afraid of overt symbolism either — there’s even a scene when as soon as Jules bikes away from Rue, the bright and sunny day gives way to storm clouds and rain; Rue’s sunshine is gone, and all that’s left is her addiction.

Despite Levinson’s clear command over his storytelling aesthetic, Zendaya’s strong turn, and a rich authenticity driving each scene, viewers shouldn’t expect to enjoy the series, which is ultimately its biggest downfall. The best they can hope for is to feel something for these kids. With a little fine-tuning, “Euphoria” could put its unblinking vision to better use. A sense of humor and a glimpse of goodness can go a long way. As it stands, the severe darkness dulls the impact beyond blunt force trauma. There’s a connection to be made with Rue and her journey, but joy seems too far out of reach.