The Jeremy Vine panel was unimpressed after learning the judge in the Vardy v Rooney libel case had found against Rebekah Vardy. In a saga dubbed the Wagatha Christie case, Jamie Vardy’s wife sued Coleen Rooney for allegedly causing her “very serious harm to her reputation” after being accused of having leaked stories about the Rooneys to The Sun newspaper. Judge Justice Steyn said Rooney had successfully established that libel was “substantially true” and had demonstrated Vardy had leaked private information to the press.

The Vine panellists dismissed the lawsuit as a case of “footballer’s wives meet Mean Girls”, noting the whole situation could be summed up as a “waste of money.”

Ayesha Hazarika said: “Talk about shooting yourself not in the foot but in the face with it.

“Anybody with half a brain…you didn’t have to be Rumpole of the Bailey to look at this and be like, ‘Rebekah, babe, step away from this. This is not going to come out…’

“This was all grotesque, it was footballer’s wives meet Mean Girls.”

JUST IN: Angela Rayner’s boyfriend declares war on Starmer in brutal takedown of his leadership 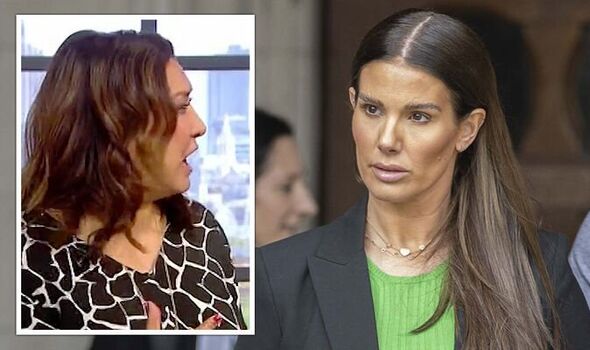 She continued: “The thing that is really interesting about this is, you know how sometimes we say, ‘if there were more women in positions of power, there wouldn’t be any wars?’

“Au contraire, absolutely. The thing I’m going to miss out the most is watching Wayne having his punishment carrying Coleen’s bags into court every day.”

In her ruling, Mrs Justice Steyn said there was “a degree of self-deception” on Rebekah Vardy’s part about her role in disclosing information.

She said: “Although significant parts of Mrs Vardy’s evidence were not credible, my assessment is that she is genuinely offended by the accusation made against her by Mrs (Coleen) Rooney in the reveal post.

“However, that is not because she was not involved in disclosing information from the private Instagram account: I have found that she was.

“Rather, her indignation at the accusation flows, in my judgment, from a combination of factors.

“Mrs Vardy’s part in disclosing information to The Sun was, it seems to me, unthinking rather than part of a considered and concerted business practice.

“Consequently, there has been a degree of self-deception on her part regarding the extent to which she was involved, as well as a degree of justified resentment at the exaggerated way in which her role has at times been presented during the litigation.”