HOLLY Willoughby was left in hysterics after accidentally sending This Morning viewers to a 'rude website'.

The telly presenter, 39, and co-host Phillip Schofield, 58, were in fits of laughter during a chat with the owners of the UK's largest pumpkin earlier today. 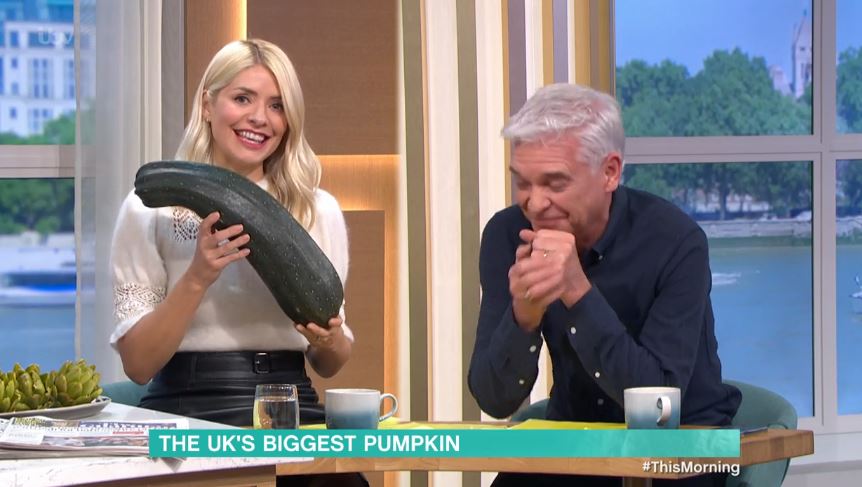 Brothers Ian and Stuart Paton, 59, from Lymington in Hampshire's New Forest National Park, told hosts of the ITV daytime television programme that they went onto a specific website which helped guide them get it to its huge weight of 185 stone.

Holly was very impressed with their gardening skills and quickly whipped out a huge marrow that was placed beside her in the studio.

She said: "I mean that's incredible is there a site called BigMarrows.com?

"Because I don't know whether you can see this, but David who is head of wardrobe here at This Morning created this monster. 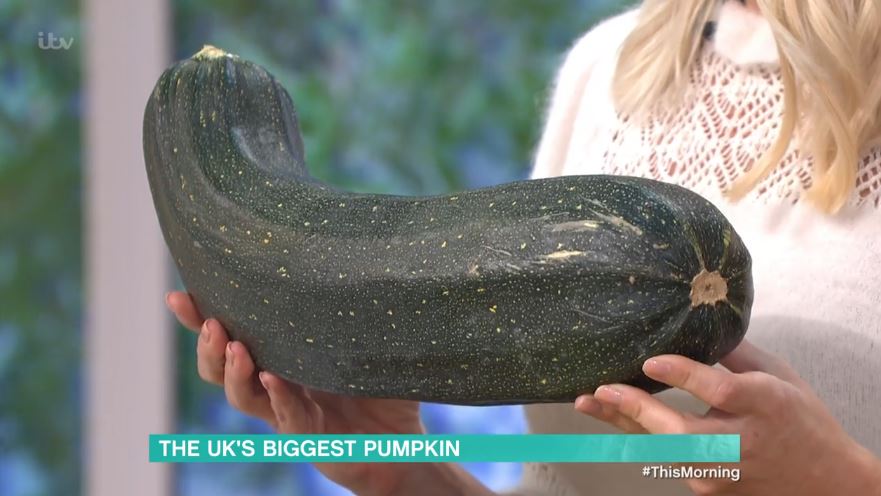 "I mean it's not quite as impressive as yours…"

Phil added: "Well it started off as a courgette!"

The blonde beauty continued: "It did start off as a courgette and it's quite on the large side.

"So in order to progress this to your sort of size, it's just water and love, really?" 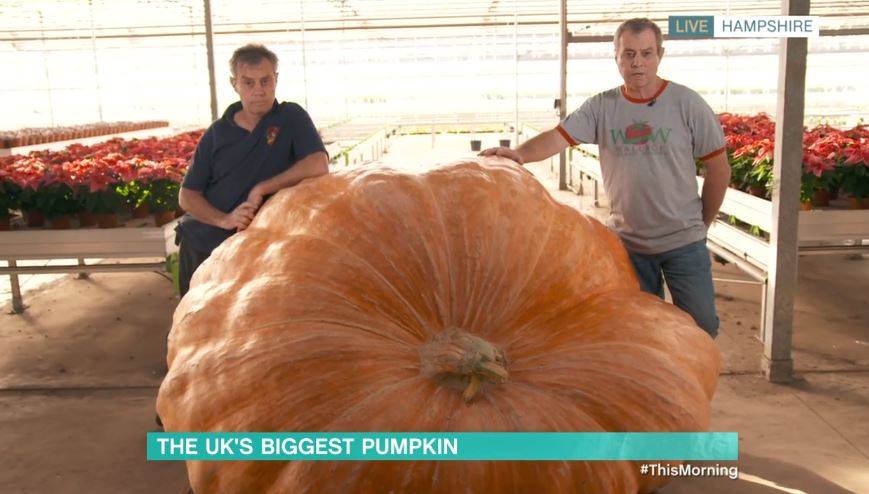 The brothers replied: "It's not exactly a cheap hobby for us and we do spend a lot of hours, we were spending about six hours a day between us for a couple of months and I was reminded of that several times by my better half."

They later went on to explain that they plan on giving three of their extremely large pumpkins to garden centres to be able to donate to the Giant Pumpkin's Commonwealth – who set up shows all around the world.

As they waved goodbye to their guests, Phillip giggled: "And also I think we should say really be very careful before you google Big Marrow.com…"

Many viewers took to Twitter to discuss the crazy antics that went on between the four as they discussed the size of Holly's marrow. 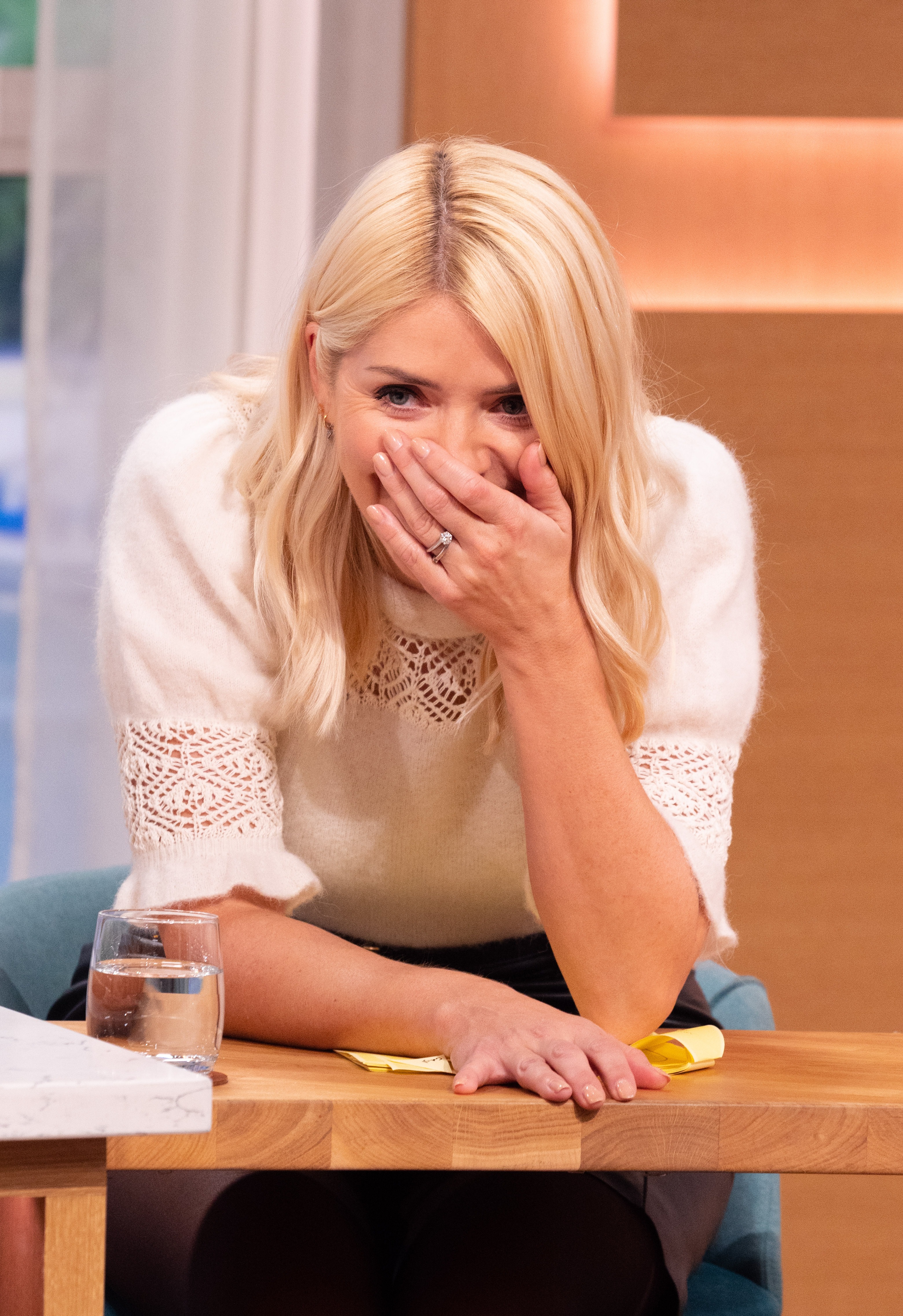 One wrote: "Just tuned in and I saw holly holding a big marrow , I dont want to know #thismorning"

Another said: "Love Halloween items on This Morning that is some pumpkin… huge!!! #[email protected]

Yesterday Holly was left in a fit of laughter when their stylist David O'Brien showed off his huge vegetable.

He told the stunned pair: "It's a courgette that time forgot and now it's a marrow."

As Phillip started to film David's marrow, he burst out laughing with Holly after being offered to take it home.

Holly shrieked: "I'm almost embarrassed to take it home in case I break down somewhere."

"Well I brought this on the train," David admitted.