[There are spoilers ahead for Emily in Paris season 2. Proceed with caution!]

Emily in Paris is back, baby! Once again, you can travel to the land of croissants (from the comfort of your home) and watch the titular Emily sometimes succeed in wearing a beret. But while Emily has her own thing(s) going on this season, the characters around her have even more interesting issues to contend with. Take Mindy, for example. During season 1, her storylines basically only revolved around Emily. But in season 2, she’s opening up about her issues with her dad and finding work (and love!) on her own.

Cosmopolitan hopped on the phone with Ashley Park , the actress who gives Mindy all her charm, to break down her favorite storylines of Emily in Paris season 2.

Cosmo: I want to start by asking about the storyline with Mindy’s father. She’s obviously so upset when she’s in Saint Tropez and learns he’s just been there. Why do you think that dynamic was important to explore this season?

It’s the catalyst for watching Mindy start to go on this journey of figuring out the woman that she’s going to be and what she wants to do with her life and her path.

I think that Mindy has a huge, huge heart, and she is not an angry person or a bitter person. Very similar to me, I don’t think I can go to sleep at night if I think somebody is angry at me or if I have bad blood with somebody. I think she loves her family. Maybe she needed to have an adventure of her own.

Totally, and sometimes we run away from that and then we find our way back. She finds out about her dad and then it’s not until very later on she opens up about it, and that’s super realistic. You can be super social and super private, and she doesn’t want to burden anyone with anything. Oftentimes people will work through stuff on their own before they’re able to open up about it. And I’m so happy we see a lot of what Mindy goes through and also some flaws and some unfair shortcomings this season as well.

A big plot line for your character this season is when her bandmate connects her to her past. How do you think Mindy will handle it when more people figure out who she is? It feels inevitable at this point.

Before Emily, I think Mindy had hundreds and hundreds of new friends in Paris. It’s very easy to hide parts of your identity, or be who you want to be, when you don’t know people very well and you haven’t really let them into your heart and your home. So I don’t know, that’s really interesting. That’s the first time I’ve thought about that.

Speaking of the band, that’s an original song you sing in the finale, right? Tell me about working on that.

About halfway through the season, Darren [Star, the showrunner] came to me he was like, ‘What if we did an original song?’ And I was like, ‘That’s an amazing idea. I’m not a songwriter, though.’ And so I asked my friend Freddy Wexler. I don’t think I’ve ever had a pop song or a song written for me to sing, or a character of mine to sing, but that was fully written throughout us filming season 2, over Zoom.

We had a lot of meetings about it because we didn’t want to just to be like, some fun pop song. We wanted it to really enhance the story and the characters and propel it forward, and I think it does such a beautiful job of that.

We really get to see your character cultivate her own group of friends this season. What was your reaction when you first saw that in the scripts?

Oh my God, I was so excited. When Jin Xuan Mao and Kevin Dias were cast, from the first table read the chemistry was so there, and we all got along so well. Jin was born in China and then came and lived in France, and Kevin is Portuguese and lives in France, and it really feels like there is an energy of this melting pot of what Paris is. 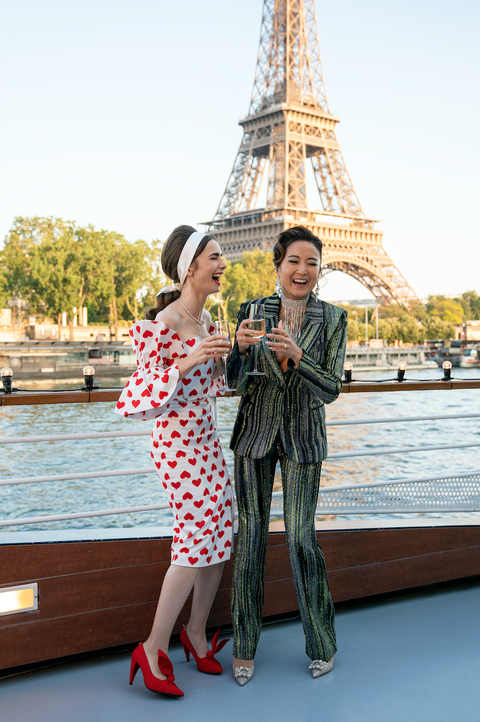 How do you think that storyline allowed your character to grow? Mindy really has her own narrative this season.

We get to see very different aspects of her, different facets of her, whether it be insecurity or vulnerability, and we see a lot more of her internal life. And also, her put in situations where she’s kind of thrown off. In the first season, it’s a lot of her guiding Emily through trying to adjust to situations where she doesn’t know what to do. It lends to great humor and also great heart when we see Mindy be thrown into these kinds of situations as well.

If you guys get a third season, what are your hopes for Mindy?

I loved getting to film outside of Paris. It’d be fun if Emily and Mindy got to go on a trip somewhere again. But I really trust the writers. They really have gotten to know us so well as people and they understand the characters so well, too. I just really hope that we keep going with the complicated stuff, and the fun twists and turns.