EXCLUSIVE: You could tell from Sacha Baron Cohen’s 2019 ADL speech and his just published Time Magazine guest column that an edgy criticism of social media platforms Facebook and Twitter for allowing Holocaust deniers free run was going to be a major thrust of the promotional appearances he is about to start making for the Borat sequel that Amazon premieres October 23. It will be an evolving discussion, because of an abrupt about face from Mark Zuckerberg’s Facebook platform to ban Holocaust denial messaging from its platform, with Twitter following with its own ban shortly after. 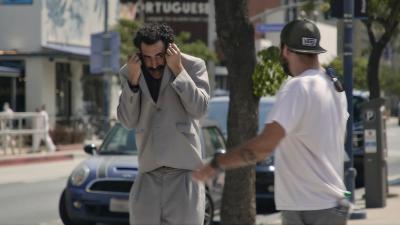 The topic will still be top of mind for Baron Cohen, who delivered a blistering speech against Facebook and Twitter and the impact of allowing deniers of the Holocaust a free pass to spew anti-Semitic information under the guise of free speech. Sources said that while the new movie satirizes anti-Semitism in the equally edgy fashion used by Taika Waititi in Jo Jo Rabbit, the Borat followup illuminates this hatred for a specific constructive reason near to his heart.

A surprise byproduct of all this is a lawsuit filed in Georgia. Reports say it was from the estate of Judith Dim Evans, who appears in the film and who bears witness to the atrocities of the Holocaust, during which her family members were killed. The suit claims Evans participated not knowing she was in a satire, one the suit claims was done to “mock the Holocaust and Jewish culture.” While the lawsuit might well reverberate in the press, sources close to the filmmakers tell me that there might well be a change of heart after the movie is seen because the whole point of including Dim Evans was to do exactly the opposite. And she was clued in on the gag after it was shot and there is footage of it.

Baron Cohen dedicates the movie to Evans, who died after filming. I’m told that he for the first time while making one of his movies where most everyone but him is an unwitting participant, out of respect he had someone tell Evans and the friend who shares the scene with her, that Baron Cohen was himself Jewish and playing an ignorant character as a means of Holocaust education, by featuring a Holocaust survivor who ends up challenging the anti-Semite by charmingly telling her own story. The filmmakers separately helped other family members of Ms Evans to create a website in her honor, and I’ve heard that Baron Cohen and Amazon Prime created a way through its X-Ray bonus content for viewers of the film to hear Evans tell the story of what happened to her family during WWII.

Whether the timing of Facebook and Twitter’s Holocaust denier ban had anything to do with Baron Cohen’s plans to vilify them in public appearances that start tomorrow, Anti-Defamation League CEO Jonathan Greenblatt told Deadline that Baron Cohen’s relentless efforts to shine a light on the practice, both onscreen and in public appearances, has helped keep the pressure on sites that are being more closely scrutinized than ever in election season.

“We closely track anti-Semitic incidents and law year saw the highest total’s we’ve seen in the four decades we’ve been doing this work,” Greenblatt said. “I wish they had done this ban sooner, but I’m glad they have and we will follow up to make sure they keep their word. Sacha’s evangelism and his follow through, I’m certain it was helpful. It kept the issue in the public eye.”