Directed by Matt Reeves (Planet of the Apes), The Batman – set for release in 2021 – is believed to center on the character's formative years. And by choosing Pattinson, the studio spurred a long tradition of debate and complaint among fans.

True to form, the announcement immediately prompted some sharp social media responses, which ranged from "Wow, horrible!! DC comics swings and misses again" to "Have you seen him in anything not named Twilight? Because dude has real chops." 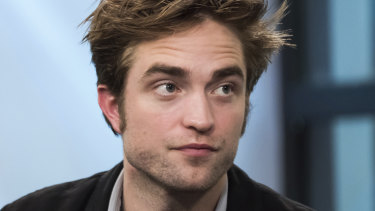 The actor has built an impressive resume since exiting the Twilight Saga in 2012, which capped a $US3.3 billion ($4.7 billion) franchise. Choosing smaller films, he has won critical acclaim for such movies as The Rover, The Lost City of Z and Good Time, and has been winning early praise for his new film, The Lighthouse, opposite Willem Dafoe.

He's also choosing fascinating directors to work with, including David Cronenberg (on Maps to the Stars) and Dark Knight Trilogy filmmaker Christopher Nolan (on next year's Tenet), who knows a thing or two about casting talented, young, brooding actors.

As recently as 2016, Affleck hoped to star in and direct a solo Batman film, but that was before the critical drubbing of Justice League and Suicide Squad, and before the box-office underperformance of Batman v Superman: Dawn of Justice had fully played out.

That all works in Pattinson's favour. The so-called "Bat-fleck" Era has temporarily lowered some of the expectations for the role – while also increasing the craving for one of Batman's most intriguing facets: revelations of his weirdness.

Although Affleck had the bulk and square jaw to physically become the Gotham City superhero, he often resonated as too vanilla to be believably dark. Pattinson, by contrast, has shown he can credibly inhabit shadowy layers of intrigue.

Pattinson has shown he can credibly inhabit shadowy layers of intrigue.

That doesn't mean that Pattinson lacks his detractors and skeptics. But it's notable that his Batman casting is being announced close to the 30th anniversary of Tim Burton's Batman – a breakthrough achievement that birthed a nearly $US5 billion movie franchise. One of the most memorable feats of that film was how star Michael Keaton won over hordes of pre-release haters.

When Keaton – best known for the warmhearted comedy Mr. Mom at the time – was announced in the late '80s as the actor to play Batman, comics fans registered their unmasked disgust. In a time before social media, the debate roared in comic-book shops and industry publications, and more than 50,000 people signed petitions to protest the casting.

After the film set records at the box office, however, it was Keaton – and not Jack Nicholson's Joker – who got the last laugh. And part of Keaton's strength, despite his slight build, was his ability to play a dark, kinetic oddball.

And that's right where Pattinson slides in. Many film fans might spew vitriol over each James Bond or Star Wars casting announcement, but even they are well aware of the great Keaton Overreaction of '88 – and must wonder whether Pattinson might actually have the acting gift to (in Keaton's words) "get nuts".

The latest entry in the franchise could well reveal Pattinson as a tormented, and thus compelling, Batman. Perhaps nothing has professionally rankled and motivated Pattinson more than waiting for the opportunity to prove that Twilight has turned to Dark Knightfall – and that Edward Cullen disappeared over the actor's horizon long ago.