[This post contains spoilers for “Chapter Ninety-Three” of Jane the Virgin.]

Is Jane and Rafael’s relationship breaking anyone else’s brain? There’s no way I’m alone in this. Although they’ve been on and off for almost every season of Jane the Virgin, the past few episodes have been particularly rough. As of this week, it really looks like they’re back together for good (I mean, there was even a musical number)! But this is a telenovela with eight episodes left, so we probably have at least a million more plot twists left before the story ends.

There is one tiny detail from last night that might completely give away the ending of the show though. Did you happen to notice what Jane was wearing when Rafael said he loves her and wants to move in together? It was a yellow dress, which is an Easter egg that Jane the Virgin writers totally dropped in on purpose.

jane + wearing a yellow dress in a decisive moment of her relationship with rafael? okay i see you #janethevirgin https://t.co/94rX2Fwmqk https://t.co/udvApY05FS pic.twitter.com/vzFCyMsAPb

Before the final season premiered, creator Jennie Snyder Urman told viewers to keep an eye out for a yellow dress callout. It’s one of the details that have been intentionally written in to show “things coming full circle,” and “how much these characters have grown and learned and changed.” Uh…so what does that mean?

Do you remember the last time we saw Jane rocking yellow? In the season five premiere, Jane wore a yellow dress to visit Rafael on the first day of his new job to tell him that she wanted to stay together despite Michael’s return from the dead. (Casual.) 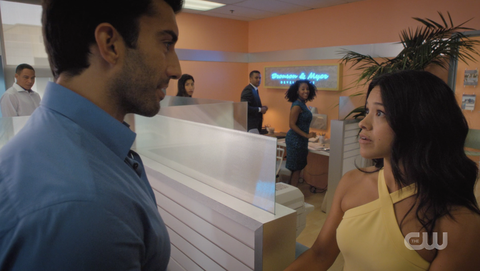 THAT yellow dress moment was significant because it was a callback to a really similar scene with Michael in the very first episode of JTV season one. Jane wore yellow to visit Michael at work to tell him that she loved him. 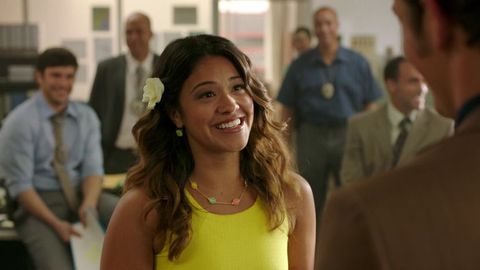 In the first two yellow dress moments, Jane tells Michael and then Rafael, that even though she’s confused about her life, she knows she wants to be with them. In this week’s yellow dress moment, Rafael is actually the one who interrupts Jane’s day to profess his love for her. Sure, it’s a little bit different, but it’s the same message. If the dress is really a sign that this thing is coming full circle, it’s definitely a confirmation that Jane and Rafael are going to live happily ever after, right?

Of course, if you’re a glass-half-empty kind of person, you could always make the argument that the yellow dress moments mean something bad. The first two showed Jane in a position where she thought she was making a final decision, and then was hit with a plot twist right after. There are still eight episodes left of the series…so who knows what will happen to Jane and Raf?