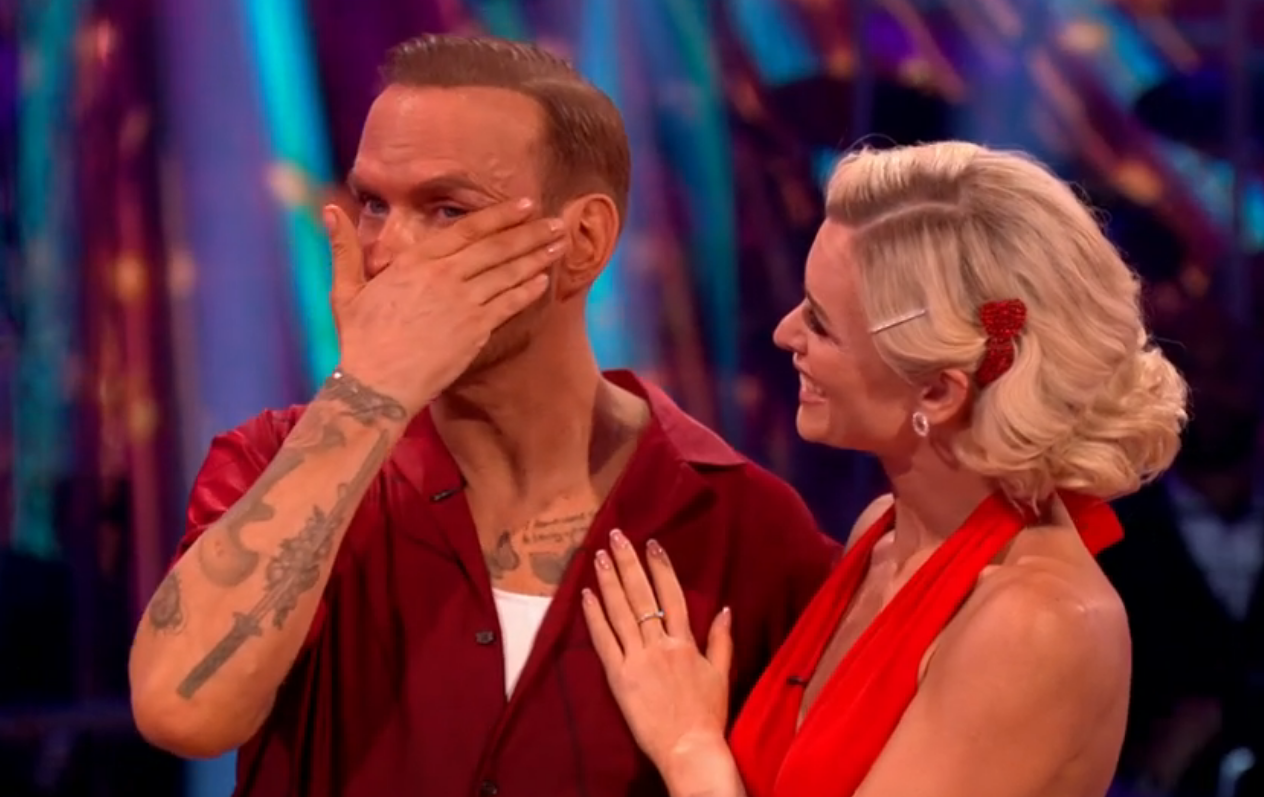 Strictly Come Dancing star Matt Goss wiped away tears after becoming the third celebrity to be eliminated from the show following the dreaded dance-off.

The Bros frontman, who was partnered with Nadiya Bychkova, was voted out of the BBC One competition show after performing against Kym Marsh and her pro partner Graziano Di Prima.

Asked about his time on the show, Matt said: ‘It’s an extraordinary experience, I have been in America for 25 years. Thank you judges for your candour, you’ve helped me in many ways, my posture – Anton, I am more aware of it.

‘This lovely lady beside me, a world champion with all the patience. I am very honoured to have danced with you, and everyone who is still in, I love you guys, go smash it guys.’

Nadiya said of her partner: ‘First I’m so grateful that I got to teach and dance with a music icon. But, more important than this, I got the privilege to get to know Matt, for who you really are. Not many people know you and you’re a beautiful soul, very kind human and a real gentleman.’

It was at this point that Matt became visibly emotional and started to blot away his tears.

‘I’m an emotional person,’ he admitted. ‘I wish my mum was here and my sister was here, but you really have the British public who have made me feel really welcome. Thank you for welcoming me back after 25 years.’

Matt lost his mother Carol to cancer in 2014. His sister, Carolyn, died in a tragic car accident in 1988.

Viewers were in pieces over Matt’s exit, with one fan writing: ‘Feel a little sad Matt Goss is going. He’s obviously shy and has been through a lot so it would have been nice to see him come out of his shell a bit more.’

Echoing a similar sentiment, another said: ‘Oh Matt .. you’ve made me cry. What a lovely guy.’

Matt and Kym performed their routines again in a bid to impress the judges, with Matt and Nadiya taking on the Jive to Paul McCartney’s All Shook Up, while Kym and Graziano performed their heir Samba to Volare by the Gipsy Kings.

Afterwards, the judges voted on which couple they wanted to save, with all of them opting for Kym and Graziano.

Craig Revel Horwood said: ‘I think both couples went up a major notch, I mean Matt you went fantastically mad in that, I loved it, and Kym you were really great in that. But the couple I would like to save is Kym and Graziano.’

Motsi Mabuse added: ‘From that dance off only, I have decided to save Kym and Graziano.’

The three votes meant that Kym and Graziano were safe and that Matt and Nadiya would be leaving the competition. When Shirley Ballas was asked who she would have saved, she also said Kym and Graziano.

Previously eliminated from the competition have been Kaye Adams and Richie Anderson.

While Matt has also found the experience challenging, he recently opened up about how it’s helped him with a condition he’s had since birth.

The 54-year-old was born with Poland syndrome, a ‘very rare’ condition that is characterised by webbing of the fingers and of underdevelopment of chest muscle, according to the NHS.

Matt explained he has ‘one pectoral muscle on the right side instead of two. The lower one is missing but the upper one is fine and strong.’

During his career as a frontman, Matt said that he used to ‘pose covering that side of my chest’ but now has plans to reshoot campaigns following Strictly Come Dancing.

Speaking to the Daily Mail, Matt said: ‘My posture has improved since being on Strictly.

‘I want to say to the judges, you’ve made me want to improve this and be proud of my posture. I want to thank them. This is a journey for me – every week I am getting stronger.’

Strictly Come Dancing continues Saturday at 6:40pm on BBC One.