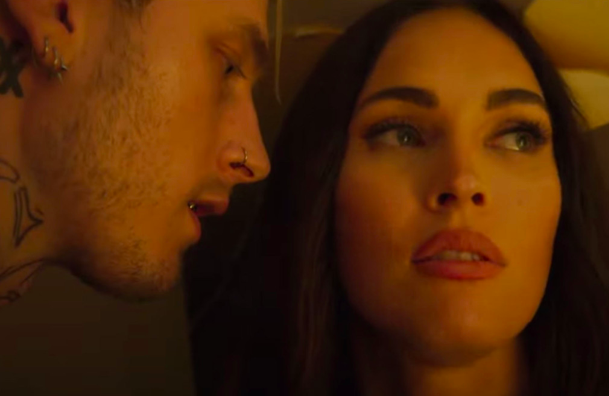 Megan Fox and Machine Gun Kelly’s love story may have started when they met on the set of Midnight in the Switchgrass, but the film is far from a rom-com.

The first trailer for the thriller has been released, and Megan is seen punching her beau’s character in the face and holding a gun to his head.

In one scene in the trailer, shared by Entertainment Tonight, Lombardi goes undercover to act as ‘bait’ for a pimp played by MGK – credited under his real name Colson Baker.

After the man pulls a knife on Lombardi, she fights back and punches him in the face, before pulling a gun on him to question him about a suspected serial killer.

Things go from bad to worse for Lombardi, though, as she is abducted by their target and her life is left hanging in the balance, with her partner Helter and Texas Ranger Byron Crawford (Emile Hirsch) given just hours to find her.

Midnight in the Switchgrass, directed by Randall Emmett, is based on the story of the Truck Stop Killer, real name Robert Rhoades, who is serving a life sentence without parole after being convicted of three murders.

Rhoades is suspected of torturing, raping and killing more than 50 women between 1975 and 1990.

That May, Megan confirmed that she had separated from her husband of 10 years Brian Austin Green, and rumours began swirling about her relationship with the rocker.

The Transformers actress then starred as MGK’s love interest in his video for Bloody Valentine, and they soon went public with their romance.

One year on, the couple are going strong, stealing the spotlight on every red carpet they walk and even wearing vials of each other’s blood around their necks.

‘Instead of a soul mate, a twin flame is actually where a soul has ascended into a high enough level that it can be split into two different bodies at the same time. So we’re actually two halves of the same soul, I think. And I said that to him almost immediately, because I felt it right away.

‘I think it was the second day [of filming]. I asked him to come into my trailer for lunch, and I put him through all of this astrology stuff. I went deep right away. I knew before I even did his chart, I said to him, he has a Pisces moon. I could tell by his energy.’

Midnight in the Switchgrass is set for release on July 23.