Michelle Heaton’s doctor has revealed how ‘terrible’ her physical state became while she was suffering from alcohol addiction in lockdown, saying that he doesn’t know ‘how she was still alive’ at the time.

Earlier this month, the former Liberty X singer appeared on Lorraine, where she apologised to Lorraine Kelly for drinking before making appearances on the ITV programme in the past.

Michelle, 42, told Lorraine, 61, at the time: ‘I love you so much because you’ve always been there to support me and I want to say I’m sorry.’

In a new video filmed for Lorraine, Michelle spoke to Dr Niall Campbell, a consultant psychiatrist at The Priory, a rehab clinic that she checked into after spending months in lockdown drinking alcohol every day.

During their conversation, which was shown on Lorraine on Monday, Michelle asked the doctor ‘how bad’ she was when he first met her.

‘You’d always been a bit of a drinker, and that was worse after your terrible time with your hysterectomy in 2014. Wine, prosecco, vodka, brandy, and then you said you started to use a bit more coke,’ he responded. 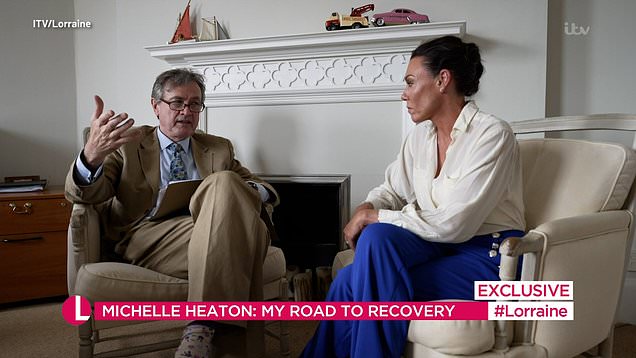 Dr Niall continued, explaining that this time last year, Michelle was ‘in a terrible state physically’.

‘I don’t quite know how you were still alive,’ he said.

‘Your liver function test was terrible. You had alcoholic hepatitis, you were heading towards cirrhosis, that’s permanent. And one of the enzymes that we measured, gamma GT, should be about 50. Yours was 2,053.’

The psychiatrist also outlined how Michelle was struggling mentally, as she was feeling ‘guilty, ashamed, depressed’ and experiencing ‘blackouts’, which she said she has ‘no recollection’ of.

Michelle recently shared a side-by-side picture on social media showing what she looked like 20 weeks ago compared to the present day to demonstrate how much progress she has made.

In her caption, she wrote: ‘This picture is not to shock, it WAS my reality! 20 weeks ago this was me – Ruined – immune system was shutting down. The second is me today – Saved – strong happy healthy

‘It’s National Sober Day And it encourages us to celebrate Sober life and bring awareness to addiction.’

Lorraine airs weekdays at 9am on ITV.

Frank offers confidential advice about drugs and addiction (email [email protected], message 82111 or call 0300 123 6600) or the NHS has information about getting help.

Adfam has local groups for families affected by drugs and alcohol and DrugFam offers phone and email support to people affected by other people’s drug or alcohol misuse.