Last August Hulu released the first season of “Only Murders in the Building,” a whodunit that blended old-school detective storytelling with fresh characters expertly played by Steve Martin, Martin Short, and Selena Gomez. The first season had a lot to recommend. The camaraderie between the trio of leads was infectious, with each individualizing themselves so well that viewers could be a Mab-iac or a Putnut depending on which character one loved the most. It also had some incredibly sharp writing that led to a bevy of one-liners, not to mention one of the best episodes of television of the year (“The Boy From 6B”).

With Season 2 set to arrive at the end of this month it’s time for a quick refresher on what happened last season. Who was at the heart of the central mystery? And was the Arconia murderer ever caught? We have you covered as we answer every burning Q you need to remember from Season 1 of “Only Murders in the Building.”

1. What Is the Title in Reference To?

“Only Murders in the Building” refers to the name of the podcast started by Arconia, the New York building of the title, residents Charles Haden-Savage (Martin), Oliver Putnam (Short), and Mabel Mora (Gomez). At the start of the series the three are down-on-their-luck in different ways. Charles was a once-successful actor — playing the former detective Brazzos on a now-defunct television series — while Oliver is an unlucky theater producer set to be evicted from the Arconia. Mabel has been a visitor to the Arconia since birth, staying with her aunt but feeling isolated from everyone else.

When another Arconia dweller, Tim Kono (Julian Cihi), is murdered, it causes Mabel, Charles, and Oliver to come together — using their love of true crime podcasts — and solve Tim’s murder while making a name for themselves. Mabel eventually reveals that her and Tim used to know each other, meeting as children, but grew apart after their mutual friend Zoe (Olivia Reis) fell off the Arconia roof. Though Tim knew more about Zoe’s death, he allowed him and Mabel’s other friend, Oscar (Aaron Dominguez), to take the fall.

The success of the Only Murders podcast puts Mabel, Charles, and Oliver on the map, amassing them a group of fans who sit outside the Arconia and eventually help the trio solve Tim’s murder.

2. Who Is Teddy Dimas and Why Is He Relevant?

Played by Nathan Lane, Teddy Dimas is an old friend of Oliver’s who lives in apartment 6B of the Arconia. He’s financially supported Oliver’s plays in the past and agrees to have his company, Dimas Dips, sponsor the Only Murders podcast. The trio, however, believe Teddy might be a suspect in Tim Kono’s murder. They eventually discover that Teddy’s son, Theo (James Caverly), who is deaf, has been stealing jewelery off dead bodies from a funeral home he works at.

In a flashback, the audience learns Theo and Zoe had a special friendship, with Theo harboring a crush on her. When Zoe takes a ring Theo has stolen, Teddy demands his son get it back. The subsequent argument between Zoe and Theo culminates with Theo accidentally pushing Zoe off the roof. Tim witnesses the accident but Teddy threatens to harm Mabel if Tim doesn’t keep quiet. Teddy and Theo are eventually arrested for their crimes by the end of the season. 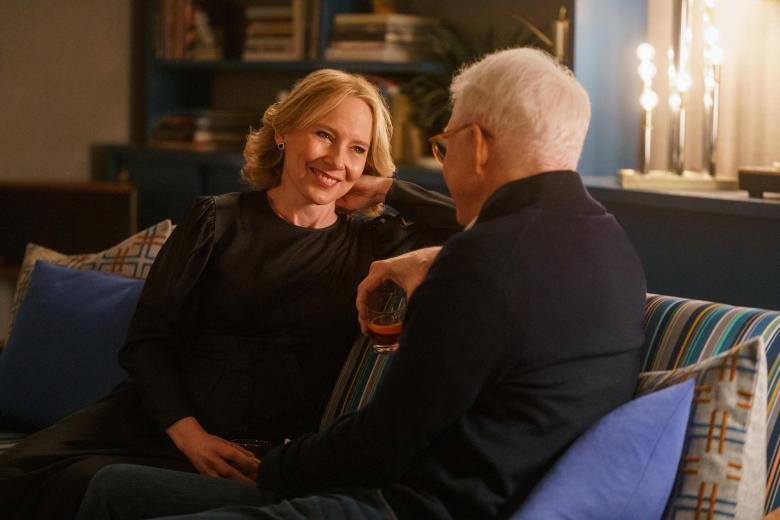 “Only Murders in the Building”

The central question at the center of Season 1 brought us back to our central trio. After discovering that Kono was poisoned Mabel and Oliver learn that Charles’s girlfriend, Jan (Amy Ryan), is the murderer. It’s revealed that Jan and Tim were in a relationship but when Tim dumped her she decided to poison him. She also poisons Charles as the podcast is soon to show she’s the murderer and prepares to blow up the Arconia. But the trio end up stopping Jan, leading to her arrest.

4. What Happened in the Season 1 Finale?

Though Mabel, Charles, and Oliver have been threatened with eviction due to Oliver’s unpaid bills and the attention brought to the Arconia from the podcast, Jan’s arrest proves that they are heroes. They prepare to celebrate the capture of the killer with a champagne toast on the roof. Running out of champagne, Mabel goes back down to her apartment. Charles and Oliver get an anonymous text asking them to leave the building immediately so they go in search of Mabel. They arrive at her apartment to find her covered in blood leaning over the dead body of Arconia owner Bunny (Jayne Houdyshell). The three are then led out in handcuffs.

The arrest of the three leads podcast competitor Cinda Canning (Tina Fey) to craft a companion show, titled Only Murderers in the Building.

5. When Does Season 2 Premiere?

Watch the full trailer for Season 2 of “Only Murders in the Building” below, and read IndieWire’s review of Season 2 here.