It’s usually easy to ascertain what tone a show is planning to strike. Then there are shows like Amazon Prime Video’s “Outer Range” which already sells itself as a genre mash-up and yet still leaves audiences asking, “Wait, is it supposed to be funny?”

Created by Brian Watkins, “Outer Range” is best summed up as a series for those who have watched “Yellowstone” on Paramount+ and said, “It’s good, but I wish it had more of a ‘Lost’ vibe.” If you’re thinking that sounds weird, you’d be right. The actors, for the most part, try their hardest to strike at whatever they think their character arc is, with Josh Brolin being the standout, but it’s doubtful most will stick around to figure out what the hell this show actually is about.

Royal Abbott (Brolin) is a Wyoming rancher whose family has lived on the land where their ranch sits for generations. When rival rancher/neighbor Wayne Tillerson (Will Patton) demands part of the Abbott’s land, a series of events ends in tragedy. And that’s not even mentioning the massive black hole swirling around in the center of one of Abbott’s fields.

A hole in the center of his field, you ask? It’s the puzzle box at the center of “Outer Range” that fights for prominence alongside the typical Western elements you’ve come to expect such as land disputes, power plays, and horseback riding. The problem is with such a science-fiction element involved it often leaves the Western drama feeling like an afterthought. The main narrative pull for Abbott’s family and the other characters who don’t know about the hole involves the murder of one of Wayne’s sons and how it involves Abbott’s boys, Perry and Rhett (Tom Pelphrey and Lewis Pullman, respectively).

So, on the one hand you have the Western, a reliable genre that’s received a shot in the arm thanks to Kevin Costner and the Dutton family over at Paramount. But if fans want something similar to that they’re out of luck. Sure, Brolin and Patton can play grizzled cowboys with the best of them, and though they don’t share a lot of screentime they’re compelling to watch. But the stakes of who will take the Abbott ranch never feel pressing because the question of “what is the hole” swallows everything up. Who can think about redrawing the land lines in the 1800s when there might be a time travel portal nearby? 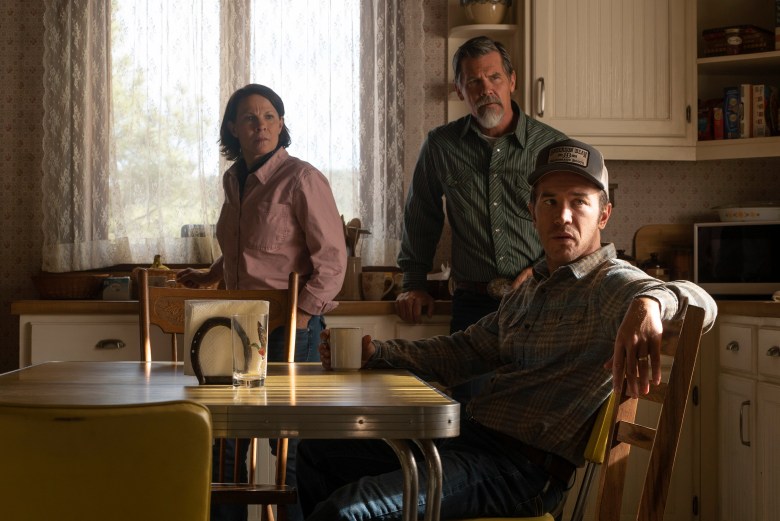 Josh Brolin has an Oscar nomination to his name, so it’s unsurprising that he is the MVP of this series. Whatever weird plot point the series throws at him, Brolin rolls with it. Whether he’s menacingly growling to a man that there “aren’t any Fritos” in hell, riding a horse, or showing vulnerability with his granddaughter, Brolin draws your eyes to the screen. Even in the numerous moments where he’s just a quiet, intimidating presence, you want to watch him. So it’s a shame that he feels smothered by numerous other characters and plots, and doesn’t even get an opportunity to talk that often till the back half of the series when the giant hole needs to be explained.

The other actors, most of whom are engaging with the non-sci-fi premise, are generally relegated to showy performances or an absence of depth altogether. Pelphrey and Pullman, as Abbott’s sons, are left to deal with the fallout of having accidentally killed someone, but instead of making their secret interesting it’s generally hearing both of them whisper-talk about either Perry’s missing wife or Rhett’s desire to leave his rodeo days, and Wyoming, forever. Each has such a bland presence that if they didn’t look different you’d confuse who they were. The same goes for the Tillerson boys played by Shaun Sipos and Noah Reid. The only distinction between them is Reid’s Billy bursts out into song at the weirdest times.

Poor Lili Taylor, who plays Royal’s wife, falls into “concerned wife on the phone/leaning on the counter/hiding in the barn” territory and is given such short shrift her name doesn’t appear to be mentioned until halfway through the series. She’s left to react to what people are telling her. In one episode close to the finale she’s given her biggest moment: wailing and screaming in the dirt for what feels like an eternity while a man looks at her like she’s crazy.

And then there’s Imogen Poots as Autumn Rivers, the mysterious hippy, possible poor little rich girl, and maybe living incarnation of the Devil who shows up on Royal’s land one day. Her intentions are easy to see the moment she meets up with him in the middle of the night near the hole. The two are bound by the giant mass in Royal’s field, but as the series progresses Poots is left to become a stark raving nut, talking to herself in mirrors like she’s Elizabeth Holmes (her voice drops an octave in one episode) and acting like a Jerry Springer participant in a bank when the teller won’t let her bring her gun in. Her and Reid’s Billy develop something one assumes is a relationship: The amount of disgusting tongue cleanings the two give each other’s mouths, complete with camera closeup on their spit, is a trigger warning in itself. That scene in the bank concludes with Billy bursting out into Vanessa Williams’ “Save the Best for Last” because why not?

And that’s really how this series feels, like someone said “Why not” to everything. Even once the hole itself is explained, it feels like a sloppy set-up to trick audiences into watching Season 2. “We got you to watch these eight episodes, now you gotta come back next time to see what we do with this information.” But with how much the series shifts from semi-serious to outright comically deranged in the back half audiences will probably be too confused by how aimless the series seems to stick with it. And it’s a shame because Brolin on our TV screens every week is should be a treat.

If you’re looking for something wholly new, then, sure “Outer Range” certainly keeps you guessing. But I do wish it had just decided to rip off “Yellowstone.” Brolin’s good and if the series eschewed the sci-fi conceit there’s enough good actors here to at least make it entertaining. But slathering a sci-fi element on top of it and not understanding what tone to strike doesn’t lead to oil, it leads to crap.