Phillip Schofield, 58, was joined by Holly Willoughby, 39, back in February when he revealed on national television he was gay. The This Morning star has previously spoken about how it was only ever his co-star who he wanted to talk to about his life-changing news live on air as she had become a dear friend to him in his darkest hour. Some months down the line and with his latest autobiography detailing his coming out journey, the ITV presenter still gets very emotional speaking about his colleague, who continues to be a huge support to him.

Speaking with Chris Evans, 54, on his Virgin Radio Breakfast Show on Friday morning, Phillip broke down in tears when the interviewer began to speak about his co-star.

Paying tribute to his friend and colleague, the father-of-two explained: “Holly has been astonishing. Literally, the best mate.

“She’s serene and calming and sensible and balanced. Not just for me but also for Steph,” the presenter told the former Top Gear star.

The mother-of-three was the very first person at work The Cube host confided in about his secret after sitting down with his wife of 27 years, Steph Lowe, and the couple’s two daughters to explain how he felt about his sexuality.

It was in his dressing room the former children’s television presenter spoke candidly to his friend as she became increasingly worried about him. 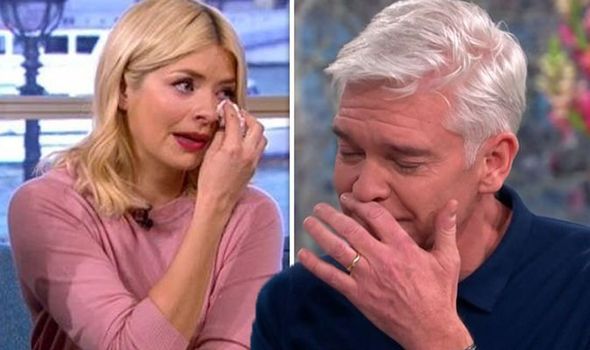 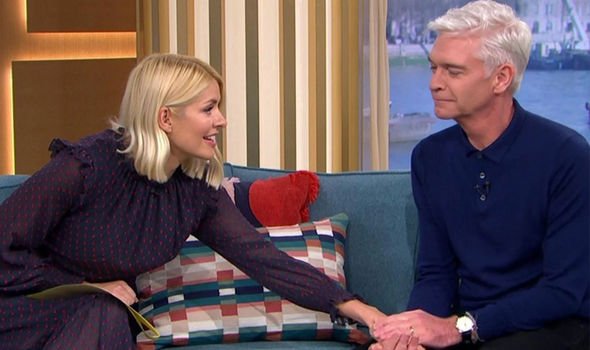 After Phillip finally told Holly what was playing on his mind a year ago, the presenter said she saw a little white feather outside his dressing room.

“She picked it up and gave it to me, and she said ‘see, it’s all going to be okay.’ The feather is still in my wallet,” he explains in his autobiography, Life’s What You Make It.

The This Morning presenter went on to tell Chris on Friday why he had to tell those around him and the world what he was going through.

“I just wasn’t me anymore. I lost me. And I still haven’t found me, if I’m honest,” the father-of-two admitted. 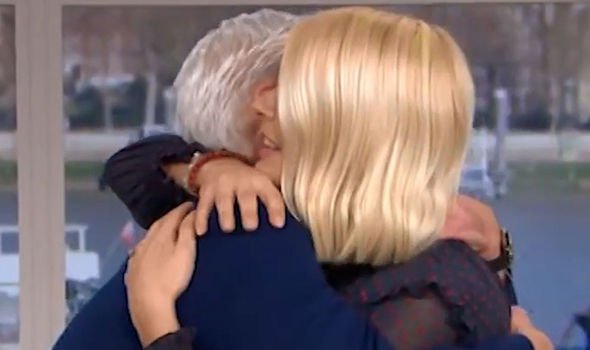 Holly has been astonishing

“I’ve tried all the way through this – writing the book – and the few interviews that I’m doing – to be as honest as I possibly can be,” Phillip continued.

“And I don’t know that I’ve necessarily found me yet. And I think it’s okay for me to look,” he added, before explaining how Holly has brought some lightness back into his life.

“I have recently found myself finding it easier to laugh more – it’s always funny with Holly, we always have a laugh.

It was on Friday, February 7, 2020, Phillip sat down with Holly on the This Morning sofa to give the interview, taking over from hosts Ruth Langsford, 60, and Eamonn Holmes, 60.

Originally, the father-of-two had wanted to make the announcement whilst he and his co-star were presenting the show on Thursday.

However, it was his colleague and friend who told him to leave until the end of the week as she didn’t want to present the programme without him.

Speaking on The One Show earlier this month, the former children’s television presenter explained: “I said to Holly ‘I’ll do it on a Thursday morning and then I’ll go and you carry on the show with someone else’.”

“We were in a bar in London, secretly having this meeting and she said, ‘You’re joking? There’s no chance that you’d leave and I carry on’,” he continued.

“And so she said, ‘We’ll do it on a Friday and ask Eamonn and Ruth if we can nick 10 minutes of their show and then we leave together’.”

Ruth and Eamonn did carry on the show after offering their support to Phillip, who has continued to host the programme ever since.

The presenter has also received support from swathes of the public, as well as many of his famous friends in light of the interview.