Who knew there’d be a day when we’d see sharks actually walking outside the water?

Well, that day has arrived – and the footage is truly amazing to behold.

Shark Week on Discovery has been awash with incredible moments this year, taking viewers under the surface to watch moments including a great white shark breaking into an underwater cage holding a diver and a camera capturing what a tiger shark’s mouth looks like from the inside.

Adventurer and TV personality Forrest Galante was joined by his team on the programme Island of the Walking Sharks as they filmed a fascinating species of shark that actually have the ability to walk using their fins, called the epaulette shark.

While your first thought of a walking shark might be imagining it standing upright like a human, that’s not quite how it works – but the reality is mind-boggling to witness.

Forrest was closely inspecting as the shark used its fins to drag itself out of the water and travel across rocks on land, explaining how ‘incredible’ it was to see firsthand. 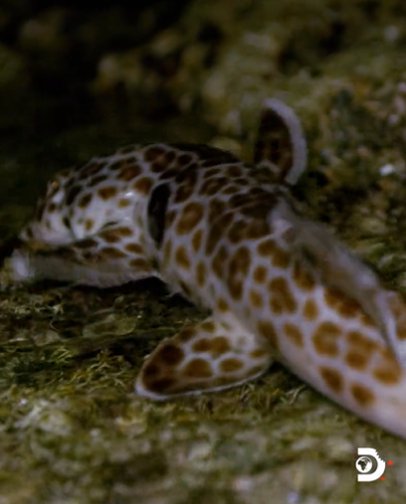 ‘Look at him using those fins. This is so incredible,’ he said, as he watched the shark going ‘up and over the rocks’.

‘This is spectacular! This is the first time in history one of the Papuan species of epaulettes has been documented walking,’ he said, emphasising how momentous an occasion this is.

The conservationist then added: ‘How amazing is that, to see a shark leave the water and come onto land. The only-known shark in the world that will walk out of the water and over land.’

Viewers at home were similarly impressed to have the chance to take a close look at the shark, who’s ability to ‘walk’ on land is extremely rare.

‘Solid science, stunning reefs, rare wobbegongs, and some real-life Indiana Jones encounters including a cave full of ancient skulls. One of the best #SharkWeek programs ever!’ one person tweeted.

‘Worked w/ brown banded bamboo sharks but epaulettes are a level up. Amazing footage. So dope,’ someone else said, while another joked: ‘Well nowhere is safe now. Sharks are now on land.’

In another Shark Week programme that recently aired, a diver got more than he bargained for after a great white left a ‘poonado’ in its wake.

Dr Charlie Huvaneers and his team were exploring the shark-infested waters to try and get to the bottom of what great whites eat and why… but their endeavours led to them experiencing a disgusting incident in the ocean.