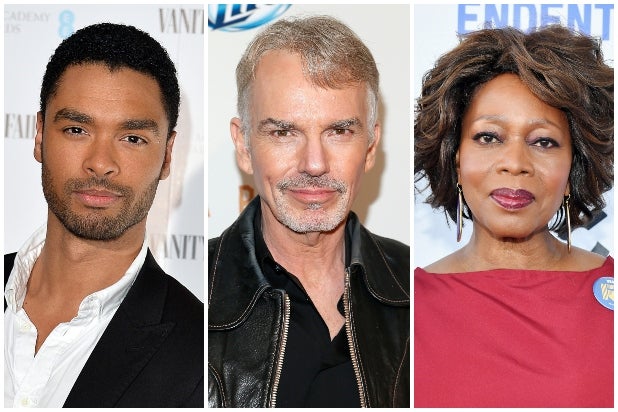 “Bridgerton” breakout Regé-Jean Page, Billy Bob Thornton and Alfre Woodard are set to star with Ryan Gosling and Chris Evans in the next film from “Avengers: Endgame” directors Anthony and Joe Russo — a big-budgeted spy and espionage thriller called “The Gray Man” that the brothers will direct at Netflix.

Ana De Armas, Wagner Moura, Jessica Henwick, Dhanush and Julia Butters round out the rest of the cast.

Joe Russo wrote the script — with a polish by Christopher Markus and Stephen McFeely — based on the book and series “The Gray Man” by Mark Greaney.

“The Gray Man” follows Court Gentry (Gosling), a legend in the covert realm, who is an expert at completing any lethal task and then disappearing. But he’s now being pursued by a former CIA colleague of his, Lloyd Hansen (Evans), once they feel that Gentry has outlived his usefulness.

Its budget could exceed $200 million, an individual with knowledge of the project told TheWrap.

The Russo Brothers’ AGBO will produce the film, brothers and Mike Larocca listed as producers along with Joe Roth and Jeff Kirschenbaum for Roth Kirschenbaum.

“The Gray Man” — which has the potential to become a franchise at Netflix — hopes to begin production shortly.

The book series dates back to 2009 and was followed by eight sequels. They were meant to be turned into a franchise in the past, including with “Mission: Impossible” director Christopher McQuarrie attached and in a separate project starring Brad Pitt as directed by James Gray.

Best known for breaking out on the smash hit Netflix series “Bridgerton,”  Regé-Jean Page will next star in the ensemble “Dungeons and Dragons” at Paramount.

Thornton most recently wrapped production on the fourth season of his “Goliath” series over at Amazon.

Woodard will next be seen in Sony’s “Fatherhood” opposite Kevin Hart.

Alfre Woodard is repped by ICM Partners, Circle of Confusion and Gochman Law.