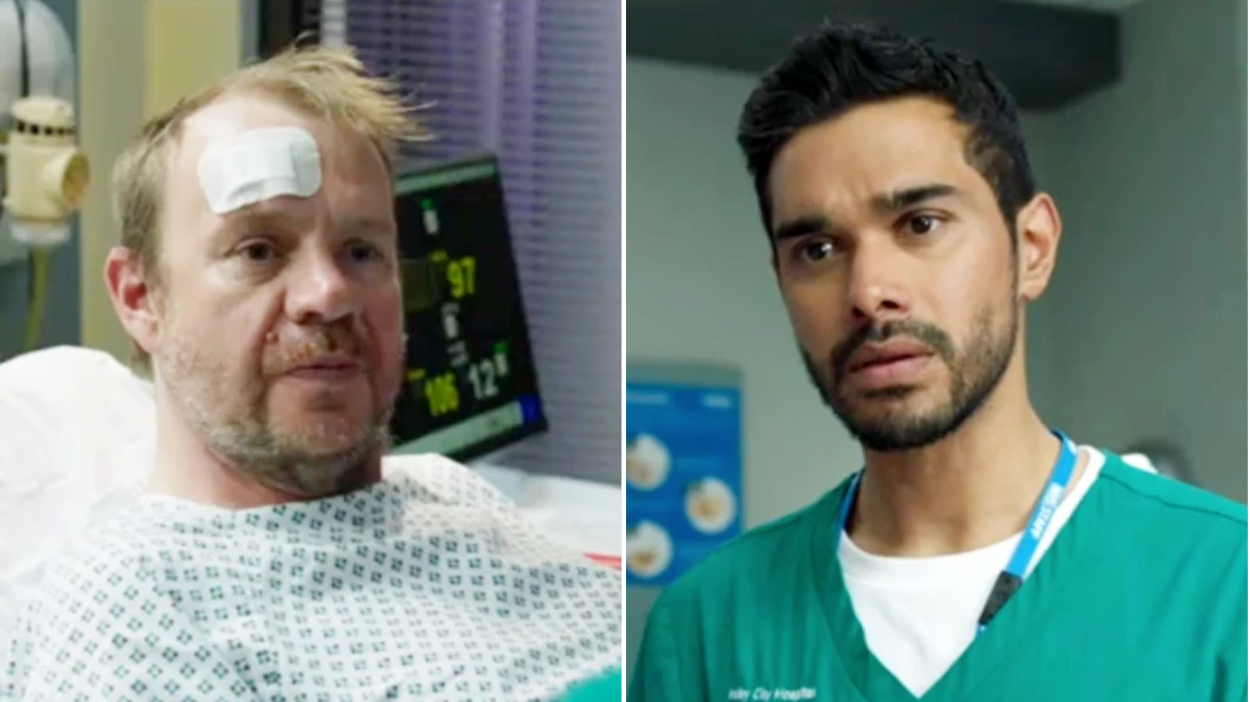 Tonight’s Casualty started with a shocking incident in which a car ploughed into a group of people trying to help a man who was ill outside a church where Paige (Shalisha James-Davis)’s choir was singing.

It was a situation with echoes of what happened outside the Finsbury Park mosque in 2017, and this only became clearer when all the casualties had been taken to hospital. Rash (Neet Mohan) was at first relieved that Paige hadn’t been hurt in the incident – she’d been looking after the ill man, Saul (George Eggay), when the van struck the crowd.

Then Rash went to treat the van driver, Carl (Llyr Evans), and he and David (Jason Durr) soon spotted some suspicious tattoos on his chest. David identified them as being far right emblems, and Rash began to wonder if it could have been a deliberate attack.

Carl insisted that he’d just blacked out at the wheel and had no recollection of what happened. The police decided to treat the incident as an accident, because there wasn’t any evidence to prove otherwise. Rash wasn’t happy with his and tried to get Paige to say that she’d seen the man fully conscious just before the van hit.

Paige wasn’t prepared to lie just to support Rash’s theory, and Carl told her the tattoos were just to do with football. Later he had a seizure, and it looked like he really had blacked out in the van after all.

Rash had to acknowledge he was wrong and he went to apologise to Carl – and that’s when things got really nasty. Carl made a racist remark and Rash tried to respond, then Carl grabbed him by the throat and nutted him in the face.

This wasn’t the worst thing to happen to poor Rash during the shift, though. Paige was becoming increasingly tired of his over-fussy behaviour, from his smothering attitude towards her when she discovered she had the BRCA gene, to the hideous healthy smoothies he makes for her, to the plan to meet his dad for dinner. She realised she didn’t want any of it, or at least not today, and left the hospital for a night out with Marty (Shaheen Jafargholi) instead.

Elsewhere, the name of Holby City’s sainted Jac Naylor (Rosie Marcel) is being kept alive with the Jac Naylor Award, and this was a prize Stevie (Elinor Lawless) very much wanted as it would enhance her career no end. Dylan (William Beck) refused to nominate her for it, though, due to her lack of people skills.

At the end of a shift in which Stevie clashed with Paige by revealing a man’s HIV status to his partner without his consent, Marcus (Adam Sina) said he’d nominate her for the Jac Naylor Award himself. After all, as he pointed out, Jac herself ‘wasn’t exactly a people person.’

In that sense Stevie is the perfect heir to the Jac Naylor crown – spiky, defensive, unpleasant, and sarcastic, but a brilliant doctor – as seen by her prompt life-saving action when a child was choking at the end of the episode.

She is actually very similar to how Jac was in her early days in Holby City, a woman who would ‘gladly sell her soul to the devil in exchange for a better job’ in Rosie Marcel’s own words. ‘She says the things that people wouldn’t normally say, or would at least think about first,’ she said.