The bloodshed from last week’s Tribal Council has yet to be mopped up, but from the sounds of it, things are about to get a whole lot messier.

In Survivor‘s three-hour season finale (airing Wednesday at 8/7c on CBS), five contestants who have outwitted, outplayed and outlasted their peers continue on in hopes of becoming the newest sole surviving millionaire. While it’s not typically the case, all five — Karla, Jesse, Cassidy, Owen and Gabler — have played very unique games and have proven their ability to find inroads to the end. But, as host Jeff Probst hints, there’s still a lot of game to be played before that check can be cashed.

Ahead of the season closer, we spoke with Probst about Jesse’s game-changing move, the show’s recent lack of villains and why this season’s cast played stealthier than ever.

TVLINE | Where does Jesse’s ousting of Cody fall in the pantheon of great Survivor moves, and what was going through your head as you were watching that all go down?
JEFF PROBST | One of the most enjoyable aspects of Survivor is you can never predict when a jaw-dropping move will be made. Everything has to line up. And every big move on Survivor is unique to the situation, the season and the players, so no two moves are ever the same. 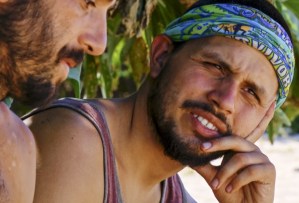 Jesse’s blindside of Cody was one of the most powerful Survivor moves of all time because it was so personal. Neither player is a villain, both players respect each other and appear to genuinely like each other. But Survivor is ultimately a game with a million dollar prize and you can never, ever, ever forget that. Cody is one of the most popular players to ever hit the beach and he was playing a very clever game. It’s easy to question why Cody let Jesse hold the idol, especially with only six players in the game, but that trust was their bond and it’s what made their alliance so powerful. That’s the risk reward of trust. Sometimes trust gets you to the end and sometimes it ensures you don’t.

In those moments, even though I have a fantastic front row seat, I am not experiencing the show as a fan; I am focused solely on my job. But what I will never forget is the moment when Jesse reached out to shake Cody’s hand. That was the moment that stayed with me because it transcended the game. That handshake was about their friendship moving forward.

TVLINE | In this new era of the game, it seems we don’t have as many villains as we used to back in the day. Why do you think that is, and is Jesse, perhaps, the closest thing we’ve gotten to one post-Season 41?
It’s an interesting observation that we don’t have as many villains. Obviously, a big part of that is related to the people we’re choosing to put on the show. I also think it’s a reflection of where the game is and where we are as a culture. They are always connected. Maybe villains are being redefined in this new era. Is Jesse a villain or just a savvy player, or is he both? He did just viciously betray his closest and most trusted friend in the game. And he was proud of the move. You could make a case that he’s a stone cold villain, but as you saw from the jury reactions, they seemed to ultimately respect the move. One of the things that I am enjoying in this new era is the respect players seem to have for big and often brutal moves. They don’t seem to take the betrayals personally, and if it’s not personal, then maybe there is no villain. 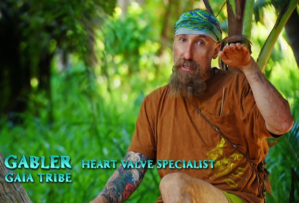 TVLINE | Who in this Final 5 has surprised you the most and why?
What is most exciting to me about the Final 5 is that each player has crafted their own very unique game and going into the last three days, any of the five could win. That’s very unusual. So it will come down to the immunity challenges and then the key decisions about who to keep and who to get rid of. This is always where the game is won or lost.

TVLINE | We’ve seen a lot of this cast play a stealthier, under-the-radar, “alli-Gabler” style game. Why do you think that trend took off this season, and is it one you think will continue going forward?
It’s another great observation. This was a stealth season. Nothing about the game design changed, it was just the mixture of players. At times it felt like groupthink was happening where all the players were afraid to make a move for fear of retaliation. As you note, it’s one of the things that has impressed me about Gabler. He assessed and adapted his game to fit in with the big picture flow of the game. That’s something you have to do every day. But I think it’s fair to assume that the groupthink ended with the Jesse blindside of Cody. That was a game changer. There are now five players left. It’s fully on and there is still more blood to come.

As for it being a trend, I don’t think so. I think this was a perfect storm of player personalities that left many feeling uncertain about what to do. Fear is normal in Survivor, but letting fear render you powerless is very atypical for a Survivor player. I am pretty sure there are a lot of people sitting on the jury that would play it very differently if they had a chance. As I’m fond of saying, if you don’t attack the game, the game will devour you.