The shocking latest episode has fans wondering about the fates of the Handmaidens after June Osborne (played by Elisabeth Moss) and Janine Lindo (Medline Brewer) escape Gilead and head to Chicago to join a group of resistance fighters. However, their journey isn’t so simple and The Handmaid’s Tale star Brewer divulged the real-life details of the escape scene that left the Hulu actor with a rash.

The Handmaid’s Tale has got off to a roaring start since its season four premiere.

Upon arrival, the pair joined a group of resistance fighters and prepared for battle against Gilead.

Despite the incredible sight of seeing the two finally escape in a difficult and dangerous journey in a “giant refrigerator”, star Brewer was, unfortunately, left with an allergic reaction to the substance used in place of milk. 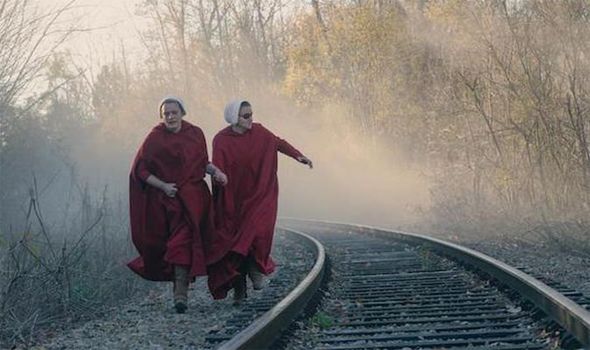 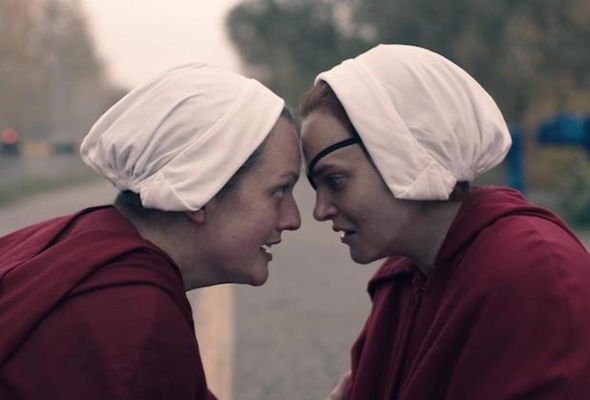 “They couldn’t do anything that would have a sediment that would fall to the bottom, and it had to be opaque enough so that our red robes could not be seen if we went under.”

Brewer and Moss were in the tank for around 12 hours, with Brewer admitting it was a lot of fun to be swimming about all day.

However, the ‘milk’ was not the greatest thing for Brewer after a long day of filming, adding: “I had an allergic reaction to it, I got a rash on my skin.” 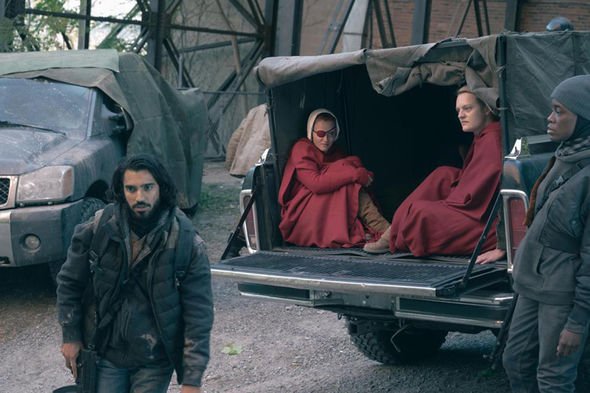 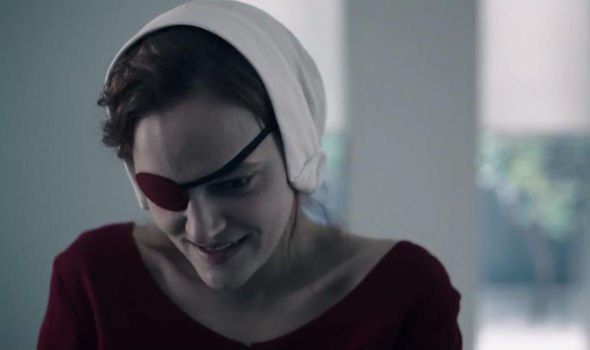 She did allay fears, however by insisting she was fine afterwards.

Brewer continued the conversation by adding that Janine is pretty much desensitised to rape and violence because of Gilead, even violence towards herself.

After Janine voluntarily sexually services an American fighter, fans were quick to comment on the decision, with one YouTuber writing: “The ending was basically saying, ‘this issue was rampant prior to Gilead’. Pretty clever way of showing that.”

Brewer also discussed the scene, claiming Janine doesn’t feel “morally corrupt” by her actions due to the harrowing treatment from Gilead.

Janine, in particular, has felt the full force of Gilead’s brutality along with her friends.

After repeated beatings, she had her right eye removed as punishment, and she became mentally unstable over the course of the seasons, particularly after giving birth to a daughter and not knowing where her son is.

June became aware early on that Janine’s son Caleb was killed in a car accident long ago but she told Janine that he moved away to California.

The two have often fought about Janine’s erratic behaviour but the pair’s recent escape to Chicago will, no doubt, bring them closer together as they fight for survival.

The next episode, titled Chicago, will undoubtedly focus on the pair’s continued attempts to flee Gilead’s forces in the US city.

Hulu is currently dropping new episodes on the streaming service every Wednesday, with the finale penned in for June 16.

However, a release date for fans in the UK remains up in the air, meaning fans will be waiting a while until they can see June and Janine’s journey outside the US.

The Handmaid’s Tale season four continues Wednesdays on Hulu in the US.