And we’re not just talking about the costuming. Both of the remaining competitors turned in really strong vocals in the season-ender, leading up to one of the closest contests in recent memory. Let’s review their performances and unmask some crooners, shall we?

BULL | At the top of the episode, Nick Cannon announced that each singer would perform two numbers: a “stripped-down acoustic” cover and an “all-out showstopper.” At first, I thought Bull’s first number — Des’ree’s “You Gotta Be” — was the former, but it quickly turned into the latter, with an impressive bunch of vocal gymnastics near the end. His second song, Hunter Hayes’ “Invisible” got the softer touch and earned him judge Nicole Scherzinger’s tears . 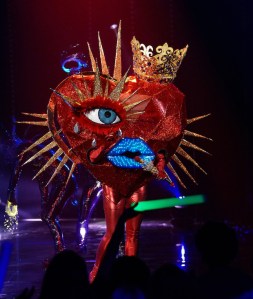 QUEEN OF HEARTS | “What’s Going On?” by Marvin Gaye was Queen of Heart’s first, quieter song — and if she’s not Jewel, she certainly did a great Jewel impression during it. Her showstopper was Katy Perry’s “Firework,” which seemed like a direct nod to those who’ve guessed that Perry was inside the chambers all along.

Now it’s your turn. What did you think about how The Masked Singer‘s sixth season turned out? Grade the finale and the season on the whole via the polls below, then hit the comments!