If you, too, have been personally victimized by the new Wednesday series—namely because you need a season 2 confirmation date from Netflix, like, yesterday—then you’ve come to the right place. The series is currently taking up the # 1 slot in the streamer’s Top 10 and shows no signs of being bumped off anytime soon given the instant acclaim. Enter: talks of Wednesday season 2!

Given the season 1 ending, it seems as though the streamer could have future storylines planned, but that doesn’t necessarily guarantee much since it’s not official official just yet. Even so, there are some things we *can* tell you about the potential continuation of the series c/o some good old fashioned snooping. Ahead, find every single thing we know about Wednesday season 2. 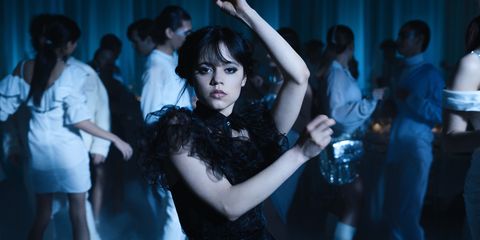 Okay seriously, will there be a Wednesday season 2 or not??

Sadly, nothing has been confirmed by Netflix just yet, but we do know the show’s creators and stars are super interested. Co-showrunner Miles Millar recently spoke with TVLine about continuing the series, saying: “We felt like we just touched the surface with those characters and the actors are so amazing in those roles…Catherine [Zeta-Jones] is, I think, an iconic Morticia. The relationship between Wednesday and Morticia is also essential to the show, and the idea that Wednesday is trying to forge her own path outside the family is important.”

Plus Alfred Gough (co-creator and executive producer of the Netflix dark drama) hinted at a possible follow-up, revealing, “Miles [Millar] and I are talking amongst ourselves about it. There’s definitely more that you can explore in the world of the Addamses.” Alfred also went on to say that just like with season 1, the plan is to feature the rest of Wednesday’s family in some of the episodes with the primary focus remaining firmly on Wednesday herself.

Actor Gwendoline Christie has also teased her return for a potential second season as well in a spoiler-filled quote (so scroll past if you haven’t finished season 1 yet!): “We haven’t seen her put in the ground, have we?” the Game of Thrones alum said in an interview with Digital Spy. “I feel like Larissa Weems would not really be prepared to entertain or be dominated by anything as commonplace as death.” No-ted!

Who has been cast in Wednesday season 2?

There’s no official word on who will return (or make their debut, for that matter) in a Wednesday season 2, as there’s no confirmation on whether or not it will be made. But because we know you’re curious, here’s everyone from season 1 who could be back should the show get more seasons:

Once again, it’s hard to guesstimate! How-ev-er, if we look at the timeline of season 1—which began filming in September 2021 and wrapped around March 2022 (adding in the ~8 months it took for the show to hit our screens)—we know the total turnover time from beginning to end was around a year and a month.

If Netflix wants another season and followed the same blueprint, Wednesday would need six months to film and eight months of post-production, which would leave us looking at an early 2024 release date! BRB, manifesting this timeline.